Even more creators on the landmark comic book announced in San Diego!

It’s a big day for Marvel Comics at San Diego Comic-Con 2019 as more news was revealed at This Week in Marvel’s panel! Marvel Editor-in-chief C. B. Cebulski revealed more creators working on MARVEL COMICS #1000, and the names are big — Neil Gaiman and Mark Buckingham! Globally acclaimed at the House of Ideas for their previous work on MIRACLEMAN, Gaiman and Buckingham are returning to Marvel to contribute to this massive creative collaboration of 80 teams for a super-sized issue celebrating Marvel’s 80th Anniversary. 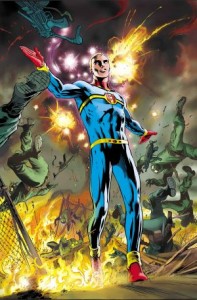 On top of that, at the SDCC 2019 Spider-Man panel, it was revealed that their one-page story would feature Miracleman. No word on a new series featuring Miracleman or Marvelman.