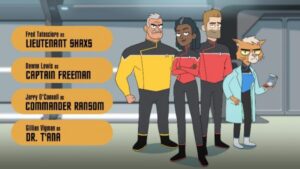 Today at San Diego Comic-Con®, fans were given the first look at the newest addition in CBS All Access’ growing Star Trek franchise, animated comedy series, Star Trek: Lower Decks, which will follow the support crew on one of Starfleet’s least important ships.

The Starfleet crew residing in the “lower decks” of the U.S.S. Cerritos, include:

Additionally, McMahan unveiled a thrilling first look at the holodeck of the U.S.S. Cerritos, below: