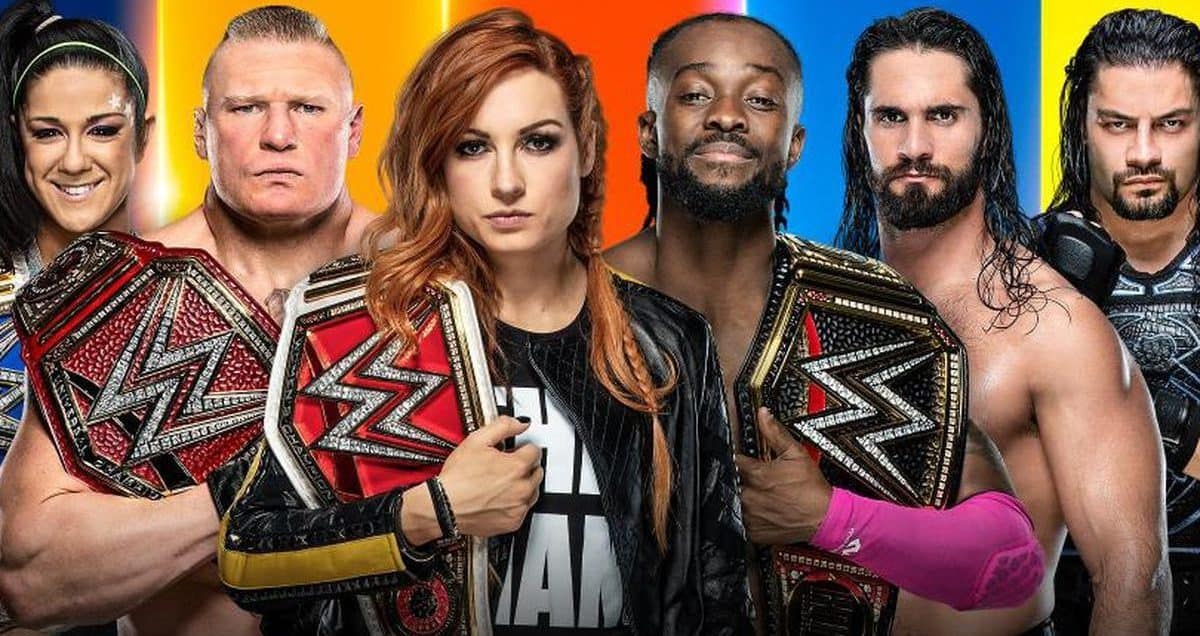 Well, NXT TakeOver Toronto was quite the incredible show and that left me hopeful that SummerSlam would follow suit. Okay, it wouldn’t be as good, but I was hoping it would go beyond what I was afraid it would be. With fingers crossed, I sat down to endure another WWE marathon.

1) A 2 hour kickoff show! We had (at 1 hour in) Drew Gulak successfully defending his cruiserweight title against Oney Lorcan, we had Apollo Crews against Buddy Murphy that was interrupted when Rowan killed Murph (result?), and we had Bliss/Cross successfully defending the women’s tag team titles against the Iiconics. The matches were meh, okay-huh?, and crap. Oh, and Edge speared Elias (I thought Raw Reunion was a couple of weeks ago).

2) We start the main show with Natalya v Becky Lynch. I said in the Roundtable I was looking forward to this match, and it delivered. Maybe not as good as LaRae/Shirai at NXT, but still incredibly fine. They did not stop and for 12 or so minutes they just beat the hell out of each other (that sharp-shooter on the top rope – awesome!), each going for the submission until Lynch retained the Raw Women’s title with the Dis-Arm-Her. Cool start. No, I mean really cool start.

3) Dolph Ziggler against Goldberg follows. Basically, Ziggles bounced like a pin-ball and essentially lost the match 3 times, as every time he lost, Ziggler could not keep his mouth shut. This is how Goldberg should have been booked from day one. So sue me, I liked it. All up, maybe 8 minutes. Oh, and Ziggler sold like a champ, but I have a feeling he really was in pain.

4) The US Title match between AJ Styles (c) and Ricochet felt off. The rest of the OC getting involved makes AJ look weak (though Ricochet running on their shoulders to rana Styles was a cool spot) and this just felt meh when I was hope for OMG! 12-odd minutes. Look, get rid of Gallows/Anderson, give them 20 minutes and just say: “TNA X-Division, circa 2004, and… go!”

5) Bayley successfully defended her Smackdown Women’s Title against Ember Moon. I was hoping Moon was going to show something… I was wrong. She was at Lacey Evans level of “should not be there”… especially when we’ve got LaRae, Shirai, Yim, even Baszlo in NXT (of course, when they leave NXT, their talent is sucked out of them and they never appear on TV, so stay there, ladies, where you can shine). Bleh match that they gave 10 minutes to.

6) Kevin Owens beat Shane McMahon in about 9 minutes. Look, it was fine for what it was, certainly watchable, but it was still Shane McMahon in a match when so many decent workers aren’t even on TV half the freakin’ time. Oh, and shaky cam has got to f’n go!

(I mentioned last night how good the commentators were. Can I say how freakin’ terrible they are tonight? You’d not know there was a match in the ring half the time. Just awful.)

7) Charlotte Flair defeated Trish Stratus in a match that lasted more than 15 minutes. This was actually on a par with the opening match, and so far tonight the best 2 matches have been women’s matches. But… Stratus is over 40, and she makes half of the younger roster look like rank amateurs. Now, it could be that Charlotte has inherited her father’s broomstick ability, but I don’t think so. Stratus deserved to be there, and this was a fantastic match. Seriously really good. And I actually hope it’s not Stratus’ last match.

8) Well, thank God Randy did the right thing and brought his working shoes. He and Kofi had a good match for the World Title… and then came the ending. A double count-out? After 15 minutes, that was the lameness we got? That actually ruined it, and again Kofi snuck in a win/retention. Yes, it makes him look wily and clever, but also makes him look like he can’t hang with the others.

9) Bray Wyatt as The Beaver Fiend squashed Finn Balor like a bug. Less than 4 minutes and mandible claw and that was it. Wyatt’s entry lasted longer than the match. I said it in the Roundtable, I say it here – next month it’ll be Fiend v Demon, then they’ll form a tag team… Blergh.

(Is it just me, or is The Fiend just Beetlejuice amped up to 11?
Oh, and some-one put Bray Wyatt in a horror movie as the villain ASAP. He has that sh*t nailed!)

10) And we had a main event that surprised the hell out of me. Brock Lesnar (c) v Seth Rollins for the Universal Title. Okay, what surprised me?
a) It was 15 minutes of decent in-ring action.
b) It was an even match.
c) Seth Rollins won.
d) Brock Lesnar was pinned clean in the centre of the ring, which makes his getting the MitB case, winning the title and everything else he’s done as an opportunist now make sense. Was that good long-term booking by WWE or just fluke? Well, Heyman was involved, so let’s call it 50-50. Still, new champ, good match, great way to end the show, and the crowd went home happy.

Now, this weekend I watched a LOT of wrestling. Not as much as Wrestlemania, but that was just mentally painful. Best match this wekend – Cole/Gargano. If you watch nothing else from this weekend, watch that. But the next 3 matches on my list for the weekend were LaRae/Shirai, then a tie between Neidhart/Lynch and Flair/Stratus – all women’s matches. Well, at least one part of the WWE is going well and working.

But SummerSlam 2019 was a good show, one of WWE’s best for the year (not under the NXT banner). I enjoyed it on the whole, and I can’t ask for much more than that.