Beware of the Blob! Nearly 30 years after Steve McQueen fought the original icky and oozy invader from space, the nightmare was back on Earth. Could people in 1988 have a better chance dealing with the growing threat? The movie came out in the late part of the summer and offered up a bit of retro horror with a dash of modern fears. The cast included Candy Clark (The Man Who Fell To Earth), Donovan Leitch (Breakin’ 2: Electric Boogaloo) and Kevin Dillon (The Doors and A Midnight Clear). The film did well on home video back in the VHS era and now you can appreciate it even more with The Blob Collector’s Edition Blu-ray from Scream Factory. There’s plenty of bonus features to give a sense of what everyone had to do to make sure audiences were terrified by monster that was toxic Jell-O. Here’s the press release from Scream Factory: 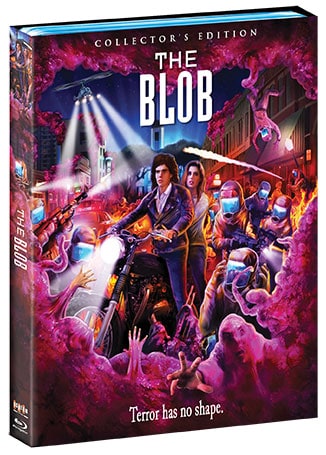 The Blob is back in this horrific tale about a vile, malignant life-form that crashes to Earth in a cozy, rural American town called Arborville. Untroubled by conscience or intellect, the Blob does only one thing – and it does it well. It eats anything and everything that moves: men, women, and children. It wants to swallow the entire town of Arborville. The original version of the Blob thrilled and terrified movie audiences back in the 1950s. Now the oozing, gooey killer is back. On October 29, 2019, SCREAM FACTORY™ is thrilled to present THE BLOB Collector’s Edition Blu-ray. Directed by Chuck Russell (The Scorpion King), the film stars Kevin Dillon (Entourage), Shawnee Smith (SAW movies), Donovan Leitch (Glory), Jeffrey DeMunn (Billions) with Candy Clark (American Graffiti) and Joe Seneca (A Time to Kill) as Dr. Meddows. A must-have for sci-fi horror enthusiasts and movie collectors, this definitive collector’s edition contains special bonus content, including two new audio commentaries, over four hours of new interviews, and more. Preorder is available now at ShoutFactory.com