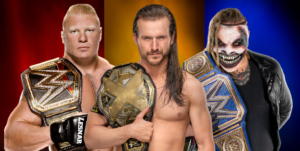 Well, first things first – after NXT TakeOver WarGames, I was really looking forward to this PPV. Having said that – why in the hell would you have NXT superstars so prominent on SurSer when they had just been through WarGames the night before? That makes absolutely zero sense.

My prediction going in would be Raw and NXT equal on points, with Smackdown taking up the rear with one win. Let’s see how I go! Let’s see how the show goes!

1) Cross-branded Over The Top Rope Tag Team Battle Royal (and that was what they called it): The OC v The Revival v Forgotten Sons v Dolph Ziggler/Robert Roode v Street Profits v Curt Hoawkins/Zack Ryder v Breezango v Lucha House Party v Imperium v Heavy Machinery (SS-1)
Unless I miss my count, there’s 10 teams… so how does that work? Why does one brand get an advantage here? This was just a battle royal. Nothing special. A lot of men just hitting each other and throwing them over the top rope. The crowd is still filing in, it lasts for less than 10 minutes and Roode/Ziggler win to give Smackdown the first points. I don’t mind that they won (I like the team), but the match was just dull TV filler.

2) Cruiserweight Title Match: Kalisto v Akira Tozawa v Lio Rush (c) (SS-2)
These three put on a good WCW-style cruiser match, but if they wanted to do a spotfest, then I’m afraid AAA and AEW make them look a little lacklustre. They still had their seriously contrived spots – the double Spanish fly by Rush, for example – and it was entertaining and fun. Not too bad, really. The last few minutes of near falls and finishing moves was particularly nice. Rush retains.
Raw – 0, NXT – 1, Smackdown – 1

3) The New Day v Undisputed Era v The Viking Raiders (SS-3)
Ah, poor Kofi – from world champion to being on the Kickoff Show… This was actually a good match. Each team got a chance to show what they’ve got and there were some inventive three-way spots. Ivar avoiding Total Elimination (“High-Low”) by cartwheeling was kinda cool. The Viking Raiders get the win over the Undisputed Era. Good match.
Raw – 1, NXT – 1, Smackdown – 1

4) 5-woman Survivor Series Women’s Elimination Match: Smackdown (Sasha Banks, Dana Brook, Carmella, Lacey Evans, Nikki Cross) v Raw (Charlotte Flair, Asuka, Kairi Sane, Natalya Neidhart, Sarah Logan) v NXT (Rhea Ripley, Bianca Belair, Io Shirai, Candice LeRae, Toni Storm) (SS-4)
I like the 3-on-3 in the ring, not two-on-two. Good. Let’s look at the teams – NXT and Raw are stacked, no dead weight; Smackdown has one decent wrestler (Cross). That means Smackdown will probably win… let’s see. Started off slow, but then they all came in and just hit move after move and then it didn’t stop. Two NXT are taken to the back injured; playing off WarGames – nice. And then the eliminations start. Flair is misted by Asuka, showing that team cohesion is not brilliant. Back and forth, until we end up with Ripley v Banks. That’s when LaRae and Shirai return to help Ripley get the win. It needed three of them to defeat that sack of suck Banks? Okay – WarGames last night, but still… And Asuka just walked away, so wasn’t she eligible to come back? Look, it was actually a really good SurSer match, I just had an issue with 4 members of the Smackdown team being involved. Has this weekend been Rhea Ripley’s coming out party or what?
Raw – 1, NXT – 2, Smackdown – 1

5) Shinsuke Nakamura (IC Champ) v Roderick Strong (NA Champ) v AJ Styles (US Champ) (SS-5)
Much like the tag match on the pre-show, all three men got a chance to show what they can do, and the match was given a reasonable amount of time. But it felt like it was a little muted. There were big spots, sure, and high spots, but it felt quiet. Don’t get me wrong – it was a really good match. I just felt these three could have had so much more. Shame. Maybe it was following the women’s match and everyone was emotionally drained. In the end, Strong won, though, taking advantage of Styles phenomenal forearm to pin Nakamura, and he certainly looked the goods out there.
Raw – 1, NXT – 3, Smackdown – 1

(Bonus Thought: What a weird interaction between The Miz and Daniel Bryan…)

6) NXT Championship Match: Pete Dunne v Adam Cole (c)
This match would not have been out of place on an NXT TakeOver show. This was a really strong match from both guys, considering what they went through last night… especially Cole taking that move from the top of the cage through the tables… Wow. This was a really good match, and what made it even better was the fact they played off the injuries both men sustained at TakeOver the previous night. Look, putting this match on the WWE PPV was good for NXT, but it did do something I think the WWE might not have considered – it made the Raw/Smackdown title matches suffer in comparison. Cole retained after around 15 minutes of goodness.

7) Univeral Championship: Daniel Bryan v The Fiend Bray Wyatt (c)
Enough with the freakin’ red lighting! It makes these matches awful to watch! Well, Bryan was game and I think he’s showing that he might just be recovered enough to go back to the top of the promotion. He might have to tone things down (like Austin post-neck surgery), but is that a bad thing? Sorry… there was a match. It was okay. Bryan made it. But the lighting and the gimmick over wrestling of The Fiend hurt it. Fiend retained with the usual.

8) 5-Man Survivor Series Elimination Match: Team Raw (Seth Rollins, Randy Orton, Ricochet, Kevin Owens, Drew McIntyre) v Team Smackdown (Roman Reigns, Braun Strowman, Ali, Chad “Shorty G” Gable, King Corbin) v Team NXT (Tommaso Ciampa, Damian Priest, Matt Riddle, Keith Lee, Walter) (SS-06)
Unlike the women’s match, there was only one wrestler who I did not think should have been out there – King Corbin. Even Randy Orton has been bringing it a bit more lately. And where the women’s match showcased Ripley, this was Keith Lee’s time to shine, and he grabbed the opportunity with both hands. They went for the 1-on-1-on-1 as well, like the women, which is good. Some of the eliminations felt a little odd, like moves that they normally would have kicked out of on a PPV pinned them, with little or no build-up or wear-out. Dissension in team Smackdown was there, Orton RKO’ed some-one after being eliminated, a lot of 1-on-1 bits occurred, and stuff like that happened. Apart from that, it was another really strong SurSer elimination match. Final two were Reigns and Lee (!) but Reigns got the win with the usual. Nice post-match show of respect.
Raw – 2, NXT – 3, Smackdown – 1

(Why is Walter put down as WALTER? Does it stand for something? Wrestler And Lad That Eats Radishes? We All Like Those Endearing Russians? Welcome All Luddites To Emergency Rooms? What?)

9) No Holds Barred No-DQ Match for the WWE Championship: Rey Mysterio (not Jr) v Brock Lesnar (c)
Rey’s gone for the Joker motif tonight! Look, this match is not going to win any awards for work or anything else, but it was a fun match. I really enjoyed it. I liked the stuff with Domenic, I liked the stereo 619s, the double frog splashes, Heyman’s introduction (Lesnar’s weight as “about two and a half Rey Mysterios”), Lesnar’s selling and taking of everything was really good, it was just fun. And it was less than 10 minutes long, so it didn’t overstay its welcome. Look, Lesnar won, but Mysterio could have taken that title off him…

(Domenic could well be a decent 2nd generation wrestler in a few years.)

10) Bayley (Smackdown Women’s Champion) v Shayna Baszler (NXT Women’s Champion) v Becky Lynch (Raw Women’s Champion) (SS-7)
Not sure what it was, but this match just did not click. If it was a clash of styles, poor 33-33-33 booking or what, but it felt off. There was way too much 1-on-1 with the third out of the ring. Sure, there were a lot of two-counts and some nice moves, don’t get me wrong, but it lacked something. To be honest, I think the crowd was drained, after everything else, and it affected the women somewhat, plus Baszler having gone through the WarGames match the previous night. Maybe this match and the men’s SurSer match should have been swapped over? Anyway, Baszler got the submission win over Bayley (who isn’t the weak link?) and then, post-match, Lynch took Baszler out to… get her heat back? Send the crowd home happy? What was the purpose for that? Setting up a Lynch-Baszler match for TLC? Actually, I’d be down for that.
Raw – 2, NXT – 4, Smackdown – 1

This show was exactly how the WCW invasion should have gone down. Like I’ve said in the past – Vince would be president of the USA now, not Trump, with the money he would have made if they had done that.

Okay, my prediction was wrong. This was a dominant win for NXT – they had more wins than Smackdown and Raw put together. And, watching the shows, that would be about right as well.

I have no idea what this means going forward. But this was actually a good WWE PPV. When your only real weak link was the opening battle royal (though the main event was more meh than anything), then it was one of the better for the year.