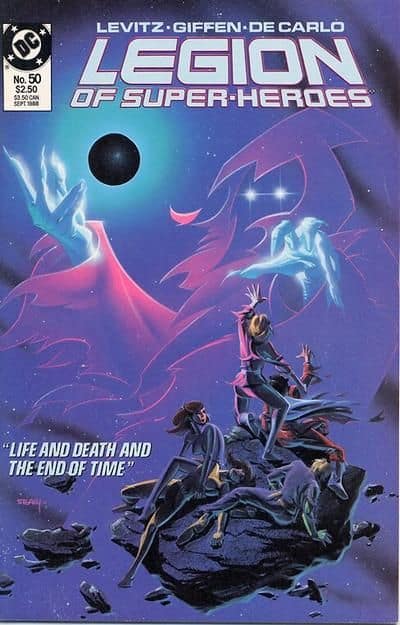 Spoilers (from thirty to thirty-one years ago)

Paul Levitz had been on the Legion of Super-Heroes for about eight years when his former co-plotter and penciller Keith Giffen returned to the title and his former roles in 1988.  Levitz showed no sign, at least from this reader’s perspective, of slowing down or missing any steps with the title, but during his absence as the regular penciller (it had been about four years), Giffen became a huge star at DC, largely because of his redesign of the Justice League with JM DeMatteis and Keith Maguire.  That’s the main reason why my thirteen-year-old self was excited to see him return to the Legion, and that’s what caused me to become a regular reader of the title.

Of all the columns I’ve been writing about the Legion over the last few months, this is the first where I didn’t buy a single issue in a back-issue bin, but instead got them new on the stands (okay, I think I got #50 after I read #51 or 52), and it is during this time that I became obsessed with learning Legion history and who all these characters were.

Giffen’s return heralded a major tonal shift in the book, as it got both darker and funnier, and began building towards a huge finish that would change the title forever.  I am very excited to get back into this era, a time of matching jackets, weirdness (Brainy builds Computo to look like a tiny Validus for some reason), and magic. I remember that Giffen started to draw the characters as older and more weathered, as the team caught up to the darker feel that began to spread across much of the DC universe. 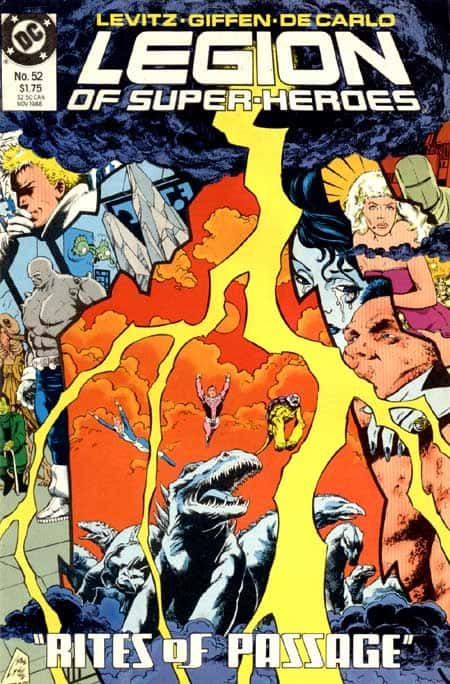 And that doesn’t just end this series, but also ends a very lengthy run (just over 100 issues, counting Annuals and miniseries and stuff) by Paul Levitz.  I want to come back to what Levitz contributed to the Legion, but first I want to discuss this run on its own merits.

When Giffen returned to the book, it was clearly with the express purpose of dismantling the team, and putting it up against some of its biggest challenges.  The members of the “conspiracy” almost pulled the team apart, and then in their fight with the Time Trapper, one of Luornu’s selves was killed, and Mon-El was put out of commission for the rest of the series.  After that, other Legionnaires left the team (Brainiac 5, White Witch, Quislet, Dream Girl, and effectively, Shadow Lass), went through massive changes (Blok), and nearly everyone took on a darker, more complicated look with the new uniforms.  It felt like this title was making a serious break with its past, which coincided with a more troubled time in the universe.

The fight with the Emerald Empress was more difficult than we were used to seeing, and that presage the difficulty the team would have with the Archmage, which ultimately led to the death of Magnetic Kid, and massive destruction across the galaxy. 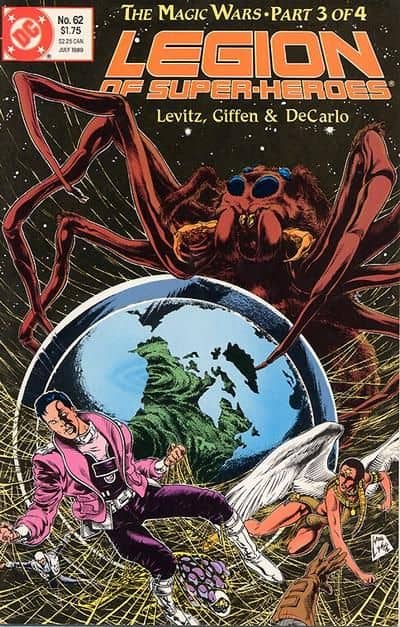 It was very cool, in the last issue, to see the various members of the team come back together to help fight, and on the last page, Sensor Girl’s speech left readers hopeful for a better version of the future.  Of course, we weren’t ever going to get to see that future, as when the title relaunched, things were drastically different, and a lot darker.

When this title ended, it did a good job of checking in on many minor characters, giving us a last look at some of the former Substitute Legionnaires, as well as the Heroes of Lallor, and our favourite Science Police officers.  What we didn’t get to see is what happened to Shadow Lass and Mon-El though, which is a little odd.

I found that this run contained more character development than the previous one, with a few characters getting a lot of the spotlight.  Levitz and Giffen made Polar Boy a very interesting, but also kind of tragic character. Giffen’s portrayal of him grew more chaotic as he started to lose his grip on the team – instead of being the earnest cleancut hero of Larocque’s term as artist, his hair became a jagged tangle of icicles, and his uniform looked ill fitting and as disorganized as his approach to leadership.

By contrast, Sensor Girl’s new costume had a completely blank face, making her even more inscrutable than before, while also embracing some of the more baroque trappings of her royal upbringing.

I loved the new costume designs, with a few notable exceptions.  I don’t understand why Tellus, who was always portrayed as naked save for the atmosphere-containing helmet he wore, would suddenly need shoulder pads.  I also hated the design for Chameleon Boy, which has him wearing a purple hood, but at the same time, he was barely in these comics, so it doesn’t really matter.

A number of the most central Legionnaires disappeared during most of this run, especially Phantom Girl and Ultra Boy.  It was cool that it gave Giffen and Levitz space to focus on characters that don’t usually get so much of the spotlight, but it was kind of strange to realize that they’d been absent for months.

It’s interesting to think about this run in the context of the rest of the DC Universe.  The post-Crisis era had solidified, and things were getting progressively darker and stranger in many corners of the DC universe, but this was also the time when Giffen’s work on the Justice League was widely applauded for being light-hearted and fun.  It was also during this time that Giffen was involved in the launching of LEGION ‘89, the terrific precursor series that featured ancestors of the current team as leaders of an intergalactic police force (I’ve already written about that series, starting here). Given how things were getting darker in the present day, it only made sense that DC’s vision of the future would be a little less Utopian.

Giffen’s art had changed a lot leading to this era, when compared against his work during the Great Darkness Saga, for example.  His characters and environments had become blockier, and more dense, and clothing got a lot more complicated. His eye for layouts was always a little odd, and that stayed consistent through this run.  Another thing he did was make the characters, especially Saturn Girl and Dream Girl, start to look older. The Legionnaires were definitely not kids anymore, and it was time that their look started to reflect the fact that they were, unlike present-day DC comics, aging in real time.

I don’t want to make it sound like I think Giffen is behind everything new and exciting in this title during this run.  Paul Levitz’s influence is everywhere, especially in the way that so many characters are juggled around the plotlines, and in how stories are planted months earlier like seeds.  There is a clear synergy between Levitz and Giffen that really helped to enhance these comics. 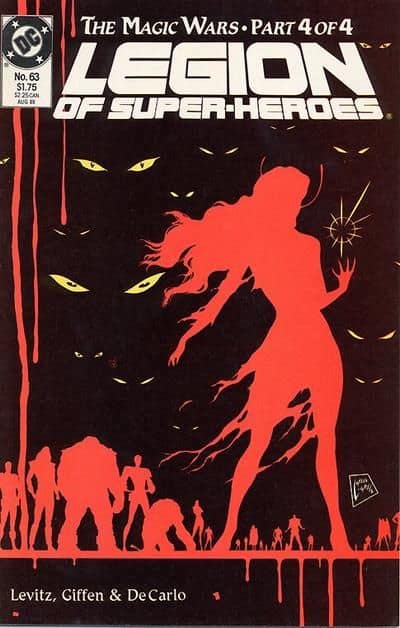 Levitz has written other things since his time on the Legion, but I feel like it is what he will always be best remembered for.  There has never been a time since this run where writers became as connected to a certain title, and given the chance to stay there for about a decade (Wolfman on Teen Titans, and Claremont on X-Men are the only other two runs that rival this one for length and influence), with the possible exception of Bendis and Ultimate Spider-Man.

When Levitz left, so did colourist Carl Gafford, who had been with the title for like seven years.  That’s pretty notable.

After this title ended, and a three month break in publication, the Legion returned with one of the most challenging and exciting comics of the late 80s and early 90s.  This is when Giffen jumped ahead five years in the story, and in the process, broke the team and most of its members. I largely started this entire Legion project because I wanted to reread the Giffen/Bierbaum Legion, often referred to as the 5YG Legion (for the five year gap) that attempted to bring continuity into line, and replaced characters like Superboy and Supergirl with new ones who were retroactively always part of the team.  I’m going to have a lot to say about this series, and can’t wait to get into it.

These comics have never been collected in trade paperbacks.