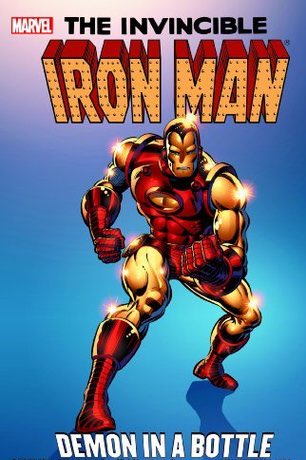 Spoilers from forty-one years ago

I’ve been wanting to tackle Iron Man in my regular Retro Review column for a while now, as I’ve been wanting to trace Tony Stark’s evolution as a character (I really don’t remember him as the smart ass Robert Downey Jr. portrays from my childhood), but the longboxes with my Iron Man comics is in a very inaccessible place at my parents’ house, and I’ve not gotten around to digging them out yet (there’s just always so much else to read).  In preparing for that possible future column, and filling in some gaps in my collection, I was thinking a lot about the time when Jim Rhodes took over for Tony, because he was on a bender. I’ve been thinking about how groundbreaking this was at a time when people didn’t often replace characters for extended stretches in comics, and when black characters weren’t given such prominence.

And then I realized that this storyline, which was my introduction to Iron Man as a youngster, was not the famous Demon in the Bottle storyline, and that Tony’s struggles with alcohol came much earlier.  Somehow, I had no clue.

And then, fate put a discounted trade of that story into my hands, and it was time to at least tackle this story, while the later stories remained inaccessible.  I’d always thought that Denny O’Neil was the person who made Tony an alcoholic, but no, it was classic Iron Man writer David Michelinie (O’Neil, who also made Speedy an addict, would go on to write the Rhodes issues, so my mistake at least makes sense).

I’m excited to dive into this storyline, and finally experience one of the earliest examples of “serious superhero comics” there ever was.  I’m also excited to experience some very early John Romita Jr. artwork.

Let’s find out how it is.

Okay, this is not really what I was expecting.  The choice of issues for inclusion in this trade are strange.  The stuff about SHIELD wanting to quietly take control of Stark International is revealed only through flashback, as it’s the issues before #120 that contain that.  I’m not sure why 120 is the starting issue, except that it shows Tony downing back martinis on an airplane before going into action as Iron Man. Likewise, the SHIELD story is not resolved in this trade at all, while Tony’s drinking seems to be shelved as quickly as the bottle of “Jack Powers” at the end of issue 128.

I’d have expected that more time would have been given over to establishing Tony’s drinking as problematic.  Yes, we do see him knocking them back pretty regularly, but in the context of the times, it’s not portrayed as particularly unusual, and for the most part, Tony is able to fight as Iron Man without any real impairment.  When Iron Man goes too far, and kills the Carnelian ambassador, it has nothing to do with his alcoholism, and everything to do with Justin Hammer’s poorly explained ability to take control of Tony’s armor from the other side of the world.

Much of the drama of Tony’s drinking hinges on how he treated Edwin Jarvis, but that feels incredibly forced to me.  Jarvis and Tony have known each other for years, yet it only takes Tony snapping at him once to get him to turn in his resignation?  That really doesn’t make a lot of sense to me, nor does it make sense that Jarvis is so central to his speedy redemption at the end of the book.

Bethany Cabe, and her recognition of Tony’s problem, and her ability to connect it to her earlier relationship, forms the core of these issues.  What’s interesting to me is that when Tony is courting Bethany, she doesn’t seem to be bothered by him getting sloshed in Atlantic City. I also like the fact that Bethany has rivalry with Mrs. Arbogast, Tony’ secretary, and with Iron Man, not knowing that he is actually Tony.  That is the kind of old-school Marvel character situation I always enjoy, and I generally like how Bethany was portrayed here.

I would have thought that Rhodey would be a lot more distinct than the helpful sidekick he’s portrayed as here, but I guess that all comes later.  I don’t buy Tony and Rhodey’s friendship here though; it seems more like a mutually admiring employer/employee relationship.

Anyway, I recognize that I’m passing judgment on a book from 1979 from a 21st century perspective.  No other book at this time showed alcoholism with this level of subtlety and realism, even if it’s not terribly subtle or realistic.  I wonder if the easy way in which this got wrapped up is what prompted Dennis O’Neil to revisit Tony’s drinking later on, and to eventually replace him as Iron Man with Rhodey (you know, the story that I originally thought was in this trade).

The David Michelinie/Bob Layton writing team is pretty effective, and this book generally serves as a strong example of how good Marvel comics were in that era.  Sure, there’s some silliness around, but each issue (with the possible exception of the origin recap issue) was exciting and fun to read. John Romita Jr.’s artwork is unrecognizable as his, compared to even his earliest issues on Uncanny X-Men.  I’m not sure how much of that is because JRJR hadn’t found his style yet, or if it’s because Layton’s inks smoothed out any idiosyncrasies in his art. This is prime Marvel house style, and there’s nothing wrong with that.

It’s interesting that Tony is in no way the wise cracking character we’ve seen since his movie success.  I do really want to dive into my Iron Man run (starting with O’Neil’s earliest issues, through the period just before Tony got turned into a teenager in the 90s), but I’m going to have to do some serious moving of boxes before that can happen.  I’m a lot more tempted now than I was before reading this book, so maybe you’ll see that soon.