When I first saw Glengarry Glen Ross in a theater, it felt like a fictional world where a bunch of sad sack salesmen are stuck in a room trying to hustle a worthless land deal. Alec Baldwin stole the show as the company rep reminding everyone of the wonderful prizes that awaited the top two salesman while the rest get tied for third place. A few years ago I took a job with a cable company that was supposed to be just about customer service. If your cable went out or you forgot to pay your bill, I was the person that answered the phone when you called the hotline. It seemed like a dream job since I’d been fixing my parents’ cable box over the phone for decades. But then they introduced the element of “Service 2 Sales.” They made it sound like we were merely making sure we offered the customer a chance to get a deal on HBO or “finish the bundle” by getting them to sign up for our digital phone package. But very quickly it turned into quotas and the simple fact that if you didn’t sell that phone, you got sent home. As the end of the month approached, my co-workers would be doing ever trick they could figure to get their sales up so they wouldn’t get fired from a $9 an hour job. All I kept thinking was those guys in Glengarry Glen Ross had it easy. They didn’t have to beg someone to get a digital phone while they’re calling up to complain that their cable and internet have been out all day. The movie is now coming to Shout! Select as part of Glengarry Glen Ross: Collector’s Edition. The movie captures the desperation of the stage play as even Jack Lemmon has to hustle for the good leads. The bonus features include an audio commentary with Jack Lemmon so it’s so worth getting. And you don’t even have to buy the digital phone. Here’s the press release from Shout! Factory: 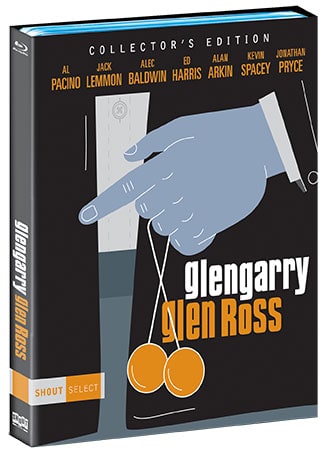 A Film by James Foley

Adapted from his Pulitzer Prize-winning play, GLENGARRY GLEN ROSS shows David Mamet at his searing, profane best. A group of Chicago real-estate salesmen-cum-con artists live on the edge. Life is good for the one on a roll. For the rest, life hangs in the balance. There is no room for losers. A-B-C: Always Be Closing, sell, or go under, is the salesman’s mantra. With the pressure on, so begins a rainy night of cutthroat business and shattered lives. On June 2, 2020, Shout! Select will release GLENGARRY GLEN ROSS Collector’s Edition Blu-ray. Directed by James Foley (House of Cards, At Full Range) and written by David Mamet (State and Main, Wag the Dog), the critically acclaimed movie GLENGARRY GLEN ROSS boasts an incredible winning cast. Delivering an Academy Award®-nominated performance*, Al Pacino (Scent of A Woman), plays the fast-talking Ricky Roma, alongside Jack Lemmon (Mister Roberts, Save The Tiger) giving a phenomenal performance as the veteran Shelley “The Machine” Levene, struggling to keep his neck above water. A star-studded ensemble cast includes Alec Baldwin (Mission: Impossible – Fallout, The Cooler), Ed Harris (Apollo 13, Pollock), Alan Arkin (Little Miss Sunshine, Argo), Kevin Spacey (House of Cards, The Usual Suspects), and Jonathan Pryce (The Two Popes, Game of Thrones).