When you talk about Marcel Marceau, it’s about his legendary status as a mime. For decades he put on white face, stayed silent and walked against the wind. But finally his time of fighting Nazis as part of the French Resistance in World War II being told as a movie. Jesse Eisenberg plays Marcel during a period when he couldn’t stay silent. The movie arrives in July on Blu-ray. Here’s the press release from Shout! Factory: 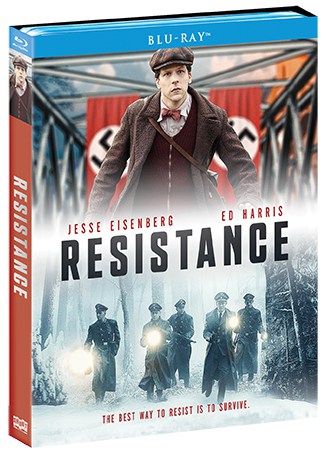 He Saved Their Lives in Silence

Before he was the world-famous mime Marcel Marceau, he was Marcel Mangel, an aspiring Jewish actor who joined the French Resistance to save the lives of thousands of children orphaned at the hands of the Nazis. Starring Jesse Eisenberg (The Social Network, Zombieland), Ed Harris (Top Gun: Maverick), and Édgar Ramírez (Zero Dark Thirty), Resistance is a compelling drama about a group of unsung heroes who put themselves in harm’s way to rise above hatred and oppression during World War II. Inspired by a true story, the film makes its Blu-ray debut July 21, 2020 from Shout! Factory in conjunction with IFC Films, and is available for pre-order now by visiting ShoutFactroy.com

As a young man growing up in Nazi-occupied Europe, Marcel has no intention of getting involved in the war – his pursuits include impersonating Charlie Chaplin in burlesque clubs, painting backdrops for his plays, and antagonizing his obstinate father. His life is thrown into upheaval when he is recruited into the French Resistance, putting his acting skills to the ultimate test in teaching orphaned Jewish children how to survive in the horrifying reality of the Holocaust. Based on the inspiring true story, Resistance follows the revolutionary tale of a selfless act that would forever change countless lives.