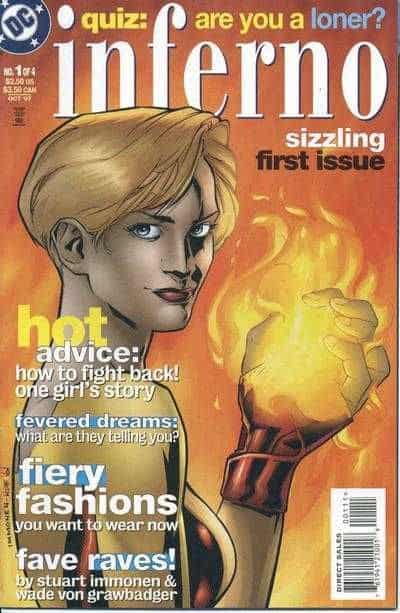 Spoilers (from twenty-two to twenty-three years ago)

Inferno is a character from the 90s post-Zero Hour reboot Legion of Super-Heroes and Legionnaires titles.  Prior to the reboot, Inferno was the name given to the SW6 version of Sun Boy, Dirk Morgna, but for whatever reason, the powers that be decided to give that name to a young woman who was not a Legionnaire, but a member of Leland McCauley’s Work Force, a corporate team.  Inferno was always portrayed as prickly and full of attitude in her earlier appearances.

When the Work Force helped fight off the Emerald Eye of Ekron, when it had possessed Shrinking Violet, Inferno was among a group of Legionnaires that got transported to, and stuck in, the 20th century.  She stayed with the Legion for a while, and got a new costume (thankfully, because her original one was terrible), and then rather abruptly decided to take off on her own.

It felt forced, and when she got her own four issue miniseries, it was a big surprise.  But then, it was the 90s, crazy things kept happening in comics, and if Stuart Immonen wants his own book, I guess you give it to him.

I remember buying this book, and I remember the way each cover was designed as an homage to fashion and womens’ magazines, but I don’t actually remember the story or content at all.  I’m curious to see if any of it will come back to me. 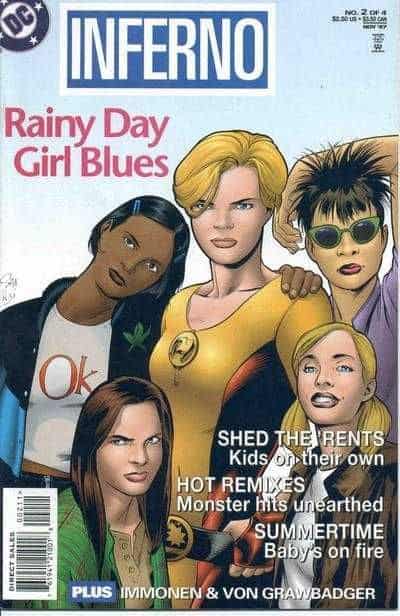 There were a lot of strange and regrettable decisions made during the 1990s in the world of mainstream comics, but I think that deciding to launch a series of Legion of Super-Heroes adjacent miniseries with a mini about a very minor character set in a mall is among the strangest, if not most visible.

Inferno, the character that has mostly just shown an occasional tendency for throwing temper tantrums or being cruel, decides she wants to live in the 20th century she hates, and so hooks up with some mallrat girls, and happens to get into a conflict with an energy vampire who just happens to live in the same mall, but is helped by the talking panda who curates her memories.  For four whole issues.

I don’t want to be negative, but this is not a good comic.  Let’s try to focus on the positive aspects first.  Stuart Immonen is a great penciller, and this book looks terrific.  I assume he designed Inferno’s new look (her old, skirted costume was terrible), which makes her look a bit like a competitive bicycler, but also works as a decent superhero outfit that suggests the Legion’s general aesthetic.  Immonen’s character work is great, with some of the girls Inferno becomes friends with standing out as individuals.  Also, I love that most of the scenes of the mall make it look like Toronto’s Eaton Centre, because it gives it a sense of familiarity, and does actually explain the ridiculous amount of big air vents that are used as story elements over and over again.

I also love the covers to this series, each of which is designed to look like the women’s and fashion magazines of the late 90s.  It’s a cool conceit, and while they give very little clue as to the contents of the comic, they help prepare the reader for the setting. 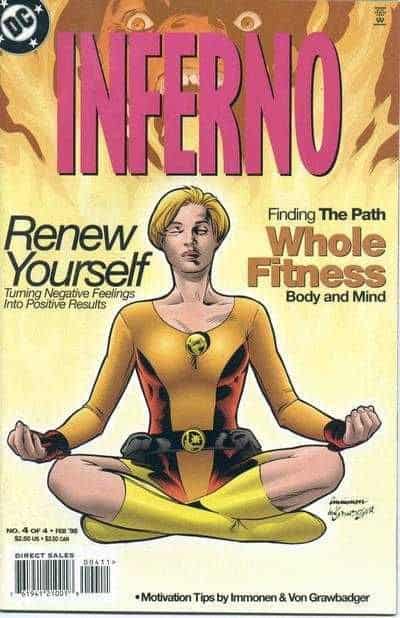 That’s about all the praise I have though.  Inferno was a cipher of a character before this series began, and after she’s dug into her memories and motivations a little, she’s still not particularly interesting.  I came away from this book liking her less than I did when she was background in the LSH title.  The fact that she has a panda named Eldrid Hayes living in her head never got enough of an explanation, and I just never could bring myself to much care about her or the girls she was hanging out with.

Stuart Immonen has long been an awkward fit in mainstream comics.  He has a lot of indie sensibilities, especially in his writing, and this felt like a character study that might have better worked without fire powers, vampires, and panda bears, and had really just been about a lost girl meeting other lost girls in a mall.  The superhero stuff is what doesn’t work here.

I also found it odd that Inferno chose not to return to the 30th century with the others, based on the fact that a few girls her age can barely hide their contempt for her.  I don’t know if Immonen had plans or desires to place her into any other titles (I see that she made sporadic appearances around the DCU for a few years, like a two-part guest shot in Wonder Woman) that never came to fruition.  It’s interesting that he, according to the text piece in #4, campaigned to keep her from being killed off in Final Night.

From here, DC made a couple of other Legion-related miniseries, with the next one I’ll write about, Legends of the Legion, making the most sense of them all.

You may be shocked to learn that this series was never collected.