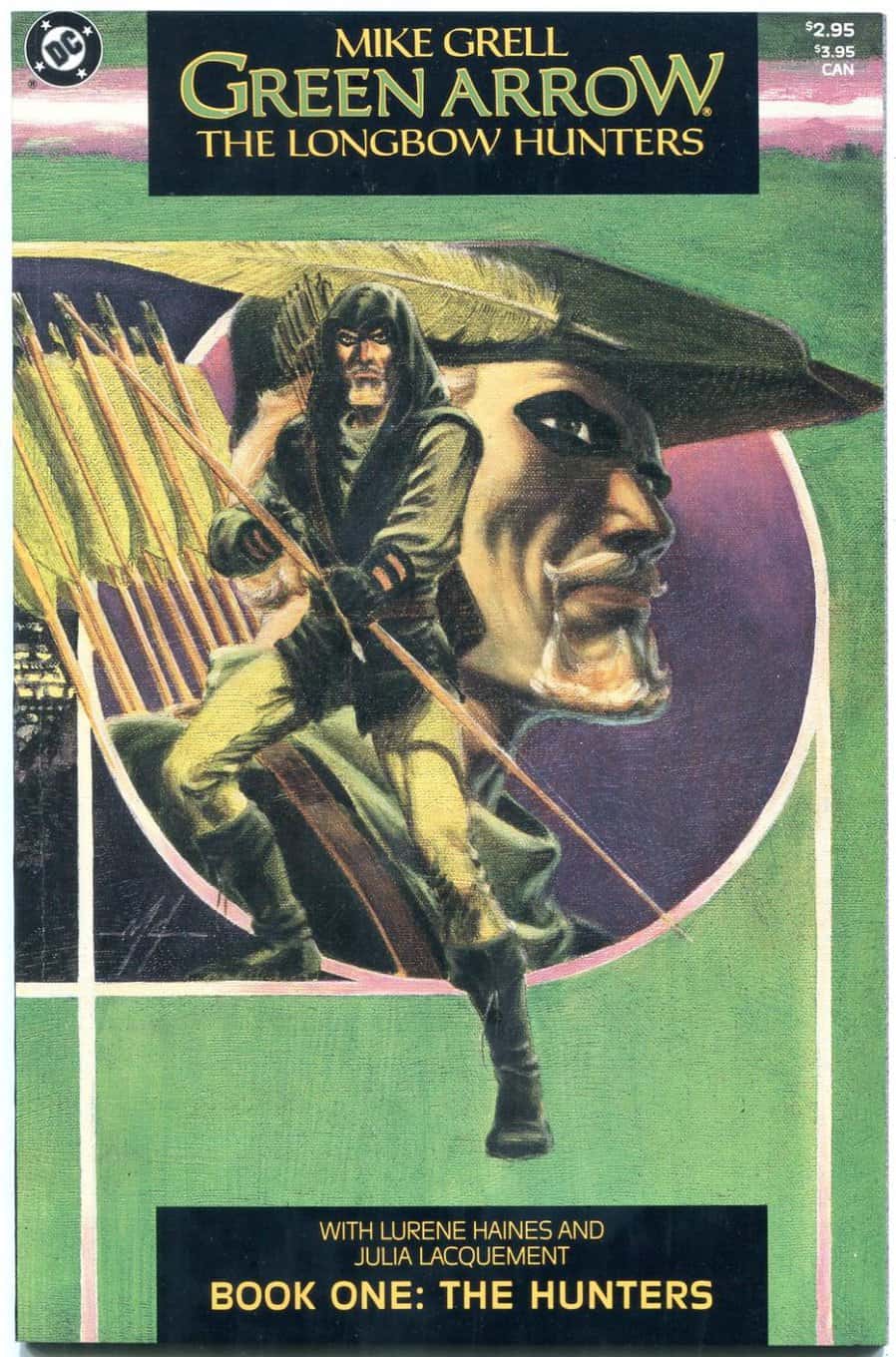 Spoilers (from thirty-three years ago)

After the wild success of Frank Miller’s The Dark Knight Returns, there was a quick flurry of activity at DC that was focused on updating central characters, making them more mature and reflective of the post-Miller, post-Watchmen assertion that comics were not just for kids anymore.  It was an exciting time to be discovering comics, although my participation stayed inconsistent and spotty.

To that end, I never bought Mike Grell’s three-part Green Arrow: The Longbow Hunters.  $4 Canadian was a lot for a single comic in those days, and I’d never read a Green Arrow comic at that point (aside from appearances in Justice League of America or, in his Earth-2 version, All-Star Squadron).  I did like the hooded look that Grell gave Ollie, but something about the book never appealed to me.

Until the moment that I sat down to start this column, I’d always assumed that this comic was “suggested for mature readers”, like Dark Knight.  I do remember my twelve-year-old self glancing at the almost-nude scenes a few times, and I guess from there I decided that I wasn’t supposed to be reading it (not that that alone would have stopped me).

I also never read Grell’s ongoing Green Arrow series that launched after this, aside from the occasional crossover issue.  I have no idea what this book is about, but I’m curious to see what it’s like after all this time.  Join me…

I really enjoyed this book.  Grell took a character that had not been well used in a long time (aside from the Denny O’Neil Green Lantern/Green Arrow days, perhaps ever), and showed that he could be a serious protagonist, consistent with the more mature and thoughtful approach that DC was taking with some of their characters.  He introduced a lasting character to the DC Universe in Shado (even if she never was named here as such), and rescued Black Canary from the comedic role she was playing in Giffen and DeMatteis’s Justice League, while also putting the character through the ringer (I’ll come back to that).

I like that Ollie felt like he could just set up shop in Seattle, but seemed to be half-assing it as far as superheroes go until the story got into motion.  His casualness with the police is also an interesting aspect of his character, as is the way Grell downplayed the survival aspects of his origin.  Instead, we see Ollie as this guy who just wanted to shoot some arrows, and is only now, as he moves towards his mid-40s, starting to figure out what his role should be.

Shado is, of course, the most interesting character in this story, and Grell draws her beautifully.  I like that her name isn’t used, and that her story emerges slowly through flashbacks that are interspersed in the middle of other scenes.  It’s a very effective storytelling technique.

At the same time, I found that Grell’s use of double-page spreads often detracted from the readability of the comic, largely because of the deep gutter of prestige format books.  There were more than a few times when I read the bottom half of the left page before realizing how the layout was supposed to work.

I was surprised that this book didn’t have a “mature readers” label on it, as it featured prostitution and sexual violence in the first issue.  I also find it impossible to read the second without surmising that Dinah was raped by the man who held her captive, as well as tortured by him.  The images in this section are disturbing, and definitely worthy of a warning.

A different kind of maturity was shown in Ollie and Dinah’s relationship.  I liked the scene where they discussed starting a family, as it showed them speaking to one another as equals (even if I think it’s weird that she wore her blonde wig to bed).  Dinah is shown as a very independent woman.  I did wonder at the fact that she never used her screaming abilities, or why she seemed to have recovered from her trauma relatively easily by the end of the series, unless this got picked up on in the ongoing series that launched a little later.

Grell used this title to build on Ollie’s stance as a champion of peoples’ rights, as Denny O’Neil showed best in his run.  Ollie seems genuinely interested in stopping the murder of sex workers at a time when it seems the police didn’t much care.  Likewise, the main plot of the book ended up mirroring events happening in the Iran-Contra scandal, and suggested government complicity in the drug trade.  Would that have been controversial in 1987?  I was too young to have been aware of how a lot of the political stuff in this book would have played out at the time.

I also think it’s very interesting that Grell showed Ollie as willing to kill.  Sure, he could easily justify the killing of the man who tortured Dinah, but what about the guys in the helicopter?  Ollie doesn’t seem very morally concerned with these guys, which rings a little false, unless it got picked up afterwards.  Likewise, it’s curious that he decided to keep the money he got from the CIA guy, instead of giving it to charity (was Ollie the scion of Queen Industries in the post-Crisis DCU?  It’s so hard to keep track of stuff like that).

I also loved Grell’s redesign of Ollie’s costume, putting him in a darker green, and adding the hood to his look, instead of his usual pointy hat.  I don’t know how Ollie expected to keep a secret identity for long with that beard and moustache, but the general look of him, especially at night, is a perfect example of how to update a character.

From here, DC launched an ongoing series, with Grell as writer, that now I feel like I should have checked out.  When conventions come back, I might start looking for a reasonably priced full set, as I’d like to learn more about how Grell originally envisioned Shado, and how Ollie and Dinah worked through this whole situation.

If you’d like to read this, check out this link: Green Arrow: The Longbow Hunters