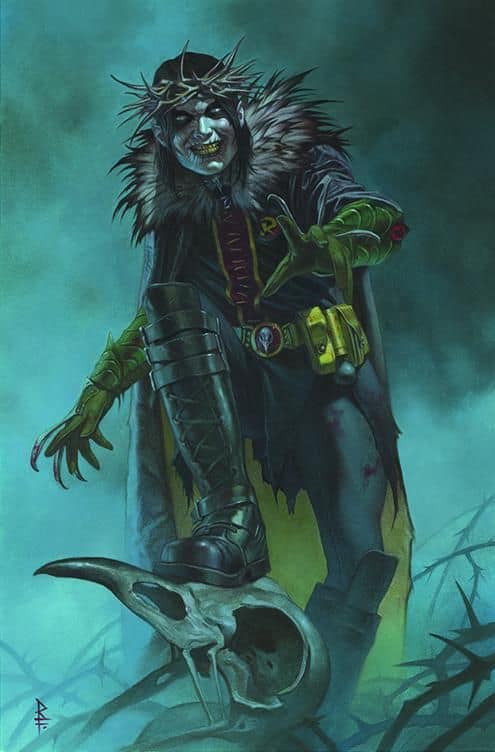 In [Dark Nights: Death Metal #3], you meet the Robin King. He’s kind of born in #2, but in #3 you get to see him interact for the first time with the heroes. I love him because I’m just writing his dialogue now – his whole history, his secrets, you’ll learn who he is, what he is. I’ve seen a lot of speculation.

I love him cause he’s really cheery, and he pops out and the JSA sees him, Flash and Dr. Fate, they’re like ‘Who are you supposed to be, kid? And that belt is a choice!’ and he’s like ‘Thank you so much! Good morning! I actually worked hard on this belt and it contains all of your friends! You Barry, on my world I dug up your mom’s body and I stuffed her into one of your goddamn Flash rings! You wanna see?’

Then he turns to Alan Scott, the Green Lantern, and he’s like ‘On my world, I hunted down your children and I cremated them and made this composite from their ashes into this composite which I powered with a Black Lantern ring, so it cancels out your powers and I can beat you to death with it.’

He’s just like this ten-year-old kid but he’s very evil.

He’s definitely one of our darkest creations, but I love him cause what I want the heroes to go up against something that says ‘Everything you believe people to be, everything you hope we are, we aren’t,’ and I want to show representations of that with the Batman Who Laughs and the Robin King.

The more evil and darker the villain, the more the heroes are challenged by what they see in human nature, and it becomes harder and harder to be hopeful. He’s not evil just to make him dark and fun and twisted – he is those things – but he’s meant to be something that you read it and it hits you and it pulls you in. Cause he says ‘All your hope, all your aspirations for us and for you are nothing, and I’ll show you why.’ He’s a very spooky kid.

Video panel is here and GR transcript above from GR.

Snyder has also teased some big returns in Dark Nights: Death Metal with some coming to pass and some yet to come.

And also, Lobo is another one that we really were trying to bring back and give some real legs to again, and it’s the classic iteration, but in a new way. And yeah, there are some surprises, Superboy-Prime and a bunch of other characters are coming back in ways that kind of reframe them. They’re still the originals.