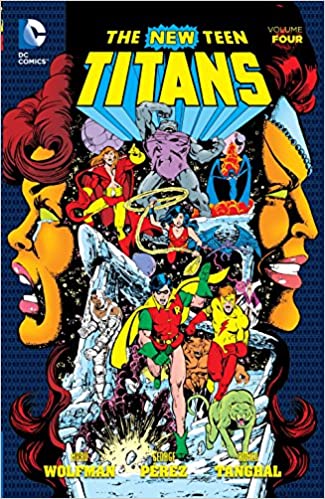 Spoilers from thirty-seven to thirty-eight years ago

It’s time to dig into another Titans trade, this one covering the series’s third-year anniversary.  These comics have been growing on me, as Marv Wolfman and George Pérez have hit their stride, and fallen into the kind of easy collaboration that makes for legendary runs.  I notice that Pérez started getting co-plotter credits during the Tales Of miniseries, and that that continues into this book.

So, let’s see how things continue to improve…

I found this trade to be another mixed bag.  The story about Brother Blood was kind of silly, but balanced character and plot nicely.  The issues concerning Starfire’s sister and the fight against The Citadel didn’t really do it for me, but the attempt at addressing social issues in the runaway storyline really fell flat.

I know that I have to remember to read these books in the context of a Comics Code Authority that didn’t like depictions of drug use or other questionable things.  In that sense, the hints about teen prostitution and drug use might have been progressive at the time, but the way that world is portrayed is about as fantastical as that of The Citadel.  I didn’t understand the role that Roy Harper played, or why Adrian Chase needed the Titans to help him, aside from pulling information from an upset teenager (which, let’s face it, police are pretty good at doing on their own).  Vic’s ability to relate to all the runaways is a bit questionable, when his recent origin issue (in the last volume) shows his flirtations with the runaway life as being brief.

The Citadel storyline irritated me for a few reasons, the biggest of which is that Lord Damyn, the ruler of multiple planets, is portrayed as an absolute idiot.  I know that we currently are in a situation where the leader of the most powerful country on the planet is only slightly more eloquent than Damyn, but still, he’s not shown as being surrounded by intelligent beings (one lone traitorous Psion is not enough).  Where this story really lost me is in the stuff surrounding Auron and X’Hal, and the idea that the god of that system is unable to control her rage.  It threw me out of the rest of the story.  A big part of that storyline seemed to be given over to amplifying up the Omega Men, whose own series started soon after, but there was nothing happening there that gave me any interest in reading more of their adventures.  They seemed boring, and not all that unique as characters (I have only ever liked them in Tom King’s excellent run a couple of years ago).

The Brother Blood stuff also stretched credibility in a few ways.  I remember that people were a little obsessed with cults back in the 80s, so it’s cool that Wolfman and Pérez wanted to construct one in the DCU.  I think their mistake was in stating that Blood was 700 years old, but only just beginning to expand his religion into the United States.  His power set is never really explained, nor are his goals.  Why is he running this cult?  Is it just to access young American women, or is it about riches?  These things are probably not as important to a 700 year old, who already appears to have massive resources.

I do like the way that Wolfman introduced Adrian Chase to the Titans’ world, and portrayed him as increasingly fed up with the justice system.  I know that Chase will go on to become the Vigilante, a character whose appearance I’ve always enjoyed (despite having never read an issue of his series – I’m thinking I should rectify that).

One thing that stood out to me in this comic is how many scenes show people casually smoking, even in offices and the Runaway Center.  It’s remarkable how that has become so inappropriate and noteworthy in my lifetime, and has me wondering what the first North American comic to depict people casually wearing facemasks will be.

In terms of character development, there isn’t a whole lot in this trade.  I feel like the rationale for why Kory can’t stay home doesn’t really hold up, but I guess that helping her find some closure with her family is what allows her to get more involved with Dick, and I know that relationship lasts a long time.  I found the issue where Wally talks about his faith to be interesting, especially given his anti-Russian views from before.  I get the impression that were these stories being written today, Wally might be a Proud Boy or something.  The hints that Raven is getting ready to have another confrontation with Trigon bores me. Aside from that, most of these characters are in a holding pattern for this volume.

Anyway, the next trade starts with Terra’s story (which was briefly previewed here), and that has me excited.  I know the bare bones outline of what happens with Terra, but am looking forward to seeing how it plays out.

4 Marvel Trailers You Need to Watch