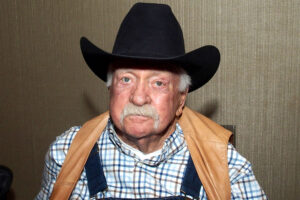 Wilford Brimley, Cocoon Star and Face of Quaker Oats Commercials, Dies at 85: ‘One of a Kind’

Wilford Brimley, the film and television actor known for his roles in Cocoon and The Natural, has died. He was 85.
Brimley’s manager Lynda Bensky told CNN and NBC News that he died on Saturday while hospitalized in St. George, Utah. He had been in the ICU receiving treatment for medical problems and was on dialysis.

“Wilford Brimley was a man you could trust. He said what he meant and he meant what he said,” Bensky said. “He had a tough exterior and a tender heart. I’m sad that I will no longer get to hear my friend’s wonderful stories. He was one of a kind.”

Brimley got his start in 1969 with a role in John Wayne’s True Grit and went on to appear in the hit television series The Waltons, as well as Our House. Some of the character actor’s other film credits include The Thing, Hard Target, and The Firm.

Brimley also notably appeared in the Quaker Oats commercials throughout the 1980s and 1990s, where he often said the oatmeal brand’s famous slogan: “It’s the right thing to do and the tasty way to do it.”

Diagnosed with diabetes in 1979, Brimley cautioned viewers to check their blood sugars in many Liberty Medical commercials over the years, which he was honored for in 2008 by the American Diabetes Association.

In the wake of the actor’s death, a number of celebrities paid tribute to the Brimley.

“RIP Wilford Brimley What an absolute legend,” wrote Seth Green, who appeared in 1984’s Hotel New Hampshire with the late actor. “I was lucky enough to make my first movie with him. I was only 8, but he treated me like a peer, and gave me confidence as an actor. Forever grateful for his kindness & generosity.”

“Plus he was funny,” Green added alongside a screenshot of a Tweet where Brimley mulled over a few names he could have used in a fictional wrestling career, including “Under Quaker” and “The DIE-A-BEASTUS.”

Meghan McCain also went on to share a tribute, noting that Brimley had been “a very early and passionate supporter” of her late father, Sen. John McCain.

“I had the privilege of spending time with him on the trail, including a special bus tour with veterans. Sending love, prayers and gratitude for our experiences with him,” she wrote.

Brimley is survived by his wife, Beverly Berry, and his four sons — James Charles, John Michael, William Carmen, and Lawrence Dean — from his first marriage to Lynne Bagley.

On behalf of the IP team, I offer our condolences to the family, friends and fans of Wilford Brimley.