The Batman Who Laughs Defeats The Justice League Easily?

An Unexpected Villain Emerges With A New Book Of Destiny?!

This book explains who the world was lost and…

…how the Batman Who Laughs became the all-powerful rule of Earth and collapsed the multiverse from his new perch.

Third, fourth and fifth saw the Teen Titans / Titans defeated, then the Suicide Squad live up to their name, then Gotham City heroes falling to a living city with the mind of a Dark Multiverse Batman.

The Justice League decided to split up to deal with the threat of the Dark Multiverse Batmen which is exactly what the Batman Who Laughs wanted and led to their defeat.

Sixth, Seventh and eighth saw Martian Manhunter, Green Lantern and Hawkgirl defeated by an army of Batmen assembled to take them down.

Ninth saw the core Batman defeated, his Gotham City consumed, but he was saved by the Flash. 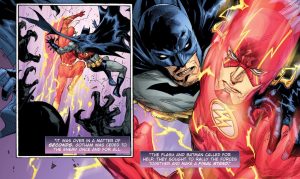 Tenth saw Superman defeated and used to harness the power of the sun and fuel Apokolips.

Eleventh and Twelfth saw Aquaman and Wonder Woman surrender their kingdoms to spare their people in the shadow of Superman’s defeat.

That allowed the Batman Who Laughs to take over Earth in one week and reshape reality and Earth as he saw fit.

People that side with evil during DC’s Year of the Villain were transformed into monsters while those that did not were affixed to the Crisis tuning fork used to amplify Perpetua’s powers as she destroys multiverse after multiverse. The heroes and villains of DC were confined in different spots as seen in the main Dark Nights: Death Metal series.

The book ends with the revelation that a scarred Lex Luthor appears to be a the savior to come writing in a new Book of Destiny, that seems to be the imagery DC is invoking with how he’s presented in this issue, as…

…the Legion of Doom may well be the team to save multiverse not the Justice League?!

Some of the more convoluted parts of the core Dark Nights: Death Metal series are explained as well as what happened after writer Scott Snyder’s last issue on Justice League. An intriguing story, still a little bit convoluted at points with choppy art, but a generally entertaining read. 7 out of 10.