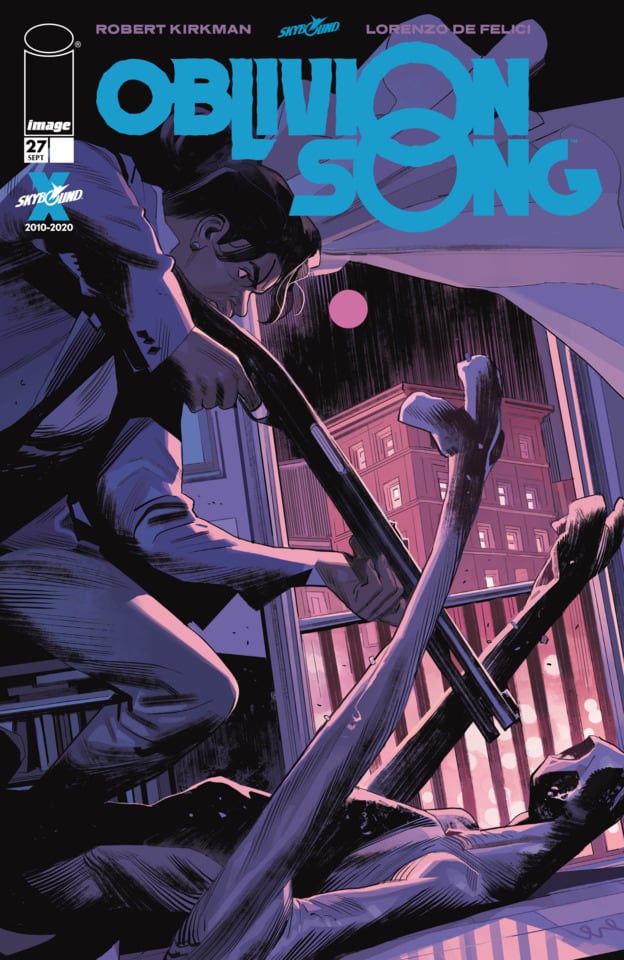 Oblivion Song #27 – We finally get to see what’s been going on back on Earth, as we learn that Heather has been spending the last three years trying to prepare the US military for possible war with the Kuthaal.  We also learn just how she’s become so knowledgeable about these strange aliens.  At the same time, Nathan returns to Earth with a dire warning.  This series stays exciting and new, as Robert Kirkman stays as unpredictable as always.  It is a very good read.

Empyre: Avengers Aftermath #1 – This really does wrap up a lot of dangling plotlines from the Empyre event, as we get a look at how Hulkling begins his rule of the combined Kree/Skrull Empire, and get to attend his second wedding.  Most interesting is the part about Abigail Brand (a character I’ve liked since she debuted) moving on from Alpha Flight, which appears to have something to do with an upcoming event.  Al Ewing lays ground for a few things that I’m interested in; if he were to take over the Avengers title, I’d definitely buy it.  In the final analysis, Empyre was a little underwhelming, but it had some good moments.  I’m glad I picked it up.

Marauders #12 – Kate Pryde is back (if a little hard to recognize as such the way Matteo Lolli draws her), and while most of the extended X-family wants to celebrate, she’s ready to plot revenge and get back to work.  This series remains odd – Gerry Duggan’s plotting and pacing are interesting but always feel a little off-kilter.  Not much happens in this issue, but I presume that’s because the upcoming X of Swords arc needs to be micromanaged.

Wonder Woman: Dead Earth #4 – This came out a while ago, but only now turned up at the store where I shop (a hiccup of DC’s new distribution plans?).  I loved the first issues of Daniel Warren Johnson’s view of Wonder Woman’s possible future, but like with all future stories, the more it started to depend on current characters, the less interested I got.  Johnson’s art in this series is incredible, and he does bring the story to a very well-written resolution.  This is the first of the Black Label books that I’ve read, and I enjoyed the format and production values.  I hope to see more mainstream work from Johnson, but I’d also be very happy to see him working on another independent book like Extremity.

X-Factor #3 – I guess the secret to making a comic set on the Mojoworld bearable is to effectively keep Mojo out of it.  We discover which mutant died in this most annoying of dimensions, and see an old friend.  This is the oddest of the X-books right now, and it is working for me, although I can’t bear much more Mojoverse nonsense.

X-Force #12 – Beast makes some very strange decisions about how to police Krakoa as he investigates Mikahil Rasputin’s ties to mutants on the island.  At the same time, Rasputin makes a move within the Xeno organization.  I think I’m starting to lose the plot in this series; I hope Ben Percy starts clarifying things as we move out of the X of Swords event.

Idris Ackamoor & The Pyramids – Shaman! – I am aware of the work that Idris Ackamoor and the Pyramids did in the 1970s, but have never really loved it.  That changed with his release An Angel Fell in 2018, which this album has built upon.  Ackamoor, as bandleader, explores the optimism of spiritual jazz, crafting an uplifting album well versed in the black liberation movement.  Only a few tracks have vocals, but his intent comes through very clearly.  It’s notable that this album is produced by Malcom Catto, of the Heliocentrics.

Blu & Exile – Miles – Below the Heavens, the first collaboration between Blu and Exile is one of those albums that ends up on a lot of ‘best ever’ lists of underground rap.  I remember it stayed in my car for close to a year, and got a lot of play.  This newest collabo recaptures the feel of that first album, with Blu floating all over Exile’s classic-sounding beats, but also builds on it, as both artists push themselves into trying some new things.  This is a double-disc album, and doesn’t feel bloated at all.

Ondara – Folk N’ Roll Vol. 1: Tales of Isolation – This is a collection of songs by folk singer JS Ondara that were written and recorded during the early days of the lockdown.  The songs are playful, poignant, a little sad and unsure, and serve as a great document of that frightening and uncertain time.  Ondara’s voice often reminds me of Tracy Chapman, and I like the sparse arrangements and insights he brings to the table.  This is not my usual type of thing at all, but I love it.