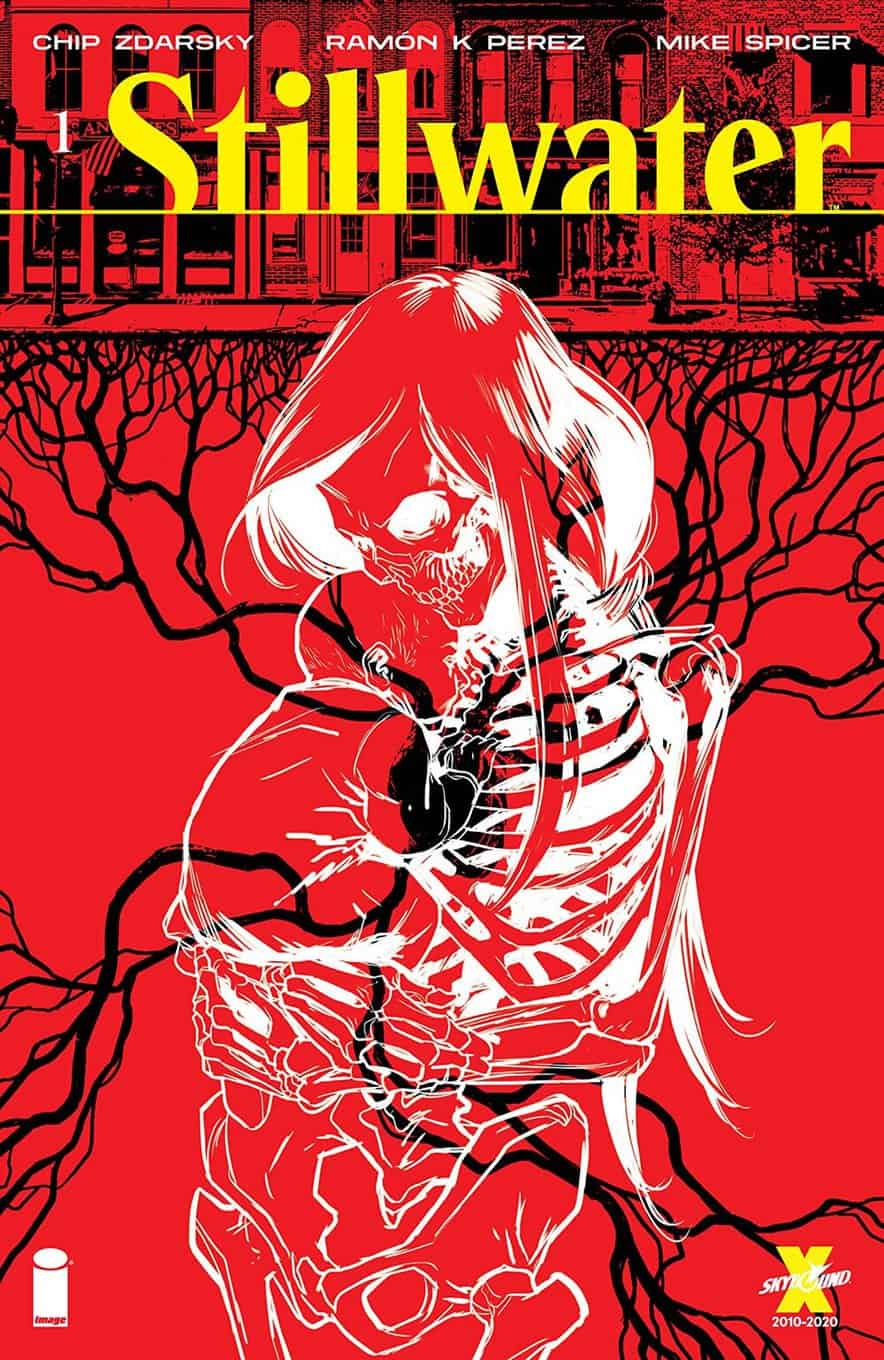 Stillwater #1 – I love coming into a book like this with no foreknowledge of what it’s going to be about.  I saw that Chip Zdarsky was writing, and that Ramón Perez was drawing, and just added it to my pullfile, knowing I’d be happy with it.  And I am happy.  This book starts by introducing us to Daniel, an aggressive and unhappy man who gets fired from his job at a magazine for not being able to handle his temper.  After a night of drinking, and at his lowest, he is given a mysterious letter summoning him to the town of Stillwater to collect an inheritance from an aunt he’s never heard of.  He and his friend head into the country, but as they get closer to their destination, it becomes more and more obvious that something is strange here.  And then they get to the town, and things get even weirder.  I can tell that I’m already hooked on this story, as Zdarsky tosses in a few surprises.  Perez is a great artist, and he subtly makes things feel wrong and weird in all the best ways.  I recommend checking this one out. 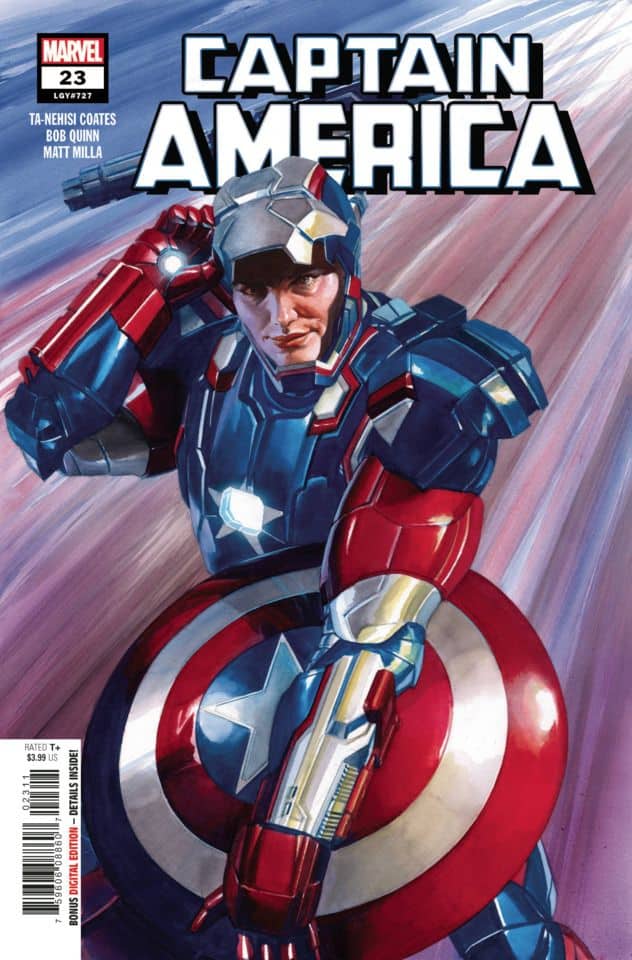 Captain America #23 – I haven’t been all that impressed with Ta-Nehisi Coates’s Cap run, as it’s taken a very long time to get anywhere, but this issue, which focuses on Sharon Carter, is one of the strongest yet.  Sharon, in the Iron Patriot armor, fights Selene while reflecting on how her age has guided her of late.  Sharon’s never received a whole lot of character development, I feel, so it was nice to see her get some more screen time here.

Giant-Size X-Men: Storm #1 – These Giant-Size one offs are strange, in that they very rarely do much to develop the title character.  In this one, Fantomas, Monet, Cypher, and Storm head into The World to try to rescue Storm from the techno-organic virus she  picked up in an earlier Giant-Size.  Russell Dauterman’s art is gorgeous here, and I do enjoy Jonathan Hickman’s writing, but I’m not all that clear on what the purpose of the Giant-Sizes that have been connected to this story are.  Or why Doug Ramsay is sort of the main character of them.  I don’t know if this is the last of this format, or if it will return as a pseudo-monthly after Sword of X ends.  Either way, I hope to see Dauterman drawing more X-books soon.

Hellions #4 – I’m enjoying this book, even if I do feel like Madelyne Pryor got taken out a little too easily.  I’m hoping that after Sword of X, we are going to get to know John Greycrow (fka Scalphunter) a little better, and that the focus won’t always be on Alex Summers.  This looked like such an unlikely team when it was first announced, but now I’m interested in seeing what Zeb Wells has planned for these characters, and I’m behind the general mission and purpose of this book.

Immortal Hulk #37 – The Leader’s plans start to fall into place, as he reveals himself to Doc Samson while also manipulating events that have the Hulk in the middle of a pitched battle with Gamma Force.  It feels like most of Al Ewing’s long-range plans for this series are coming together, making me wonder how much time is left in this storyline.  This series is constantly surprising me, and has one more revelation for us on the last page.  It’s great stuff.

Iron Man #1 – I’ve been in the mood for a solid Iron Man run for a while now.  I don’t think I’ve really liked any writer’s take on Tony since Matt Fraction’s run, which was probably a decade ago.  I’ve been liking Christopher Cantwell’s writing on Doctor Doom, and liked the more old-school approach being taken to Tony’s armor, so I figured it was worth adding this to my pullfile for at least the first arc.  This issue was a bit disjointed, as Tony decides to retire from Stark International, move to the Lower East Side of Manhattan, and give up high technology.  At a party he throws, he flirts with Hellcat, and together they find themselves in a fight with an old Iron Man villain.  Cafu’s art in this issue is great; he’s gone through a serious upgrade since I last saw him drawing books for Valiant.  I’m intrigued by this series, but expected to be more impressed by this issue.  I’m hoping the next one gives us more of a reason to be interested in Tony.

Once & Future #11 – An old woman fights Grendel (from Beowulf) in an old folks’ home.  I think had this series led like this, I would have been more fond of the first arc.  Now that I’ve gotten to know the characters, I find this series a lot more entertaining than I did at the beginning.  I’m glad I stuck with it.

Outcast #46 – Since this book began, we’ve been hearing about the Great Merge, when the beings that are possessing the good people of the mid-West will take over our planet.  Now it looks like that time is here, and the possessed seem to think that Kyle’s collection of outcasts will help the process, even if their presence causes pain.  This is a Robert Kirkman title, so I assume a couple of terrible things are going to happen in the last few issues.  They always do…

Star Wars #6 – Luke’s quest for a lightsaber comes to an end, as writer Charles Soule revisits some of the ideas and characters from his Darth Vader series of the other year.  I like this title, but like it best when it features more of the full ensemble, instead of just focusing on Luke.  Jesus Saiz continues to impress on this book.

Star Wars: Darth Vader #6 – Vader continues to try to learn just how Padmé Amidala both died and hid her child from him (he doesn’t know about Leia yet it seems).  I find it odd that he invites another attack from the Amidalans, the large paramilitary group dedicated to protecting Padmé’s memory.  I love the art that Raffaele Ienco is providing for this book.

Thor #7 – This is a great issue, with fantastic art provided by Aaron Kuder.  Thor invites Beta Ray Bill to Asgard to discuss Thanos and the vision he received, while Mijolnir turns up in Broxton, as does Iron Man.  Donny Cates has been basically telling one large story across all of his Marvel Universe titles, and now he’s linking Thor to his Guardians of the Galaxy run.  Most interesting is the fact that, while Thor finds it hard to lift his hammer, other people are finding it easier.  My complaint about the first six issues of this series was that they didn’t focus enough on Thor as an actual character – he was more just playing a role in the story.  It’s nice to see Cates shift the focus here, and gives me confidence that I’m going to like this book more going forward.

X-Men #12 – Amongst the many new ideas that Jonathan Hickman introduced to the world of the X-Men since he launched HoX and PoX, we have the world of Arakko, with its ties to Krakoa and Apocalypse.  We finally get some answers about that with this issue, which I think does a lot to set up the Sword of X event, even though there is no cover logo suggesting that.  The Summoner sits down with his grandfather, Apocalypse, to fill him in on everything that’s happened since he left a few thousand years ago.  Hickman is good at big sweeping histories, but I did find my eyes glazing over from time to time as I read this.  There’s a toyetic aspect to all the funky swords and new characters being shown for the first time, and it didn’t hold my interest the way that Hickman’s East of West did.  Still, I like seeing these other sides of Apocalypse’s character.

Nubya Garcia – Source – Nubya Garcia is a huge part of the London jazz scene, and on her debut full-length album, she shows why.  This album explores a few facets of the African diaspora, touching on cumbia and reggae-inflected jazz, and sounding uplifting and great.  I recommend checking out her Tiny Desk performance – Nubya is coming into her own!

Clarice Jensen – The Experience of Repetition as Death – It can be easy for drone music to be boring, but that’s not the case with this album.  I don’t know anything about Clarice Jensen and her work, but after hearing a snippet of this on All Songs Considered, I was intrigued.  Jensen constructs sonic landscapes that undergo subtle shifts and changes.  It’s relaxing and contemplative, and quite lovely.