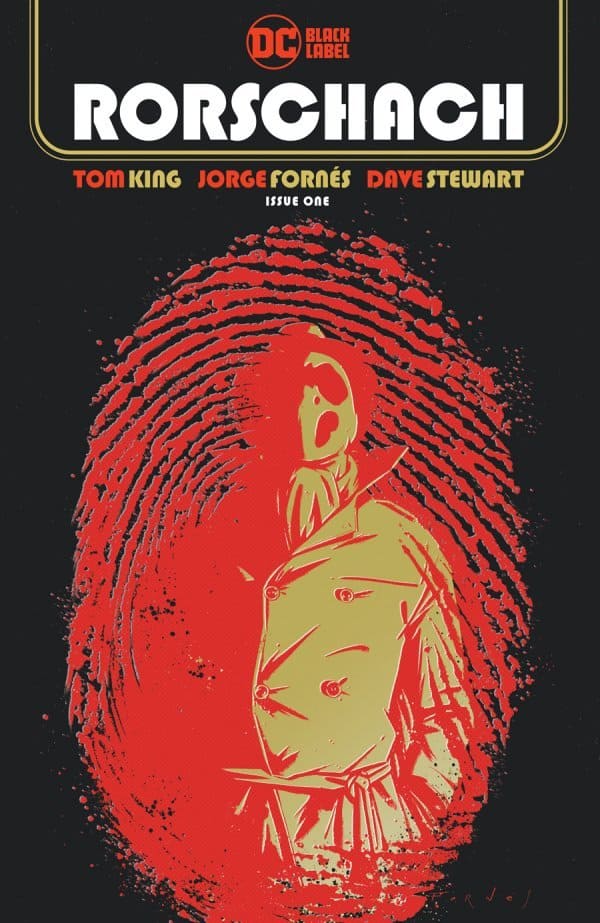 Rorschach #1 – As much as I’ve enjoyed the Watchmen comic (and liked the first season of the HBO series), I’ve never felt myself to be a fanatic for the book.  At the same time, I believe strongly that DC should have respected Alan Moore’s wishes and left the property alone.  Why, then, am I buying this book?  Tom King has proven himself with respect to his oddball projects at DC, and has created some fantastic series (although I’d say his Batman is not among them).  Jorge Fornés is a terrific artist whose issues of King’s Batman were the best of that run.  I couldn’t turn down a project like this, and figured that King would likely be respectful to the source material, and have something new to say.  I didn’t expect that this issue would begin with Rorschach getting killed while trying to assassinate a Presidential candidate (at least it looks that way), and so from the start, I’m curious about where this book is going.  The main character is a detective investigating the murder.  He is trying to figure out what went on in the catwalks above a political convention, who this guy in a Rorschach mask is, what his connection is to the young costumed woman the Secret Service also gunned down, and why the Service responded the way they did.  There is also a connection to the history of comics, with names like Otto Binder and Frank Miller turning up.  This is a very effective first issue, in that it’s got me intrigued and ready to read more.  Of course, one of the things that’s bothering me the most is the obvious lack of cellphone technology in 2020 (the detective uses a pager!).  I’m all in for this book. 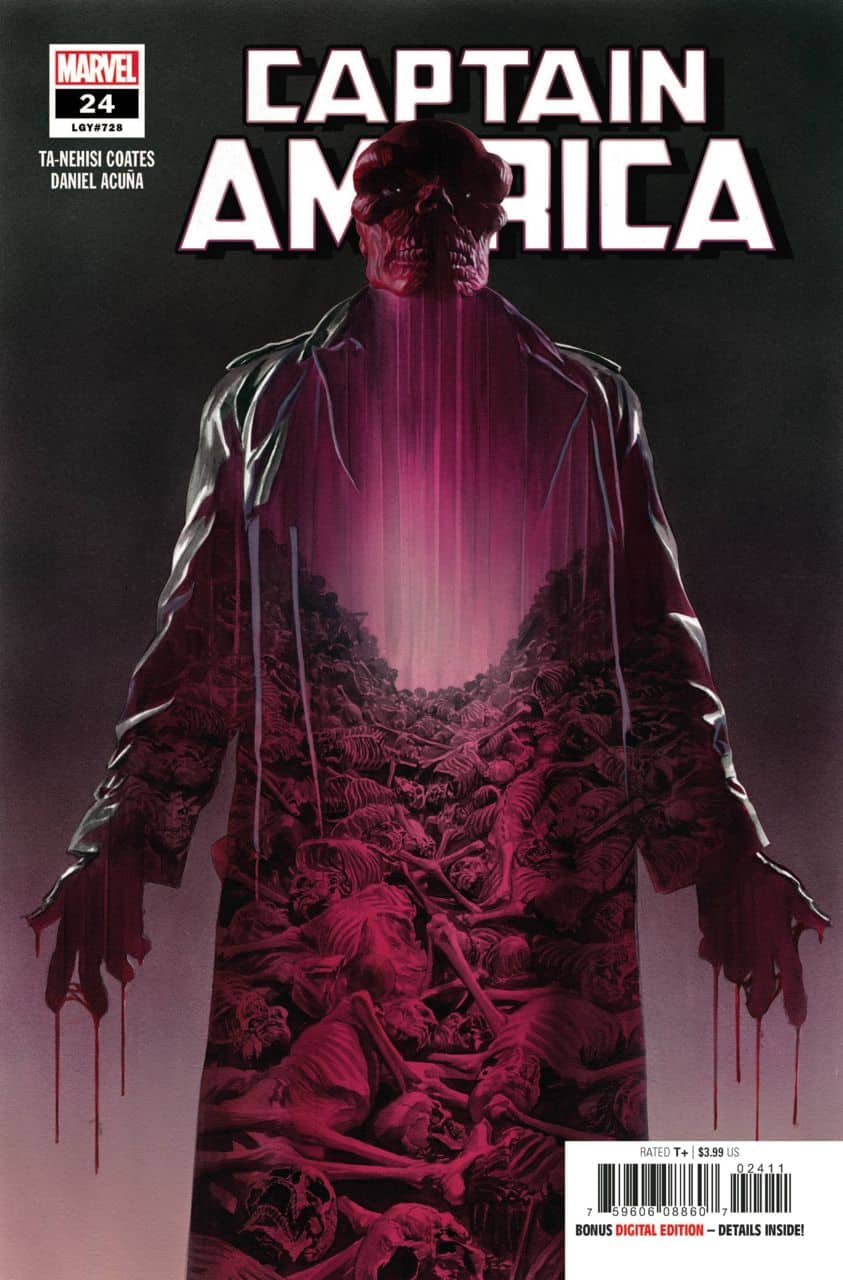 Captain America #24 – So Daniel Acuña joins Ta-Nehisi Coates for this issue, and that immediately reminded me of the fact that their excellent Black Panther run has never returned after the shutdown in the spring.  This series is fine, but I really miss Black Panther and would much rather be reading that book right now.  Lukin figures out what the Red Skull has been doing with his body while Steve and Sharon reacquaint themselves now that Sharon has gotten younger.  This series has been running pretty slowly, but it looks like the next issue will be pretty eventful.

The Devil’s Red Bride #1 – I thought I’d take a chance on this Vault comic by Sebastian Girner and John Bivens, despite not being familiar with them or their work.  It’s a historical comic set in 16th century Japan, and involves a young woman who wanted to be a samurai.  Her father and brother were samurai, although they were (presumably) wiped out by enemies.  Now, a few years have passed, and the woman is given the opportunity to help gain revenge on the people who defeated her family’s Lord.  It’s suggested that the sword she carries might be demonic in nature.  This is a good first issue, filled with atmosphere and good art.  Picking it up was a good decision. 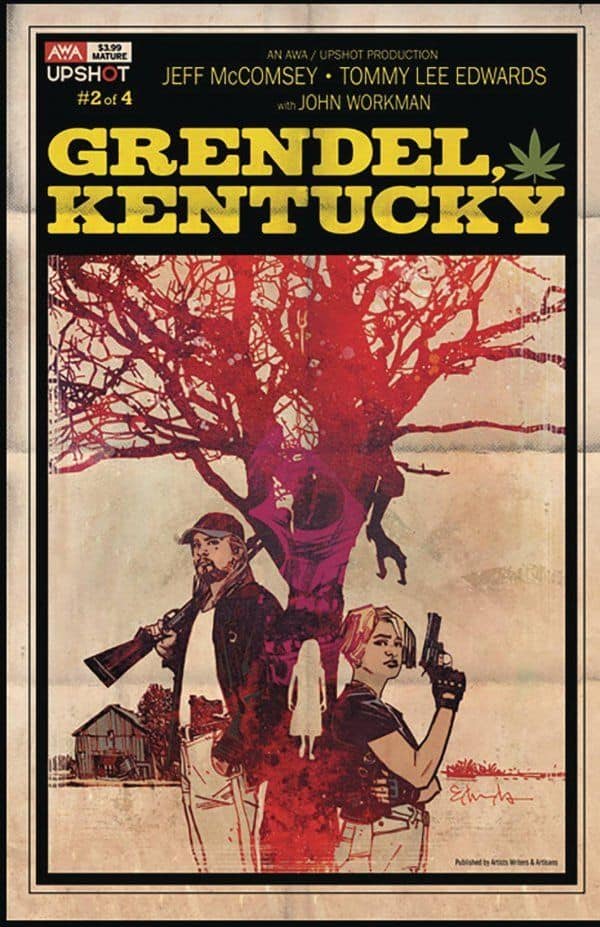 Grendel, Kentucky #2 – The Grendel myth gets a lot of work this week, as this 70s bike gang and hidden dragon series continues to draw readers in.  Tommy Lee Edwards’s art is great on this book, and I’m interested in learning more about how this town has been keeping a Grendel-type creature in a cave for years.  It’s a good book from AWA.

Hellions #5 (X of Swords Pt. 6) – This whole X of Swords event has been taking itself pretty seriously, but that ends with this chapter, as Sinister leads the Hellions into Avalon, with the plan to stop Arakko from getting the swords they need to compete in the coming tournament.  This is against Saturnyne’s rules, but Sinister doesn’t much care.  This issue is both amusing and irritating in equal measures, but I do like the way Zeb Wells is building this team, and how much this issue fits with the rest of the series, unlike some other X of Swords chapters I’ve read.  I think some people might be annoyed by how unessential this issue feels, but it might also lead some new readers to the book.  I do like the way Wells writes Empath and Greycrow.

Immortal Hulk #38 – The Leader’s plans stand revealed, but he is perhaps spreading himself too thin in his attempt to be in four places at once.  It really feels like Al Ewing is building towards a big climax soon in this series, and I can’t imagine what the Hulk will be like by the end of this story.

New Mutants #13 (X of Swords Pt. 7) – Doug Ramsey gets the spotlight this issue, as he tries to prepare to join the fight for Krakoa.  The problem is, Krakoa doesn’t want him to put himself at risk, and no one else believes he’ll be an effective fighter.  Illyana tries to train him, while Exodus attempts to put another plan into play.  This is a good issue.  It helps to focus the craziness of this event by zooming in on a few characters, while also continuing to develop the story behind Doug and Warlock having joined together.  Rod Reis’s art is nice, and much less stiff than I’ve grown used to seeing from him.

Cable #5 (X of Swords Pt. 8) – I think it’s odd that the SWORD space station, The Peak, was still being used despite the fact that Alpha Flight has had the same mandate over the last few years, and was even staffed by Abigail Brand, the previous leader of SWORD.  Anyway, the Summers family run across some problems there, likely left by Saturnyne for some reason, and then Nate joins the others in the circle of swords, or whatever you call it.  This series is kind of odd, but I like Phil Noto’s art, and I like young Nate.  I’m not sure how or why SWORD is being relaunched in the wake of the X of Swords event, but since it’s an Al Ewing comic, I’m down for it (the first SWORD series was by Kieron Gillen, was great, and only lasted a small handful of issues).  This event gets weird sometimes.

Once & Future #12 – The second arc, focusing on Beowulf, wraps up, as Mary gets involved and helps Duncan out some.  I continue to be underwhelmed with this book, although the revelation of who is getting involved in the next arc did pique my interests a little.  I usually love Kieran Gillen’s work, though, and this time around, I feel like this title has much less going on in it than any book he’s written before.

Star Wars: Darth Vader #6 – The Emperor is unhappy with Vader, so he’s determined to break him down and make him build himself up again as a form of control.  I feel like we’ve seen this before, in Charles Soule’s Vader series a couple of years ago.  The issue is decent, largely because of Rafaelle Ienco’s great art, but I am beginning to fear that we’ve seen the full extent of what can be done with Vader in Marvel’s three series that feature him.

Strange Adventures #6 – The second Tom King book of this week also steeps the reader in unknowns.  Alana Strange goes for a walk with Mr. Terrific, and they discuss their dead children and public art (not in that order), while the Rann-based flashbacks show us more of the war between the peoples of Rann and the Pykkt.  As this series continues, I become more and more suspicious of Alana, and wonder just what she is up to.  It’s interesting that Adam Strange has become an almost negligible part of this book.  I’m surprised we are only at the halfway point here, as it feels like this series has been running for a while now.

Vampirella #14 – I think that Priest is making this book even more complex than it was before, as Vampirella tries to unravel her mother’s machinations, and Katie, the young girl who has become obsessed with Vampi proves to actually be her long-lost sister, and the object of Lilith’s attention.  Sometimes I wish this book came with diagrams, but I do enjoy it a lot.  There are lots of convoluted comics on the stands, but Priest makes it an art form, and consistently has me wishing I could reread the whole series before reading each new issue.

Lazerbeak – Penelope – For the last couple of years, Lazerbeak has been exploring house music, and meditation.  These two things are blended nicely on Penelope, the follow-up to his excellent album Luthor (these are the names of two of his children, all but guaranteeing a third album soon).  Beak explores electronic soundscapes, and creates a real sense of calm on this album.  It’s nothing like his production work for Doomtree, but I love it.

Carlos Niño & Miguel Atwood-Ferguson – Chicago Waves – I’ve been a huge fan of both Niño and Atwood-Ferguson for years now.  Niño makes New Age-y ambient music, while Atwood-Ferguson is the go-to guy for LA hiphop and beat scene artists who want some strings in their music.  This album was recorded live at an International Anthem party, and is basically just the two artists and friends improvising together.  It’s very chill and quite pretty.

Kennebec – Departure – This might be a little bit generic, but so much of the soundtrack of the pandemic for me has been lo-fi instrumental music, and this is among the finest that I’ve heard.