This has been a messed up year because of the COVID-19 pandemic. We’ve been stuck at home since March. Which stink if you enjoy going out to movies. So many of us have had been able to work from home instead of commuting to the office. This means less time stuck on the road and more time on the sofa watching TV. This has been the year when streaming has taken over how we watch shows. But I’m here to tell you that it’s also been a good time for physical media. Why? Because if you’re in a house where your spouse has their work computer going 24/7 and your kids are on their laptops clicking away on virtual classes, you’re not wanting to put more strain on your home’s wifi bandwidth. You dusted off the Blu-ray player and watched movies and classic TV shows without causing anyone to scream about buffering. Or you don’t want to mess up their Zoom time. Physical media keeps things happy in the home.

And now with the holidays approaching, you’re probably wanting a few Blu-ray ideas of what to buy others or tell them to buy you from discs that came out in 2020. Here are a few of my favorite things that arrived after last year’s Blu-ray gift list.

Northern Exposure: The Complete Series (Shout! Factory) revives one of the most fun and quirky shows of the ’90s. Joel Fleischman (Rob Morrow) only made it through med school thanks to a program that pay his tuition, but he has to be a doctor in Alaska for a few years as payback. Instead of getting a cushy gig in Anchorage, he’s assigned the remote town of Cicely. He has plenty of issues dealing with the extreme country life since he grew up in New York City. The show was a hit when it started in the summer of 1990 and lasted 110 episodes. Sure the final season had Paul Provenza and Teri Polo show up to take over as the doctor and his wife after Morrow bolted for a film career after his success in Quiz Show. But it still had Janine Turner as the bush pilot. Northern Exposure hasn’t quite gotten the love or rerun action in my area as you’d expect. I’m not even sure what service streams the series. But that doesn’t matter anymore since you can get the entire series on DVD and watch it at your own pace. Although with the pandemic still raging, you’ll be watching it rather swiftly in the wintry weather as a great excuse to stay inside. By the time you’re done with all six seasons in the boxset, you’ll want a moose walking down your street.

The Good Place: The Complete Series (Collector’s Edition) has all four seasons of series about the strangeness of the After Life. Eleanor Shellstrop (Kristen Bell, Veronica Mars) dies and wakes up in what she thinks is heaven. She even meets her perfect soulmate. But somehow things seem off to her. Especially since she didn’t live a nice life on Earth. Can she really trust Ted Danson (Cheers) as being an angel? Over the course of four seasons, the series playing just the right tones and laughs as heavenly truths are revealed. 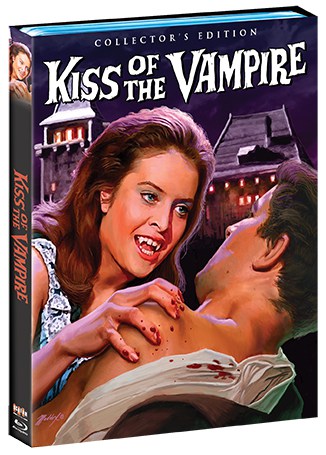 Hammer Horror is getting a massive revival thanks to Scream Factory. If you’ve been curious about the English studio that brought frights to color, now is the time to get into their prime output. How many scares can you handle from Christopher Lee, Peter Cushing and so many of their British compatriots? So many of their films have been upgraded over the last few years from Scream Factory. Over the last year the company has been making new editions of the films that were previously put out by Fox, Paramount and Universal with plenty of bonus features to truly let you understand what was going on. For new fans or old fans, these Blu-rays will bring a new light on Frankenstein, vampires, werewolves and even a vampire hunter from across the pond. The titles in the last year put out from Scream Factory included: Demons of the Mind, The Mummy’s Shroud, Rasputin: The Mad Monk, X…The Unknown, Captain Kronos: Vampire Hunter, Curse of the Werewolf (Collector’s Edition), Shatter, The Lost Continent, The Evil of Frankenstein (Collector’s Edition), Frankenstein and the Monster From Hell, Kiss of the Vampire (Collector’s Edition), Phantom of the Opera (Collector’s Edition) and Brides of Dracula (Collector’s Edition). You can’t go wrong with the gift of Hammer in these rather frightening times. While it wasn’t made by Hammer, Frankenstein: The True Story follows the book a little closer than

Universal Horror Collection Volumes 4, 5 and 6 continued the deep dive into the classic horror vault that should appeal to anyone who lives for MeTV’s Svengoolie on Saturday nights. These are 12 films that didn’t feature their Classic monster core of Frankenstein’s monster, Dracula, the Wolfman and the Mummy. But the movies featured many of the stars from the more renowned films including Bela Lugosi, Boris Karloff, Lionel Atwill and Lon Chaney Jr. Volume 4 had Night Key, Night Monster, The Climax and House of Horrors with Rondo Hatton. What’s interesting is The Climax was the studio’s sequel to Phantom of the Opera. Volume 5 is the hairiest of the bunch with four films about ape-people transitioning. The Monster and the Girl, Captive Wild Woman, Jungle Woman and Jungle Captive get a lot of use out of Hollywood’s gorilla suits. Rondo Hatton returned in Jungle Captive. Volume 6 wraps things up for now with The Black Castle, Cult of the Cobra, The Thing That Couldn’t Die and The Shadow of the Cat. The final entry is a Hammer horror that was distributed by Universal. All the films look great in 1080p with the black and white images looking good and creepy. Scream Factory has audio commentaries on each film so you get lots of background on the films, actors and even the crew.

Gamera: The Complete Collection (Arrow Video) brings together all the mega-turtle action into one shell. Do you remember Gamera from Mystery Science Theater 3000 or the Creature Double Feature? Well now all his films have been upgraded to Blu-ray so you get a clean view of the reptile that’s a friend to children. Even more exciting is all the 12 movies are in a boxset that’s overflowing with special features. You can argue Gamera versus Godzilla, but the hard truth is that Arrow’s Gamera collection stomps Criterion’s recent Godzilla boxset. All the films have their English dubs. You can watch them like you did as a kid when they popped up on TV at random hours. If you can’t find The Complete Collection, there’s going to be Gamera: The Showa Era and Gamera: The Heisei Era boxsets at the end of January.

The Complete Lenzi/Baker Giallo Collection (Severin Films) brings together the four giallo movies made when American actress Carroll Baker (Baby Doll and Giant) went to Italy and worked with director Umberto Lenzi (Cannibal Ferrox). For both actress and director this boxset is a revelation in how good they were together. They rank with Sergio Martino and Edwidge Fenech in cinematic partnership for the genre. Baker plays a variety of characters that get caught up in various murder plots. Lenzi shows off that he’s more than a guy who made gruesome cannibal flicks. Orgasmo, So Sweet… So Perverse, A Quiet Place to Kill and Knife of Ice. This is like the retrospective that you wish had been playing over the weekend at your nearby cool arthouse theater that was shutdown because nobody wants to hear a cough behind them in a dark room. These are four films about treachery in the euro jet set world and not the more grizzly of giallos. The only thing missing from the boxset is a bottle of J&B Scotch. Everyone drinks J&B in these films.

And for those who wanted more Martino-Fenech, we finally were able to buy The Strange Vice of Mrs. Wardh (Severin Films) on Blu-ray. Not only did the transfer look great, but there was a fresh interview with Martino about his giallo masterpiece. Between these two sets, you could finish off a quart of gelato.

Killdozer (Kino Lober) has arrived. The legendary TV movie about a bulldozer possessed by aliens and mowing down workers gets upgraded from a crummy bootleg VHS cassette in my collection. You’ve heard it name checked on Mystery Science Theater 3000 and from the great indie band. Now live the joy that’s a construction site of terror.

Until The End of the World (Criterion Collection) finally brings us the 5 hour cut of Wim Wender’s epic science fiction road trip. I had waited 20 years after being told by a pal in Los Angeles that Wim had shown this cut at a theater out there. And it was as glorious of an experience as expected. Since it came on 2 Blu-rays, there is an intermission so you’re not stuck on the sofa all day. Although because of the pandemic, where did you have to go besides the bathroom and answer the door to find a pizza waiting for you on the stoop?

Dolly Parton Ultimate Collection (Time Life) is the perfect way to absorb the joyful glory of Dolly Parton. So much of her time on television from the start in the late ’60 as a singer on the Porter Wagoner Show to recent concert specials. Every part of her musical career get illuminated from talk shows to variety shows. All her big hits are examined. This is a gift that will take from Christmas morning to New Year’s Eve to watch. Hopefully the vaccine that Dolly Parton donated a million dollars to develop will give us a more social holiday season next year.