There are some names you’ll read in this issue that I’ll share some information as context for you about them; Jason Woodrue was been known as the villain Floronic man in DC lore and his classic Who’s Who bio is below.

Alec Holland would become the hero Swamp Thing; his classic Who’s Who bio is below.

Finally, Pamela Isley is the villain or anti-hero, depending on her era and your POV, named Poison Ivy; her classic Who’s Who bio is below.

This one-shot focuses on Bella Garten who is the villain or gray character known as the Gardener; there is no classic Who’s Who type bio for me to share as the character was only recently introduced in Batman #107 (full spoilers here).

The book opens in modern day, during Fear State, with the Gardener and Batman in showdown.

Her narration tells readers about her own origins, but she’ll omit that from Batman and focus on Poison Ivy who, like her, was mesmerized by their professor who would become the Floronic Man. 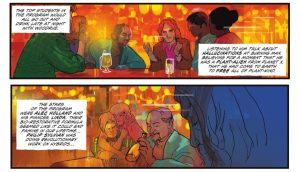 It also would appear that an early lover of Poison Ivy…

…was the Gardener sharing a mutual attraction and passion for nature. 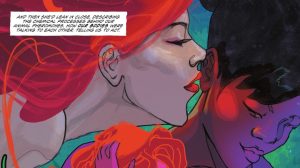 As part of the students working with Woodrue she did her own experiments that were not sanctioned. 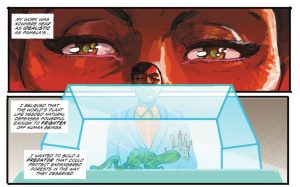 Her and Ivy had disagreements over Woodrue which would prove to be the end of their relationship. 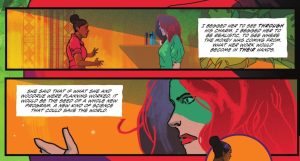 Ivy would go onto have a relationship with Woodrue as well being experimented on by him.

The Gardener was still looking for ways to help the planet and Ivy, but…

…she kept track of her life of crime from a distance, but… 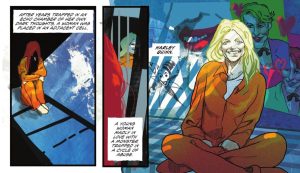 …was pleased she found someone to love…

In fact, she met up with Gardener and…

…revealing a plan to have the world fall in love with her so she can have the people do what’s right for the planet.

The Gardener is telling Batman all this so that he will show compassion when dealing with Ivy who is now only in one physical form and presumably one mental persona as of Batman #117 (full spoilers here).

The Gardener still wants to help the planet in her own way and we may learn more in the Fear State one-shot finale.

That would be in Batman: Fear State Omega #1 which is out next week.

A wild ride, but a compelling read that weaves the past and present of DC together seamlessly. Amazing art. 8 out of 10.