Seven championships were on the line from AEW All Gear 2022’s full card. 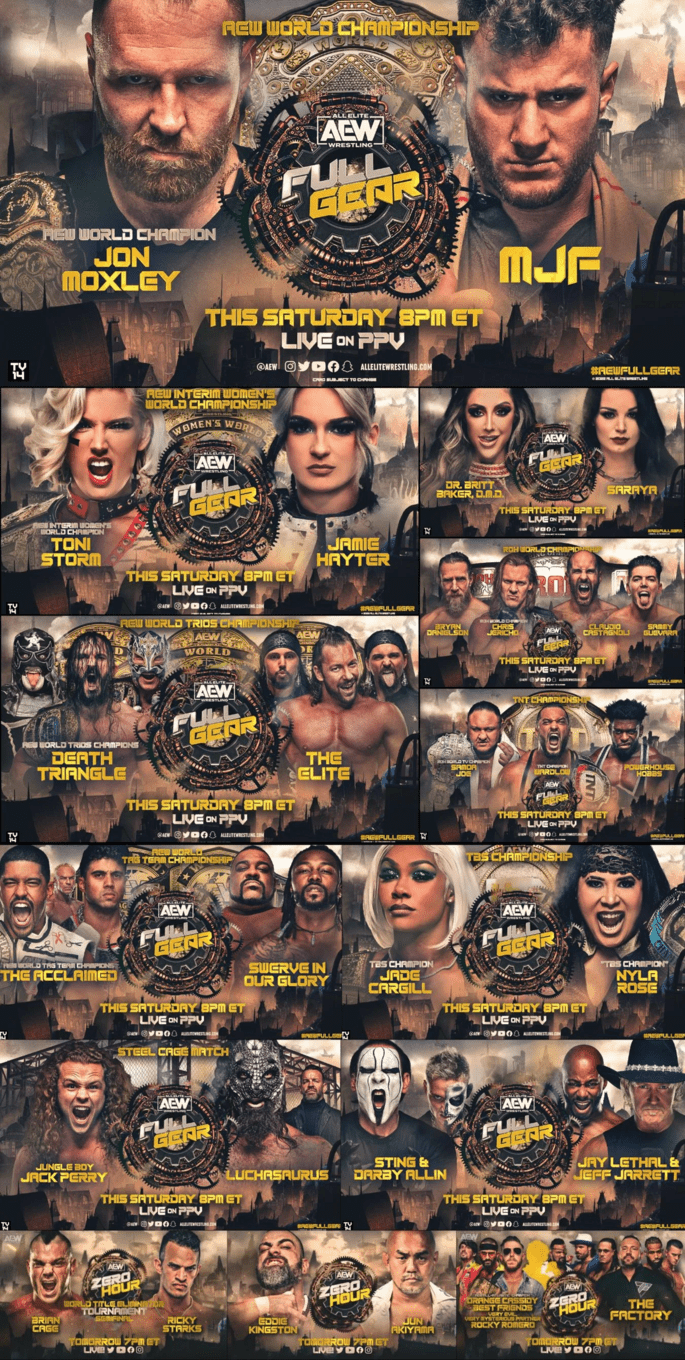 Three new champions were crowned at the PPV per AEW. 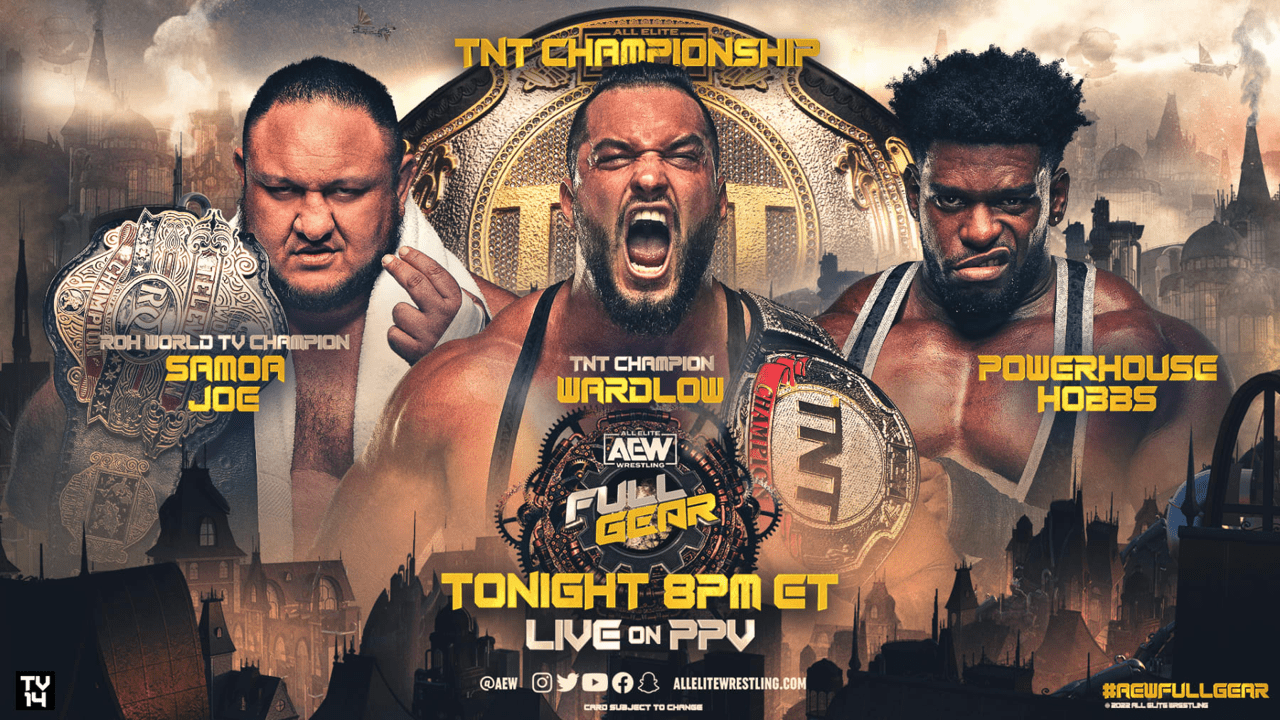 Wardlow went right after Samoa Joe, blasting him with forearms and knee strikes. Powerhouse Hobbs just paced around the ring, letting Wardlow and Joe tear each other apart. Then Hobbs jumped out of the ring and smacked Wardlow into the metal ring steps.

Samoa Joe battled back with a running boot across the side of Hobbs’ face. Samoa Joe booted Wardlow and then sat out with a senton! Wardlow tackled Joe and then rammed Hobbs into the corner. Wardlow planted Samoa Joe with a spinebuster.

Wardlow shoulder tackled Hobbs, sending him to the arena floor. Samoa Joe jumped on both of them with a tope suicida. Hobbs charged at Samoa Joe and speared him into the barricade. Hobbs rocked Wardlow with a spinebuster for a two-count.

Wardlow powerbombed Hobbs and then hit a second powerbomb on Hobbs. Samoa Joe cracked Wardlow from behind with the title belt and then choked out Hobbs. 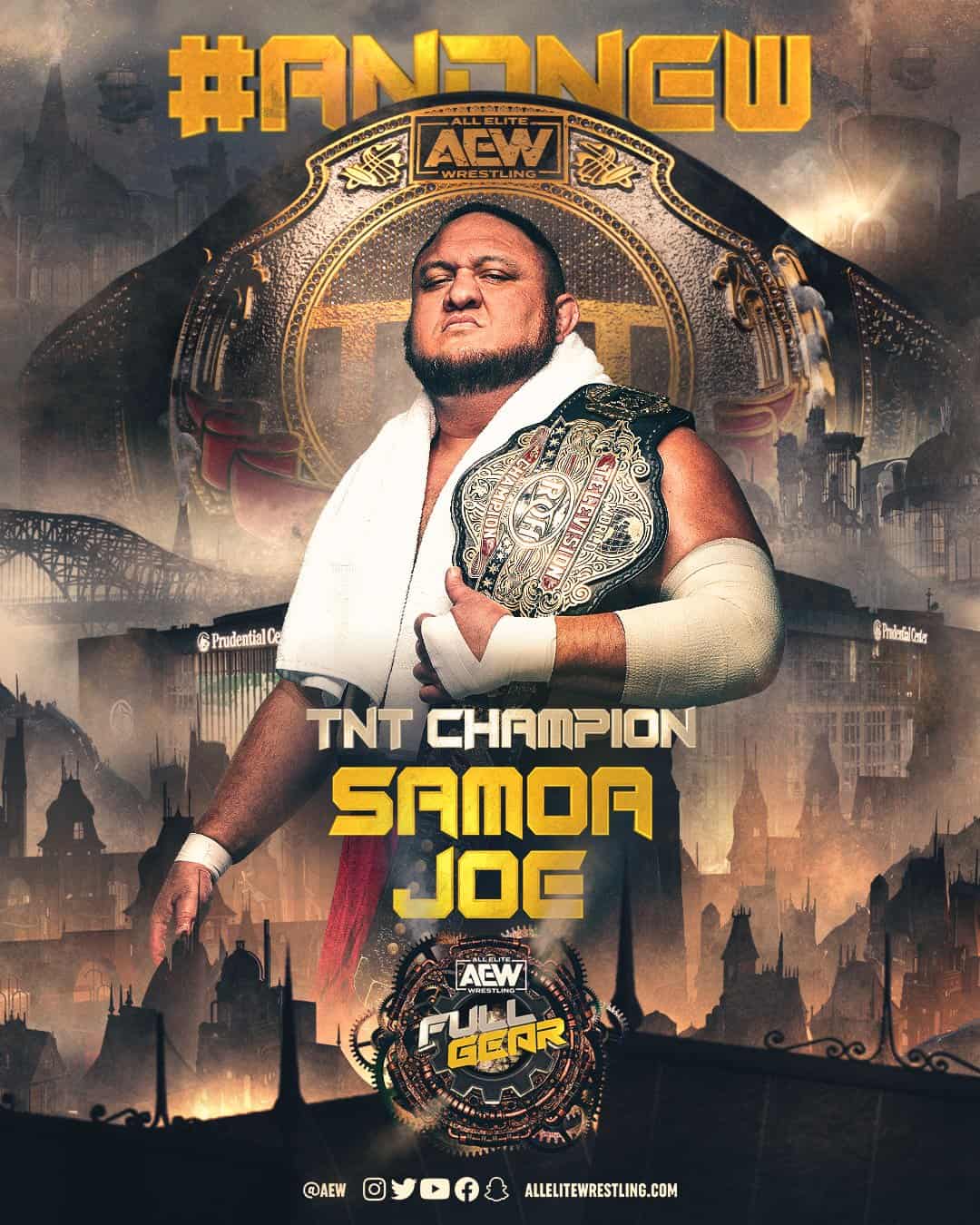 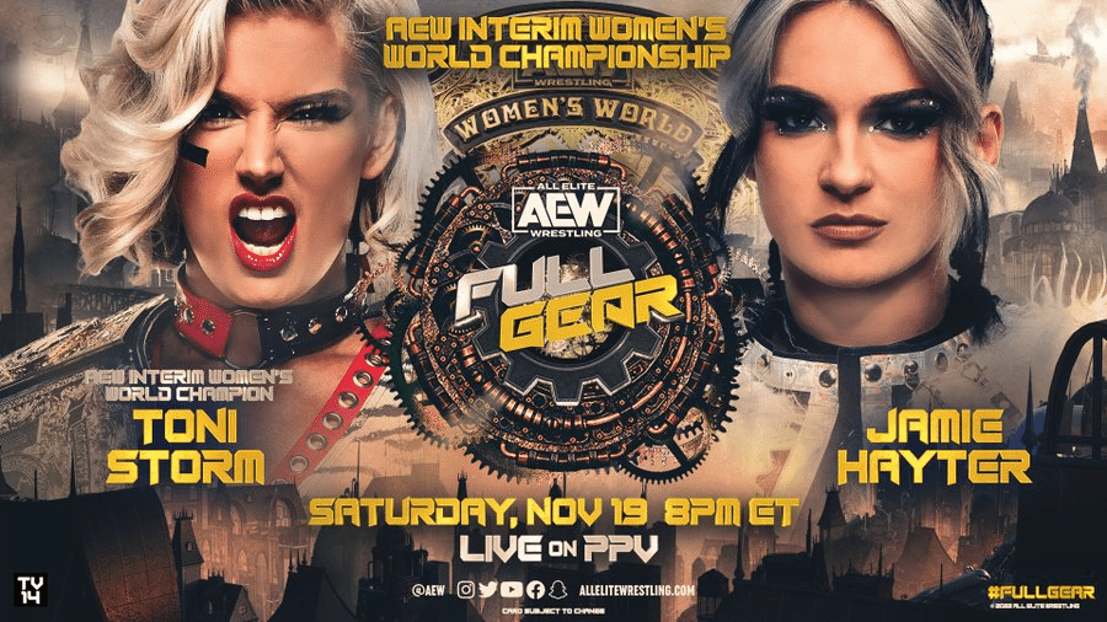 Hayter grabbed a side headlock on Storm. Toni reversed it with a headlock of her own, followed up by a shoulder tackle.

Storm hit a shotgun dropkick and then sent Hayter soaring outside the ring with the running hip attack. Storm pounded away with a sledgehammer fist to Hayter. Jamie Hayter whipped Toni into the steel guardrail.

Hayter hit a snap suplex on Storm. Toni rallied back with a hip attack in the corner to Hayter. Storm followed up with a swinging DDT for a near fall on Hayter.

Rebel snuck down to the ring. Hayter and Storm battered one another in the middle of the ring. Storm’s nose was busted open. Rebel clocked Storm with the belt! The ref didn’t see it. Hayter used the sliding lariat on Storm for a two-count! Ref Paul Turner ejected Rebel from the ringside area.

Storm tried for the hip attack by Hayter moved. Storm tumbled out of the ring. Baker snuck up and cracked Toni in the head with the belt. Hayter tried to pin Toni but Toni kicked out! Toni spiked Hayter with the Storm Zero but Hayter kicked out! Storm knocked Baker off the ring apron and when Storm turned around, Hayter was there to hit Storm with the Hate-Breaker for a near fall.

Baker removed the turnbuckle pad. Hayter whipped Storm into the exposed turnbuckle, hit her with the rip cord lariat, and then pinned Toni Storm! 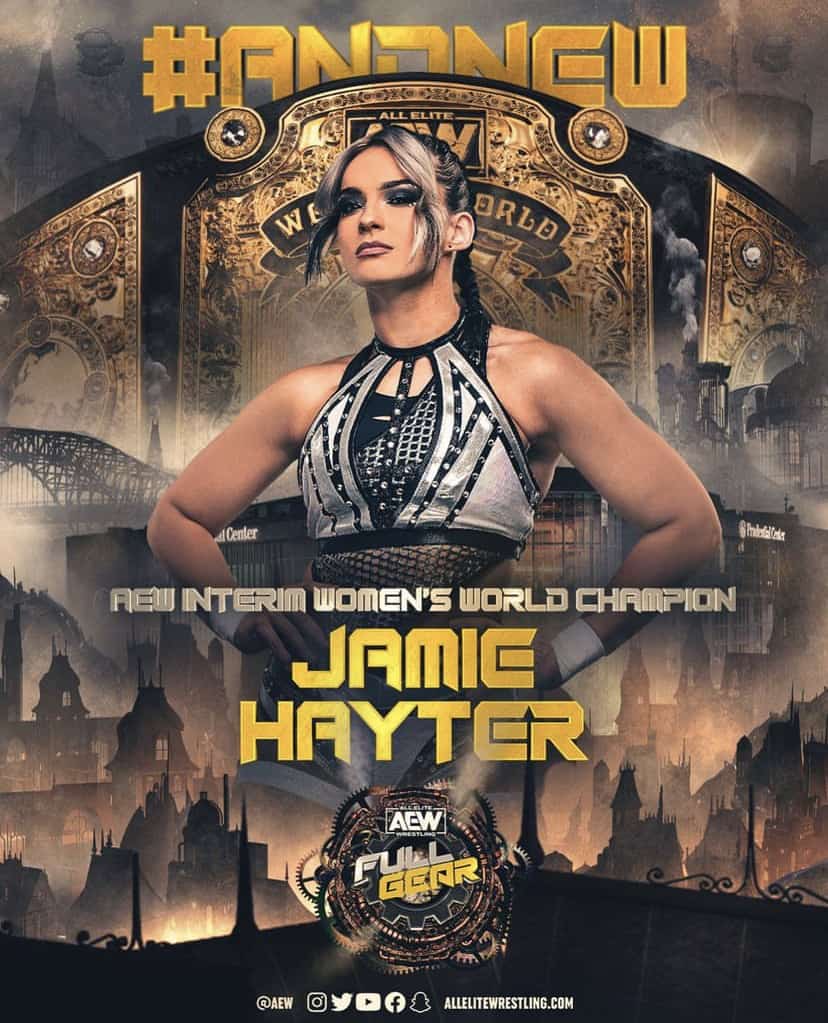 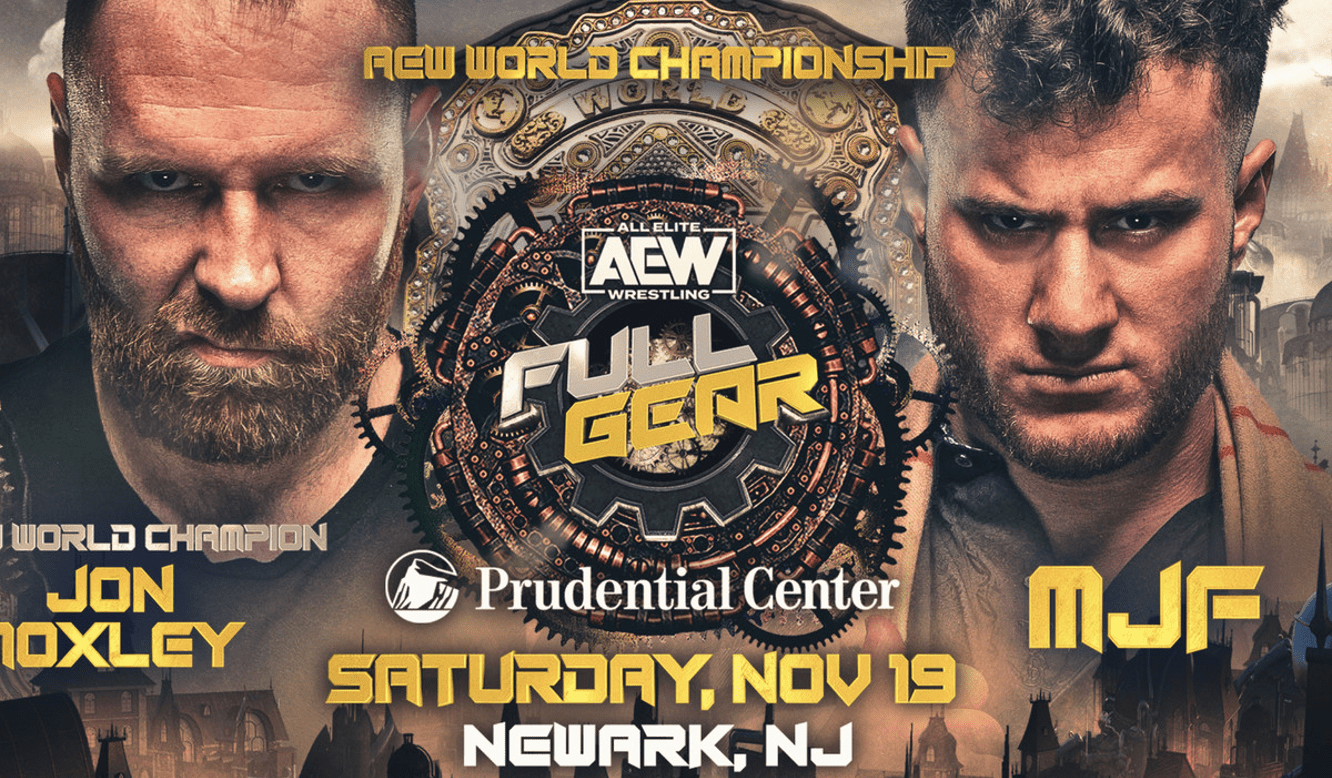 Mox slapped MJF across the face at the start of the match. MJF slapped Mox back. Moxley started laying in heavy shots. Moxley bit down on MJF’s forehead.

MJF stomped a mudhole into Mox, but the champ rallied back with a hard clothesline. Moxley planted MJF with a falcon arrow and then transitioned into an arm bar.

Outside the ring, Moxley whipped MJF into the steel ring steps. MJF retaliated with a desperation clothesline inside the ring. MJF jabbed at Moxley and then knocked him down with a left-handed hook.

MJF countered the Paradigm Shift, whipping Moxley into the turnbuckles. Moxley waited on MJF and then rocked him with a cutter. Moxley grabbed MJF’s wrists and then started to stomp on MJF’s head.

MJF nailed Moxley with a tombstone piledriver on the apron. In the process, MJF injured his left knee. Moxley smashed MJF with a piledriver off the apron and down through a table!

Moxley crunched MJF with the Paradigm Shift. Moxley applied the figure four on MJF. Finally MJF reversed it, but Mox grabbed the ropes to force the ref break. Both the champ and the challenger were clutching their knees.

MJF waffled Mox with the Heat Seeker for a near fall. MJF tried for another Heat Seeker but Mox shoved him off and then chop blocked MJF’s leg. Moxley took MJF and dropped him with an avalanche Paradigm Shift!

Mox and MJF slugged it out in the center of the ring with forearms. Mox charged at MJF but MJF pulled the ref into Moxley’s path, and Mox collided with the ref. MJF pulled out his Dynamite Diamond Ring. William Regal walked to the ring and ordered MJF to put the ring down. MJF threw the ring down! Moxley grabbed MJF from behind with a bulldog choke, and in the process, the second referee was knocked down. Moxley looked on the bulldog choke, and MJF was tapping, but the ref didn’t see it. 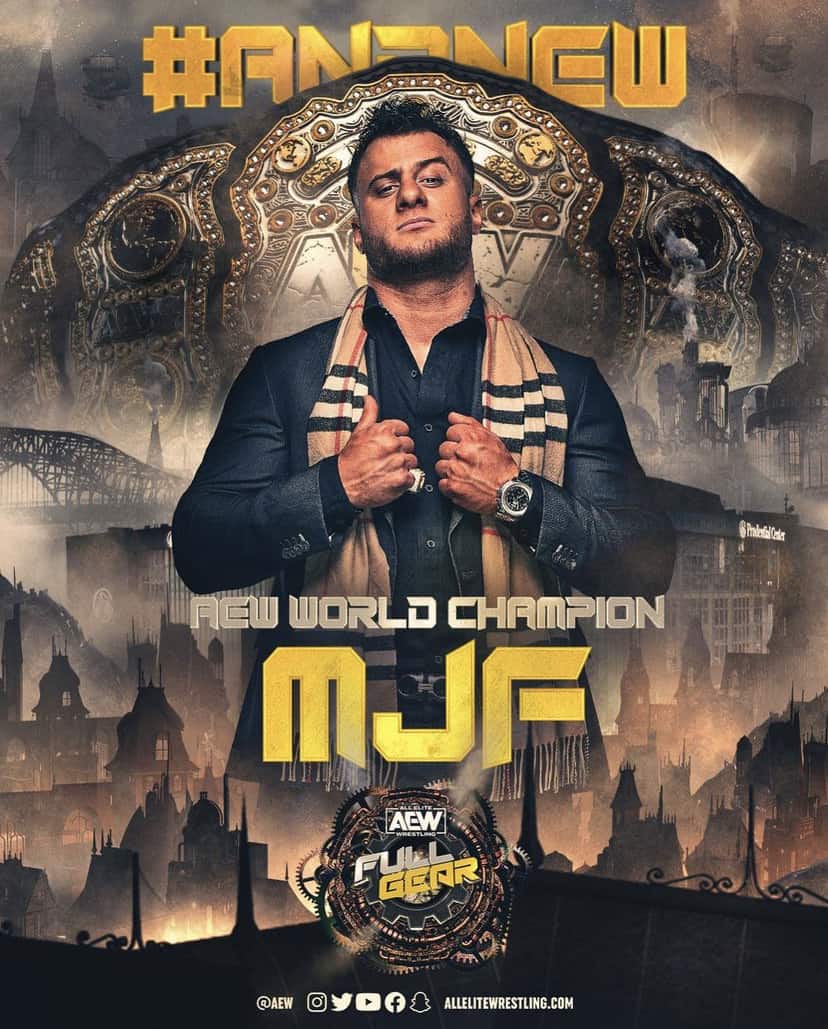 Full results here and congrats to the new champs.