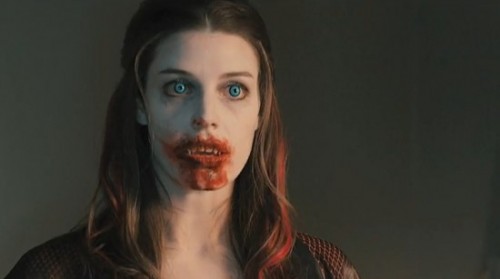 If there’s anything to be learned from reading Robert Saucedo’s “Bad Movies Done Right” column it’s that the best kind of horror movies have the right mix of horror and comedy. Suck, a Midnighters Selection at SXSW 2010, is just that.

Robert and I had the pleasure of seeing this Canadian vampire comedy and it was a blast. One of the best Midnighters at the festival – next to The Loved Ones and Tucker and Dale Vs. Evil.

Suck can best be described as a rock ‘n’ roll vampire spoof about a band on hard times, who will do anything for a record deal.

During a road trip, their image gets an extreme makeover when bass player Jennifer (Jessica Paré) disappears one night with a hip vampire called Queeny (and they have a rhapsody that is straight-up Bohemian). Jessica returns with a new sexually charged charisma that drives the audiences wild. One by one the band succumbs to vampirism and their new image propels them to stardom.

Now that Universal Pictures UK has picked up the distribution rights to the Canadian horror-comedy, it’s only a matter of time before it will see a release stateside. With a “killer” soundtrack and cameos galore – not to mention a vampire hunter named Eddie Van Helsig – Suck is one of the best horror comedies in recent memory.

Be sure to check out the film’s official website for more information and you can also cast your vote for the DVD cover over at the film’s Facebook page.