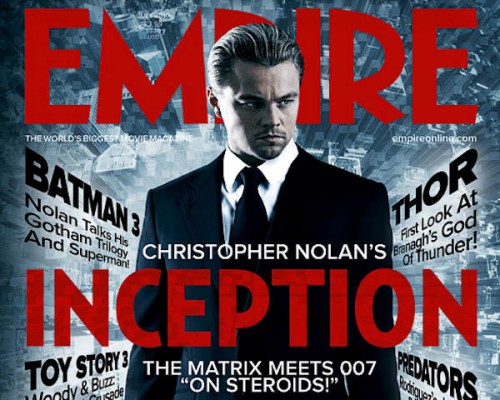 Timed with the release of Nolan’s next film, the Inception edition of U.K.’s Empire magazine has some pretty interesting quotes from the writer-director on a number of topics. This information comes courtesy of ComingSoon.

On whether he’s officially committed to direct the Dark Knight followup due June 20, 2012:

“No I haven’t. There is a point where you’re just being precious about it and people get annoyed, but the God’s honest truth is I work on one movie at a time. I’m only capable of doing that, so my head will continue to be firmly in [‘Inception’] for another few months.”

There are some things, though, that Nolan can confirm. “My brother is working on the screenplay. We came up with a story that we are very excited about. We particularly like where we are taking the characters and what the ending is… There are things for me to be very excited about in addressing the characters again. But ultimately it always comes down to the script, and can we make a great film from this? That’s something I will firmly be turning my attention to figuring out fairly soon.” It will be, he said, “the finishing of a story rather than infinitely blowing up the balloon and expanding the story.”

Empire asked whether the villain could be a returning (and recast) Joker. “No,” said Nolan resisting to elaborate, “I just don’t feel comfortable about it.”

On his involvement with the next Superman reboot, expected for December 2012:

It was recently revealed that he would take on a mentor (or “godfather”) role for the Superman movie, but he’s not that comfortable with that title. “It’s much more specific than that,” he explained, “What it is, while David Goyer and myself were putting together the story for another Batman film a few years ago – you know, thrashing out where we might move on from ‘The Dark Knight’ – we got stuck. We were just sitting there idly chatting and he said, ‘ By the way, I think I know how you approach Superman,’ and he told me his take on it. I thought it was really tremendous. It was the first time I had been able to conceive of how you would address Superman in a modern context. I thought it was a very exciting idea.”

Nolan said he took that idea and pitched it to Warner Bros., and the studio got excited, too. “But it’s not something for me to direct,” he added. “It’s something we were just trying to put together a vision for, and then find the right person to take it forward.”

On the possibility of a Batman/Superman synergy being inserted into his films:

Over at Dark Horizons, Nolan opens up about Inception and why it is like a James Bond film.

I’ve been plundering ruthlessly from the Bond movies in everything I’ve done, forever. They’re a huge influence on me.” Nolan also said his favourite is On Her Majesty’s Secret Service because “it’s by far the most emotional” and he tried to achieve a similar “balance of action, scale, and romanticism and tragedy and emotion” in Inception.”
Share on Facebook Share on Twitter Share on Reddit Share on Email