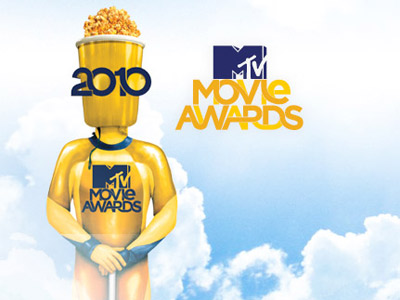 Last night at the MTV Movie Awards, the too wordy movie titled The Twilight Saga: New Moon won in all the categories it was nominated, and Kristen Stewart and Robert Pattinson walked away with multiple golden popcorn statues. The awards show, which amounted to nothing more than a forum to use the word f**k every few minutes and mention New Moon every five seconds, had a few highlights – none of which involved the stars of the vampire romance.

Stewart won for best female performance over Oscar winner Sandra Bullock, a blue alien, a woman who was gullible to fall for Channing Tatum and a Muggle. Stewart and Pattinson shared a kiss over their Best Kiss victory, which was later upstaged by Bullock and Scarlett Johannson who played a brief game of tonsil hockey. The winner: every man’s libido. Pattison also won Best Male Performance over Taylor Lautner’s abs, Zac Efron’s grin, Daniel Radcliffe’s cockiness and cry baby Tatum. And in the you-got-to-be-f**king-kidding-me Global Superstar category, Pattinson defeated his Twilight costars, Harry Potter and the Mad Hatter. Global superstar, really? How many hundreds of millions did Remember Me make? Oh yeah, it didn’t.

With other categories like Best Villain (Draco Malfoy over the Jew Hunter – get real), Best WTF! Moment, and Biggest Badass Star, which saw Angelina Jolie nominated for Salt (not yet released yet still gets a nomination?), this is clearly a ceremony tailored to MTV’s audience of teens and early-twentysomethings who have no perception of cinema outside of what is fed to them on entertainment shows and TV spots.

At least Cruise was there to steal the show, taking a break from his couch-jumping exercises to share the stage for a highly choreographed dance routine with Jenny from the Block.