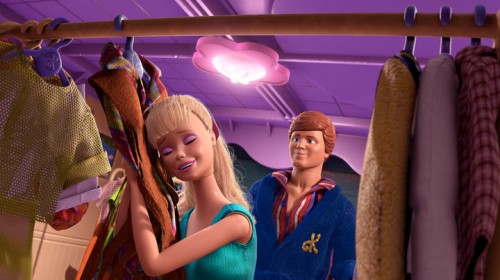 The Pixar Blog has discovered an Amazon.com listing for a new children’s book titled Play-cation!. The picture book will be published by Random House/Disney on August 9 and it’s Amazon listing reveals that it will be based on the upcoming Toy Story short film to be included with this summer’s Cars 2.

The short film will see the Toy Story gang create a make-shift Hawaiian paradise for Barbie and Ken after the two dolls are accidentally left behind when Bonnie goes on vacation in Hawaii.

To read the full synopsis and learn full details about the forthcoming picture book, visit The Pixar Blog via the link below.

While a part of me looks forward to more animated adventures with the Toy Story cast of characters, another part of me hopes this doesn’t signal the death of original short films from Pixar featuring new characters. Pixar’s short films have always been one of my favorite parts in going to see one of the studio’s movies. It’s always been a fun surprise to see what new mini-story the studio’s animators have come up with. The studio’s last short Day and Night, which mixed 2D and 3D animation in an amazing way, showed us that the studio was not done yet in challenging itself to create new ways to tell a story.

Hopefully the new Toy Story short is a continuation of this challenge and not another clue that Pixar is ready to become a Human Centipede of animation — regurgitating the same characters over and over again until audiences tire of them. Cough. Dreamwork’s Shrek. Cough.

At ROH Supercard Of Honor AEW Announces That Samoa Joe Is All Elite!