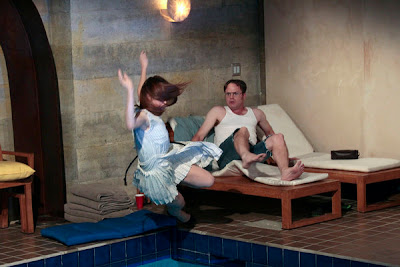 At a certain point, I guess I’ll just have to accept that while The Office is still a show I like, it’s no longer the show it once was. Last night’s episode, “Pool Party” was perfectly acceptable yet didn’t manage to hit the level of comedy that previous Dunder Mifflin party episodes have.

Thanks to his divorce from Maura Tierney, Robert California had to sell his house – a playboy mansion type home that never saw the debauchery it was intended for because he got married and settled down. So Kevin suggested one last hurrah, and pretty soon the entire office was at Robert’s house for a pool party.

Much of the episode centered around Erin trying to make Andy jealous, because Meredith revealed to her that Andy had followed her home after the Christmas party. She used Dwight to do it, but Andy was too concerned with a missing engagement ring to take notice. The storyline itself was just OK, but Ellie Kemper was hilarious. Erin’s lingering feelings for Andy and jealousy about his new relationship has really given her a chance to show off her comedic chops.

There wasn’t a lot else going on in the episode, but there were little things that made me laugh. Darryl was nervous about exposing his less-than-fit body to his crush Val, but eventually gave in and had a good time. Toby got way in over his head pretending to be a wine expert. Jim kept trying, and failing, to make an early exit – something that he apparently is a pro at. Gabe and Ryan were hilariously competing to be the most intense party-goer, staying until the wee hours of the morning to impress Robert. Kelly found Andy’s misplaced engagement ring (he’s not planning to propose yet – his parents just gave him a ring because they like his new girlfriend) and then, when Andy told her a ring from a failed marriage is cursed, tried to destroy it with Phyllis.

While I didn’t dislike this episode, I do think some improvements need to be made. If I’m meant to really care about the Andy/Erin/Jessica storyline, Jessica needs more of a personality. I want Andy and Erin together, and right now Jessica is just a bland brunette standing in the way. What am I supposed to think about her? Is she nice? Bitchy? What? Also, without Pam around Jim’s role in the world of the office has essentially evaporated. I loved the cold open where he tried to make Stanley laugh by pulling pranks on Dwight, when really Stanley and Dwight were in cahoots by getting Jim to feed them by making him think Stanley only found food-related humor funny. There needs to be more stuff like that. Otherwise, he’s just a nice dude working an OK job who can’t wait to get home to his wife and kids. Admirable, but not funny or interesting. What did you guys think about “Pool Party”?

Other quotes and moments I liked: