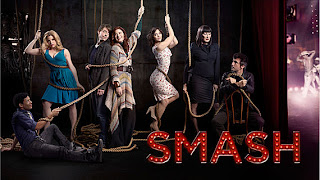 If you checked out my review of the Smash pilot, you’ll recall that I enjoyed it and saw the potential for a show I could really enjoy. I’m already more engaged with Smash after two episodes than I was after watching several episodes of Once Upon A Time, another new show I took on that I’ve now dropped.

The second episode of Smash brought highs and lows. To get the elephant out of the room right away, one major low is the teenage son of Julia. Wise up and recast that part, Smash showrunners, recast it now! “Wooden” doesn’t even begin to describe how clumsily he delivered his lines. How would you even critique a performance like that? “Um, could you maybe try, you know, acting, rather than reading these lines as though you’re seeing the words for the first time and also have never experienced emotion?” And not to place all the blame on the actor, he was given dialogue that I can only assume was meant for a young child, perhaps around the age of ten. All the stuff about how mommy promised me a sister from China, and what will happen if we don’t go get her? This dude is, like, sixteen! He’s old enough to know that his sister is not yet born! That there isn’t a baby over in China, earmarked for his family, left to starve if they don’t show up. Puh-lease.

Robotic teenage son aside, the adoption storyline is clearly the weak link in Smash. Debra Messing is doing the best she can, with emotional faces and cheesy letters to imaginary birth mothers, but it really brings the other storylines to a screeching halt whenever we revisit this arc.

What’s interesting is that the other personal storylines don’t bore me at all. I’m very intrigued by Eileen’s divorce with her husband, and the friction caused between Karen and her dashing boyfriend Dev by a late rehearsal upped my interest in their relationship as well. I like that Karen has a sweet, understanding guy at her side and as she finds herself in more and more demanding roles it will be interesting to see if that lasts. I also liked that Dev wasn’t immediately threatened by the idea of a director inviting his girlfriend over for a late night coaching session. Instead, he told Karen to “get used to it”, which was a dose of tough love I think she needed. 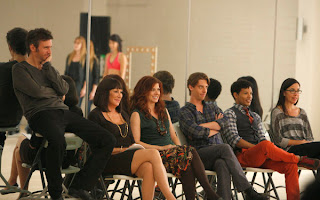 I know a lot of other viewers and critics think that throwing Ivy in bed with Derek is too obvious an attempt at putting Karen in the sympathetic underdog role, but I have to disagree – sex aside, I surprised myself by rooting for Karen at the end of this episode.

Three of the four people involved (Tom has always been in Ivy’s corner) have been telling us that casting Marilyn is a really difficult choice. At first, it seemed that would be the major flaw in the series as Megan Hilty was out-performing Katharine McPhee. But, harsh as this may sound, I began to see Hilty as too old to play Marilyn. When it came to the early years, to the transformation from Norma Jean to Marilyn, Karen owned it. They kept talking about innocence, but I thought it was youthfulness that really separated the two aspiring Marilyns. On top of this, Ivy’s cartoonish Marilyn impersonation bothers me. So there the dilemma is – do they choose the experienced girl who overdoes the Marilyn, or the fresh-faced newcomer who’s not quite doing anything at all?

And then, yes, there’s the fact that Ivy so quickly fell into bed with the director while she was still auditioning for the part, a move that Karen flatly rejected. However, I thought a more interesting concept was the simple idea that Ivy began the audition process with connections Karen couldn’t dream of having – we saw this as everyone gushed over Ivy before the final auditions while Karen say alone, until Julia went over to say hi. Smash wants to make sure you know Karen is the one to root for because even though the part was awarded to Ivy at the end of the episode, eventually Karen will replace her. (This seems rather obvious.) But I don’t think they need to work quite so hard to convey this.

I enjoyed most of the music scenes this week, and I like that Smash seems to be setting these scenes up in a way that Glee only does occasionally when I wish they’d do it all the time. The first scene, Karen singing “Call Me”, was a fantasy sequence – she was actually at her waitressing gig, waiting for a phone call about her audition. 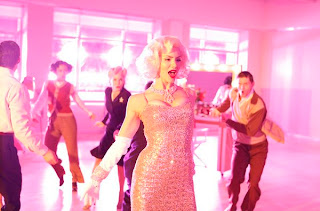 The Marilyn songs were also fantastic, and staged beautifully. I find “Let Me Be Your Star” super catchy, and I had a lot of fun watching McPhee bring her innocent sex appeal to “20th Century Mambo”. Where the show fell flat for me was Hilty’s over-earnest performance of “Crazy Dreams”. I actually like the original Carrie Underwood song because it’s fun, young and upbeat. But Hilty’s slowed-down lounge version just didn’t do it for me. It was painfully earnest and literal, and frankly I couldn’t wait for it to be over.

I’m still really enjoying Smash, but I think it’s becoming obvious that this is not a show for everyone. If you don’t think this “Marilyn” musical sounds like a good idea or if you don’t think Katharine McPhee is a particularly talented triple threat (for me, all it takes is watching this video), then you won’t be able to buy what Smash is selling you. But for what it’s worth, I’m into it.