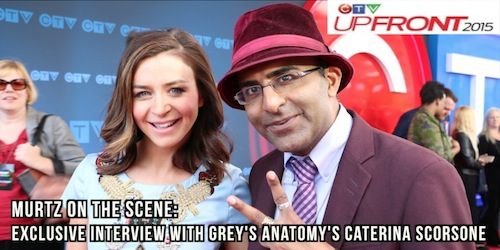 Even the most ardent Grey’s Anatomy fan can admit that the new season is critical in determining whether the show will return for another season.

The 12th season of the stalwart romantic medical drama debuted last week on CTV and ABC and this is the first time that the series will not feature Patrick Dempsey in a starring role (as Dempsey’s character, Dr. Derek Shepherd) was shockingly killed off last season.

In that regard, both diehard and casual viewers alike are wondering if the show can continue considering all of its recent cast departures that include the aforementioned Dempsey, Sandra Oh, Chyler Leigh, and Eric Dane. While Shonda Rhimes and her team have done an excellent job at creating new and compelling characters, it’s clear that the series regulars are now more important than ever.

It is in that regard that I was excited to catch up with Caterina Scorsone at the CTV Upfront earlier this year.

The Canadian actress plays Dr. Amelia Shepherd on the series and, with the death of her character’s brother last season, will now be one of the central characters on Grey’s Anatomy. It’s clearly a role that the Toronto-born actresses relishes as she described to me on the red carpet as we discussed how Amelia will cope with the loss of her brother. We also chatted about the pressures that come with being the only Shepherd on the series.

We discussed Amelia will cope with the loss of her brother and the pressures that are attached to now being the only Shepherd on the series.

Grey’s Anatomy airs tonight at 8p.m. on CTV and ABC.