Can you hear that buzz? It’s Stung coming out from Scream Factory this November. Here’s the press release: 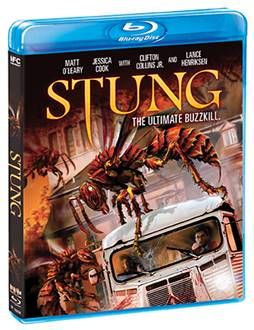 Created in the vein of the 1950s Giant Monster movies, Stung pits wasps against WASPS in a tale of contemporary “bee-movie” madness set at an upscale garden party. A delightfully gory creature feature, Stung will make its Blu-ray and DVD debut on November 3rd from Scream Factory, in partnership with IFC Midnight. Stung features a swarm of bonus content, including audio commentary with director Benni Diez, producer Benjamin Munz, and writer Adam Aresty; a Making of ‘Stung’ featurette; production blogs; and more! Fans can pre-order their copies now by visiting ShoutFactory.com

· The Making of STUNG