Hello and welcome to Inside Pulse’s live coverage of WWE Hell in a Cell 2015!

Check out our previews of the event:

All week there have been rumors as to who will face John Cena for the US Title at the PPV.

The pre-show is set to begin soon!

They all comment on the mystery opponent for Cena, with Corey picked Baron Corbin, Byron picking Cesaro and Booker T teasing someone “mysterious” from Cena’s past.

Promo with Kevin Owens outside the Staples Center. He cuts a promo on the Magic Johnson statue and the LA Lakers.

John Cena announced that the US Title Open Challenge will kick off the PPV.

Cesaro, Neville & Dolph Ziggler vs. Wade Barrett, Sheamus & Rusev
Everyone gets an entrance. Match begins chaotically and after a couple minutes heads to a kickoff show COMMERCIAL

Barrett has Dolph in a headlock when we come back. Barrett continues to control. Tag to Rusev and heat continues on Ziggler. Hot tag to Cesaro and he gets a nice pop. European uppercuts on Barrett from corner to corner. Cesaro going crazy on everyone. Cross body by Cesaro on Barrett gets only 2. Stardust and the Ascension are scouting from the crowd. Cesaro goes for the Swing but Rusev breaks it up. Neville bounces off of Cesaro onto the others on the floor. Superkick by Dolph on Barrett. Swing by Cesaro on Barrett. Crowd counts for a while but they lose count it goes on for so long. Red Arrow by Neville for the pin.
Winners: Cesaro, Neville & Dolph Ziggler

Tom Phillips talks to the Dudley Boyz in the Social Media Lounge.

Sofia Vergara and Joe Manganiello in the front row. John Cena cuts a short promo, hearing mostly jeers from the crowd, and opens up the challenge. First, Jack Swagger’s music starts but Zeb Coulter comes out on a scooter. Strange. Crowd is confused. He cuts a promo and introduces… Alberto Del Rio!!! Wow that was a surprise!

Somehow ADR tweeted as it was happening:

US Title
John Cena (c) vs. Alberto Del Rio
It’s fresh in a sense, but we really have seen this match many times. Zeb is ringside with Del Rio and is apparently his new manager. Back and forth and ADR takes control. Cool backbreaker by ADR. Del Rio continues to control. Del Rio signals for his arm breaker, and the crowd chants “Si!” with him but Cena pops up and takes out ADR. Cena begins rolling out the offense. Belly to back drop thing. Five knuckle Shuffle. Goes for the AA, but ADR floats back and hits a backstabber. Standing kick to the face and ADR just pins Cena. Flat finish, but crowd was happy to see it.
Winner and NEW US Champion: Del Rio 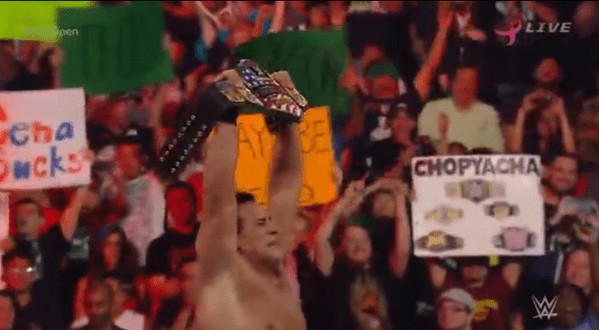 It strains to make sense when Cena takes finisher after finisher from Rollins and Owens and beats them but then after a few minutes of tepid offense from ADR, he gets pinned with a kick.

Backstage, Seth Rollins chats with HHH and Stephanie McMahon. Corporate Kane comes in and says he is sorry for his transgressions but is here to serve. Seth objects and HHH/Steph send him away. He wishes Seth luck and then says “youre gonna need it” in a Demon voice.

Hell in a Cell
Roman Reigns vs. Bray Wyatt
Both men going for power moves in the early going. Both are “smiling” when they get hit. Brawling moves to the floor. Reigns with the drive by, sending Bray face-first into the fence.

Reigns back up and fights back. Then sends Bray into that chair that was jutting out. Roman grabs TWO kendo sticks and goes to work on Bray. Reigns goes under the ring and grabs a table, which gets a big reaction from the crowd. Goes for a second. Sets up the tables on the floor. They vie back and forth on the apron. Bray then hits a Rock Bottom on Reigns from the apron through the table on the floor. Crowd chants Holy Shit.

More brawling. Bray charges at Reigns on the floor. Dueling Lets Go Roman/Roman Sucks Chant. Back into the ring and Bray controls. Brings Roman to the top rope for a possible superplex through a table in the ring. Reigns fends him off and sends Bray off the turnbuckle and thru the table! Roman covers and Bray kicks out at 2. Back and forth. Sister Abigail but Roman rolls up Bray for 2. Superman punch! Only gets 2. Roman spears Bray from the ring apron through a table on the floor! Awesome spot.

Both men back in the ring and hurting. Roman charges at Bray who stops him, hits Sister Abigail and covers. Roman kicks out! Bray sets up kendo sticks in the corner sticking out horizontally. Brings Roman over to use them but Roman gets out, knocks Bray back and hits the spear for the clean pin. Really strong match.
Winner: Reigns

The stars are all here for Hell in a Cell. Mark Wahlberg is here! Billy Gibbons of ZZ Top is also here!

WWE Tag Team Titles
New Day (c) vs. The Dudley Boyz
Kofi and Big E come out without Xavier, who is selling an injury. They brought the broken trombone as a tribute. Kofi promised to play the bongos on D-von’s head, and Big E will play bass drum on Bubba’s belly like a caucasian Kamala. Dudleys come out and the match begins with D-Von and Kofi. Dudleys take control early and New Day rolls to the floor to regroup. Back in and New Day takes control. Long heat sequence on the Dudleys. Eventually Bubba takes control. Does a dance to mock Big E as he sets up for Wazzup. D-von comes off the top and hits the headbutt to Big E’s crotch. Kofi comes out of no where with a dropkick on both Dudleys. Kofi grabs the trombone but then tosses it to Bubba and takes a fall as the ref turns around, just like Eddie Guerrero.

Bubba says he didnt do it. Ref goes to call for the DQ but then just doesn’t for reasons unknown. Bubba cracks the trombone in half. They signal for 3D. But Big E hits Bubba with a trombone fragment. Then D-von clears Big E to the floor. Kofi hits Trouble in Paradise on Bubba for the pin.
Winners: New Day

Kofi and Big E celebrate and dance with the trombone fragments.

WWE Divas Title
Charlotte (c) vs. Nikki Bella
They go back and forth in the ring and fairly quickly move to the floor. Nikki takes control and works on the back. Brings Charlotte into the ring. Nikki dominating with various submissions. Nikki locks in the half crab. Charlotte won’t tap. Nikki lets go of the move and goes back to work on Charlotte’s back. Monkey flip onto the ropes by Nikki. Charlotte with a rebound after Nikki goes for a middle rope springboard and Charlotte ducks. Someone is busted open! Nikki takes Charlotte up to the top rope. Nikki was going for a belly to back superplex, and had her face against Charlotte’s ass. Then Charlotte pushes back, does a backflip in air and somehow lands while slamming Nikki. It was pretty weird but cool. Charlotte then locks in the figure eight but Nikki scurries to the ropes in time. Brawling to the floor and Nikki does an Alabama Slam onto the ring apron.

Looked pretty sick. Back into the ring. Nikki goes for a figure four, but Charlotte turns it into a figure eight and Nikki taps.
Winner: Charlotte

After the match Becky Lynch and also Paige run down to celebrate. Paige runs faster so that she can get to Charlotte first.

Dean Ambrose congratulates Roman Reigns backstage for ending it. Time to celebrate! Dean goes ahead but Roman is beat up and needs a moment to rest.

Bill Simmons is in the crowd! He picks up his son and points to the son’s Cena shirt and shakes his head, mouthing ‘where did it go wrong’. Seth Green is also here!

WWE World Heavyweight Title
Seth Rollins (c) vs. Kane
Slow start. Back and forth. They both move to the floor but then back in. Seth is mostly in control. Match has been slow to start. 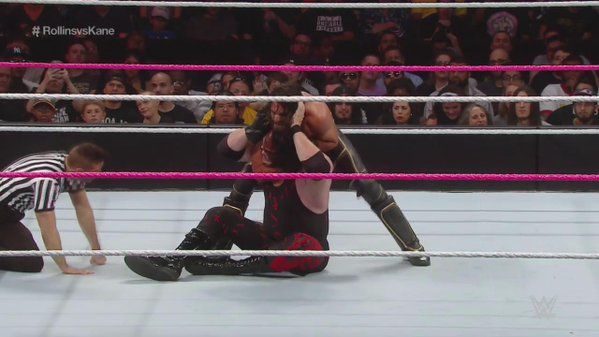 Up to the top and Superplex! Both are down. Match plods along. Seth eventually hits a pedigree on Kane and pins him clean to retain. Corporate Kane is now fired as well.
Winner: Rollins

Intercontinental Title
Kevin Owens (c) vs. Ryback
The brawling style begins straight away. They move to the floor to brawl. Back inside. Only goes about 5 minutes until Owens hits the popup powerbomb for the pin.
Winner: Owens 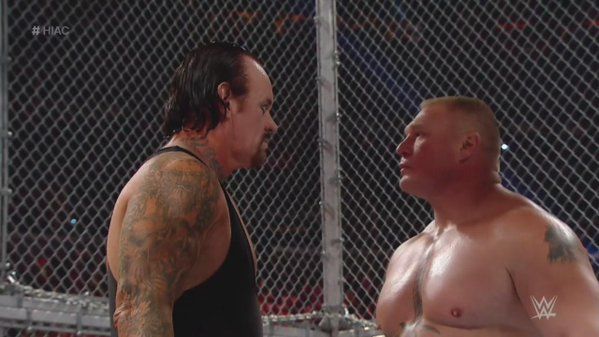 Hell in a Cell
Brock Lesnar w/Paul Heyman vs. The Undertaker
Lesnar comes out first to a big pop. Undertaker comes out to a full entrance. They both get into the ring and the match starts. Physical brawling as the crowd does dueling chants of Undertaker and Suplex City. They move to the floor and Lesnar sends Taker into the fence. Brawling continues and Taker tosses Brock into a ringpost, and Brock is busted open. Lesnar is gushing, a total crimson mask if you will. They move into the ring and Lesnar has a chair. He is really covered in blood. 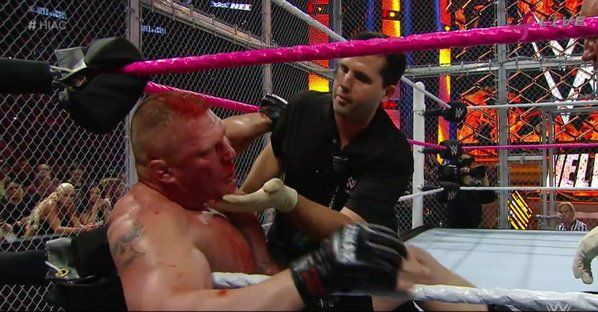 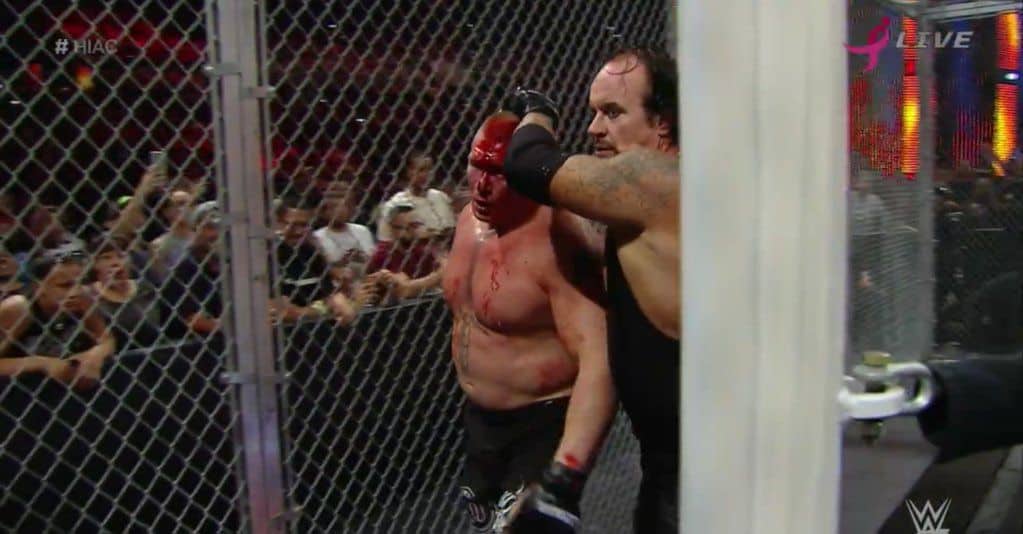 A doctor comes into the ring and Lesnar slumps into the corner to get checked out. Taker is selling on the floor. Lesnar back up after the doctor OK and attacks with the chair on the floor.

Back in the ring. Taker does a stunner of sorts sending Lesnar’s neck onto the top of a chair. Taker appears to also be bleeding. 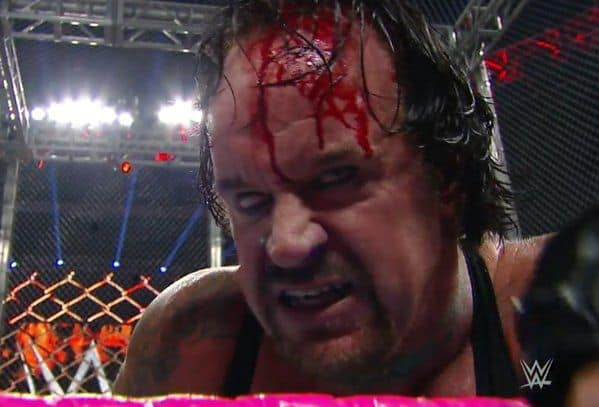 Lesnar hits a suplex. Taker back up and punches Lesnar but Brock turns it around into a German. And a third. Brock is dominating. F5. And another F5! Undertaker kicks out. Lesnar goes to the floor and grabs the STEEEEEEEEL steps. Bongs them into Undertaker’s head with a loud noise.

Covers but Taker kicks out. Lesnar goes to attack with the steps again but Taker knocks him back and the steps fall onto Lesnar as he falls. Taker locks in the Hells Gate. Lesnar is fading in the middle of the ring. Suddenly Lesnar pops up and pummeling Taker with strikes.

Taker is on his back and Lesnar starts going crazy and ripping up parts of the ring mat and padding. Undertaker sits up. Lesnar has exposed some of the boards under the mat. But Taker grabs Brock and hits a chokeslam on the exposed wood.

After the match, Paul Heyman and Brock Lesnar exit. The cage lifts and Undertaker is down for a while. Eventually he gets up and the crowd does a huge “Thank You Taker” chant and pops as he exits.

Suddenly the lights go dark, and the Wyatt Family music plays and all four members come down. They surround the ring then they attack the Undertaker. Crowd boos loudly. They pick up the Undertaker and drag him to the back as the show ends. No one made a save.