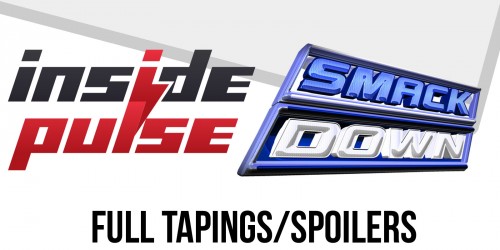 – Thanks to Jason and Shawnna Plymale for the following WWE SmackDown spoilers from tonight’s tapings in Milwaukee, Wisconsin:

* Miz TV with Sami Zayn and WWE Intercontinental Champion Kevin Owens opens the show. Sami is brought out first and he gets a big pop. Miz disrespects him and out comes Owens to interrupt. Neville comes down and interrupts with Words for Owens. They get into it and Miz attacks Sami, leading to a tag team match.

* Sami Zayn and Neville defeated The Miz and Kevin Owens. Owens was called in to fight Zayn but he wouldn’t, he walked out on the match. Miz took the pin from Zayn.

* Brie Bella defeated Summer Rae by submission. Lana was on commentary and attacked Brie after the match, hitting her with another Bella Buster.

* Chris Jericho comes out and cuts a great heel promo on AJ Styles and the fans that supported their tag team. Jericho lights fire to a Y2AJ t-shirt and lets it burn in a trash can. Jericho says Y2AJ is officially over. Good heat for Jericho here. AJ interrupts but The Ascension attacks him out of nowhere. Jericho retreats to the ramp while AJ clears the ring of The Ascension and stares Jericho down.

* The Wyatt Family vs. Dean Ambrose, Dolph Ziggler and The Usos is the main event. The babyfaces get the win and celebrate together after a really good match and fun show.