X-Men: Grand Design – Second Genesis #2 – As a kid, I joined the X-Men just after Rogue did, and it was her earliest issues that I first tracked down in back issue bins.  For that reason, the X-Men era portrayed in Ed Piskor’s latest oversized walk down nostalgia lane, is the one that I still think of as among the greatest of all time. This is when Chris Claremont was at his long-game plotting best, and this era was dominated by artists Paul Smith and John Romita Jr., as he found his first style.  Piskor’s loving condensing and retelling of these stories is great, although he gives Carol Danvers, who was suffering from the loss of her memories and would soon become Binary, an outsized role in things (you’d almost think there was some reason why Marvel would promote her more), and I thought his decision to have Scott Summers meet Madelyne Pryor earlier than he actually did, was interesting.  Maybe it’s just because I know these comics better that I’m more attuned to places where he deviates or retcons a little. I thought it was amusing that the Watcher’s inability to look into Limbo is the reason why we don’t have to revisit the Magik miniseries. I’m excited to see Piskor take us from the days of powerless Storm into the Outback with the next two-issue series, next year. These books are gold. 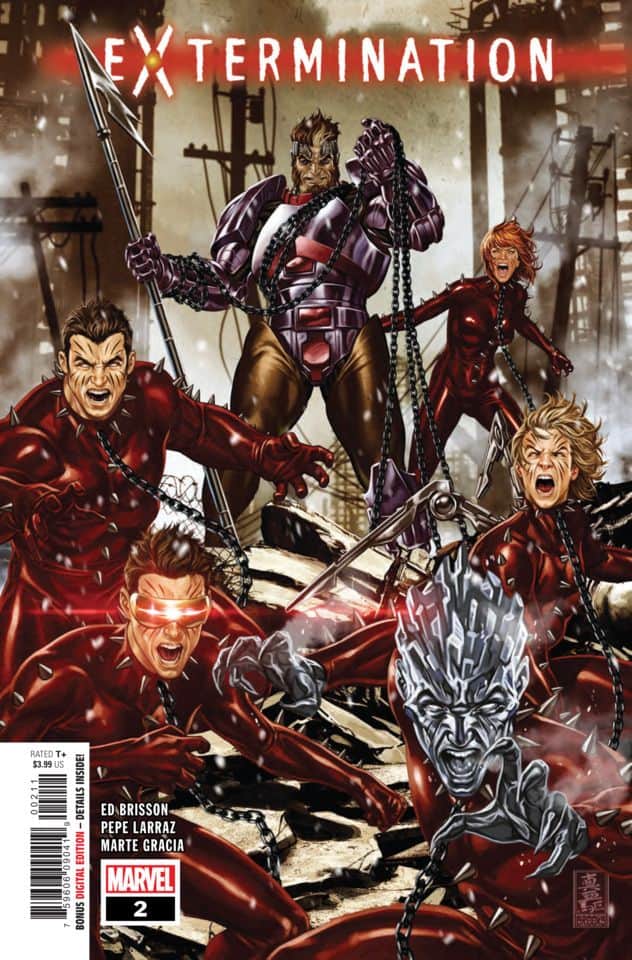 Extermination #2 – Ed Brisson is doing well with this X-Men event miniseries, as everyone tries to figure out why Ahab is after the original X-Men, without knowing that it’s really a younger version of one of their friends that has at least one of the Original Five.  Aside from a couple of questionable plot moments (just why, if all the adult X-Men are so keen on keeping an eye on the O5, would they not immediately notice that they are under attack just outside the school, especially with at least two psychics sitting around?). I like that Brisson is fixing a lot of problems that have cropped up since Bendis wrote the X-Men, and am curious to find out what role Mimic has to play in all this.

Harbinger Wars 2 #4 – I think that this summer, Valiant’s main event was a complete disappointment.  I think Livewire is a great character, but Matt Kindt never really established her motivation for attacking the world (or was it just the United States?), and didn’t even seem to fully understand her powerset in this issue, as she floats around in space arguing with X-O Manowar.  The various Psiots that Joshua Dysart did such a great job of developing are poorly utilized, as is Bloodshot, and I never really felt like I cared much about this story. I feel like Valiant is really slipping these days, and while I’m interested in the upcoming Livewire and Bloodshot series (mostly because of the writers attached to them), I find myself less and less enthused by their line.  Maybe it’s time to bring Dysart and Fred Van Lente back…

Marvel 2-In-One #9 – Ben and Johnny are in a bad place, stuck powerless and angry with one another in a distant dimension, but a common threat has a way of bringing out the best in people.  I haven’t read the start of the Fantastic Four series, and so don’t know how these two books fit together, but I cannot be happier with the character work that Chip Zdarsky has been doing on this book.  The last page really caught my attention (and my eye, thanks to the incredible Ramon Pérez). If Zdarsky were on the main FF book, I’d be reading it.

The New World #2 – I loved the first issue of The New World, Ales Kot and Tradd Moore’s new miniseries.  It was incredibly long and packed with detail. In contrast, this issue is much faster paced and regular sized, and moves the plot along a lot quicker.  Stella and her main rival Guardian have gone to execute Kirby, the boy who hacked Stella’s popular reality TV show, but also the boy who hooked up with her.  She has to decide if she wants to give up her career and rescue him, or finally accede to her grandfather’s wishes and kill him. Moore’s art is wild in this book, and while Kot is tossing a lot of ideas at us, it feels like he’s much more in control of the madness than he was a couple of years ago.

Submerged #2 – I’m really enjoying Vita Ayala’s The Wilds at Black Mask, but find that this series, about a woman who has descended to a subway station themed hellscape while looking for her brother as Hurricane Sandy arrives, lacks the nuance and scope of that other series.  I do like Ayala’s character work in this issue, as a wraith forces the main character to relive moments that signify the quality of her relationship with her mother, but found that the whole project feels a little stiff, and in need of some more guidance or focus.

West Coast Avengers #1 – It was a small week so I decided to pick this up.  I found it to be charming, and featuring some characters I really like (both Hawkeyes, America Chavez, Quentin Quire), although the inclusion of Gwenpool was irritating.  Stefano Caselli’s art is great, and for the most part I enjoyed Kelly Thompson’s writing. I was thinking that this book isn’t going to age particularly well, as Thompson is very slang-dependent in her writing.  I’m curious to see where this book goes, because I’d be down for a fun team book.

X-O Manowar #18 – The Roman era Barbarians arc ends with a naval battle in the middle of the Coliseum, which seems a little historically inaccurate.  I am done with stories set in Aric’s past, even if this one does help to introduce a new character that will be seeing him again soon in the present.

Comics I Would Have Bought If Comics Weren’t So Expensive:

Star Wars Lando Double or Nothing #4 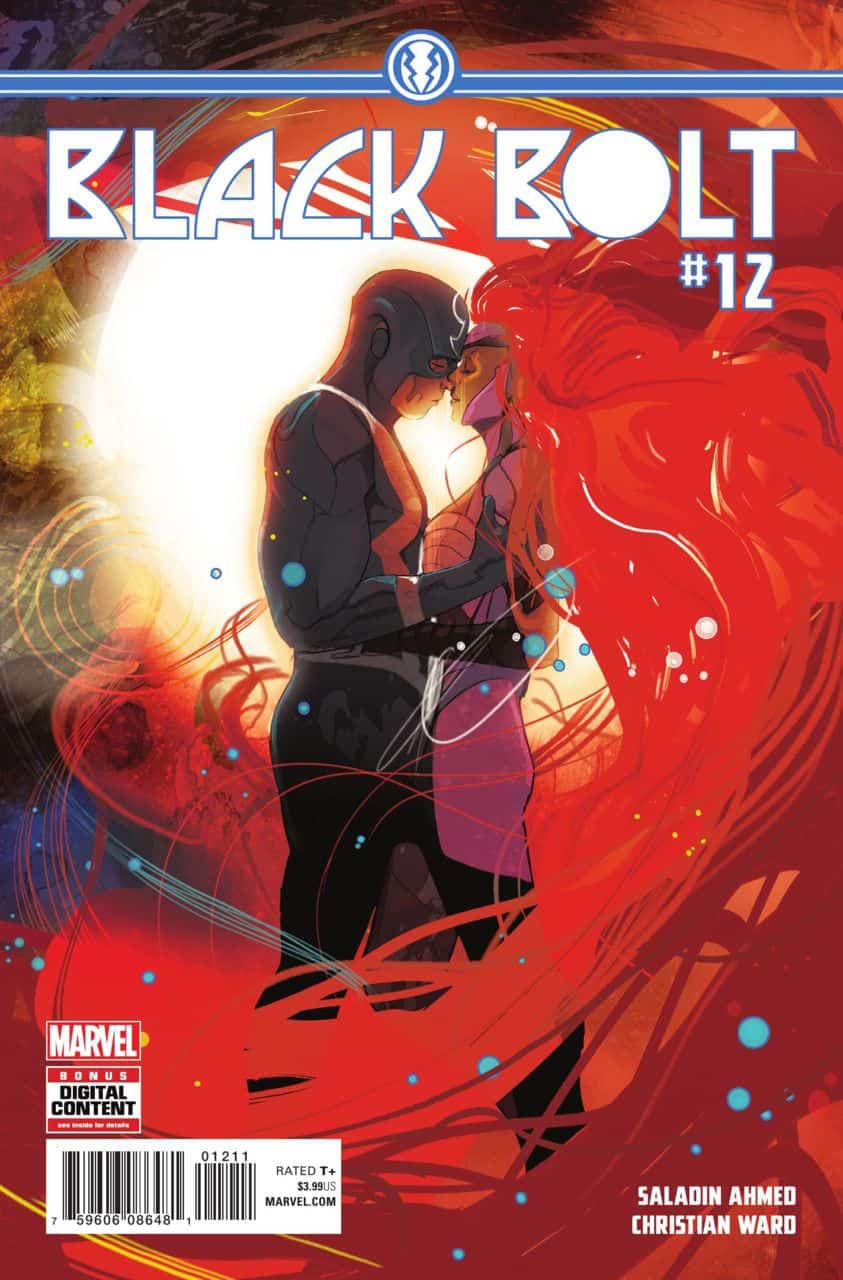 Black Bolt #12 – I really enjoyed the work that Saladin Ahmed and Christian Ward put into this series, which managed the almost impossible task of making Black Bolt interesting.  At the end of the day though, what really drew me to this book is that it probably tells the best Absorbing Man story of all time.

The Mighty Thor #706 – The end of Jane Foster’s time as Thor is exceedingly lovely.  I think Jason Aaron and Russell Dauterman should be commended for doing something very original with Thor, and making Jane Thor such a likeable character.  I’m sad that she’s not going to wield the hammer anymore, and that Dauterman is not on a regular title anymore (which won’t last long, as he’s incredible). This issue hit all the right emotional notes, and wrapped up Jane’s story very well.

The Mighty Thor: At The Gates of Valhalla #1 – This one-shot that bridges The Mighty Thor and Thor doesn’t serve a lot of purpose other than to remind the reader that Jason Aaron likes to jump up to the distant future as often as possible (when not travelling to the distant past), and that his Malekith and the War of the Realms storyline has been running for ages.  Hilary Bartel and Ramon Pérez are both amazing here, but this is not really the reflection on Jane Thor that it appeared to be at first glance.

Thor #1 – Jason Aaron has been writing Thor for years, and across at least four titles.  This latest relaunch feels like a bit of a mistake, when compared to the highs of the last two series, which featured Jane Thor.  Regular old Thor is looking for a new hammer, and having some trouble with it, while also generally failing as a hero and as a god.  Time to bring Loki back, and for good measure, to throw in yet another story featuring Hella Old Thor and his granddaughters, set at the end of time.  It all feels like it’s just the same old thing again, and that’s kind of boring. Mike Del Mundo is a great artist, but this doesn’t really fit with his strengths.  I feel much the same about the backup, which features the most subdued Christian Ward I’ve ever seen. I think Marvel, in its rush to pander to the fans that insist that the status quo return, has made a misstep here.

The Wild Storm #15 – This series is very good, but at the same time, each issue is very much the same as the preceding one.  Warren Ellis has found a groove for this title, and he just stays in it. If you like espionage/superhuman/alien rivalry stories, you’d like this.

God Country – I can’t think of any other writer who is as hot as Donny Cates right now; it seems that he’s become Marvel’s new golden boy.  God Country is not his first book, but it was where the buzz around Cates really began to grow. It’s understandable – this book, about an older man suffering from dementia who ends up holding the massive god of swords, being cured, and then getting involved in some great cosmic stuff, is very well-written.  Cates focuses the story on what this man’s family is going through, to the point where the cosmic stuff doesn’t seem as essential, while it still drives the plot. I was reminded a lot of Scott Snyder’s work, which often seems to revolve around the relationships between fathers and sons, but the book still feels unique and like it is its own thing.  The artist, Geoff Shaw, does a great job of blending a Kirby-esque godscape with rural Texas. This is interesting stuff, and I’m looking forward to Cates’s inevitable return to Image after making his name at Marvel (that’s how it works now, right?).

Witchfinder Vol. 4: City of the Dead – I’ve really fallen off on Mignola-verse, and I often find myself trying to figure out why.  I find that the stories bore me now, especially since John Arcudi left. I mostly avoid these titles now, but I really liked the previous Witchfinder story, set in Unland.  That one was not written by Mignola at all, but I still thought that I enjoyed Edward Grey’s character enough to give this story a go. It really didn’t work for me though, as it seems that Mignola is as interested in dropping Easter eggs and nods to other stories in this shared universe as he is in telling a compelling story.  Also, I found Grey to read as a pretty generic character in this story, betraying little to no sign of personality. Ben Stenbeck’s art, as always, is very nice, but not much here stayed with me.