A rundown of last week’s biggest events airs before Tessa Blanchard comes down to face Faby Apache. These two are completely different acts – and the contrast works reasonably well. Tessa lands a super codebreaker for 2.5. Tessa avoids a lariat and hits the hammerlock DDT to end it. Tessa gets on the mic and says she’s the best athlete and wrestler in pro wrestling. Taya gets on the big screen and says she was a two time AAA Women’s Champion and she’s tired of Tessa’s big mouth. Taya wants a shot at BFG. Eddie and Alisha argue, and this is just terrible because it requires Alisha to act and it isn’t like Eddie is the greatest promo on Earth either. Johnny Impact talks about wanting to team with Eddie tonight to take out Moose and Aries. 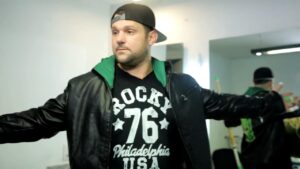 OVE vs. Cage and the Lucha Bros. is hyped up for BFG and Sami talks about causing BFG to sell out. Sami says that tonight, he’ll gave Jake the Mini-Draw the chance to become the Medium Draw by beating Brian Cage tonight. Eli walks around Mexico and finding out he’s got Mexican blood in him and challenges any luchador next week. Crist vs. Cage begins with a tornado DDT on the floor by Crist. A rana backfires as Cage just hoists him up with a Rampage bomb. Sitout Alabama slam hits for 2 and an avalanche cutter gets 1 for Crist. Drill Claw gets the win for Cage before a post-match beatdown. The lights go out and the Lucha Bros destroy Dave Crist with sticks before Cage chases off Jake and Sami with a flip dive that sorta misses.

Aries talks about beating Texano last week and now, he’ll see Kross team with Moose to beat Impact and Edwards. Moose cuts a very dry promo before Kross is all intense and movie monster scary before calling Johnny Impact Johnny Neckbrace. Daniels and AJ vs. LAX in a cage is the GWN match of the week. Katarina tells Grado that she’s missed him and Joe tells her Access Denied. Katarina threatens them with Murder Clown, who will face Joe next week. Rolando Martinez is with Scarlett, who talks about making a mid-carder almost win a title and issues a global talent search.

The Desi Hit Squad comes out to face LAX, who wins quickly with the Street Sweeper. King talks about the legends of Mexico and showing a photo of Konnan all young. He says that Konnan was THE man, but that day is long gone. He says that Konnan lost his legacy when he lost the mask, and he leeched off Eddie Guerrero, Art Barr, and Rey today alongside the new LAX. They burn the Konnan mask and we go to Bahh reading a bedtime story to KM, who falls asleep and Bahh puts his robe on him. KM tells Bahh to get revenge and he goes to do so. Tessa talks about Taya disappearing when she showed up and all she wants to do is steal her thunder.

Allie and Kiera Hogan face Su Yung and an Undead Bridesmaid. Josh talks about Conda.com and he asks Don if he orders custom pens and Don says he uses them for custom snugglies to watch Impact. Kiera wins with a fisherman suplex to the bridesmaid amid this endless plug for BFG’s sponsor. Swann tells Sydal to open his eyes and tells him he’d done with yoga and meditation – it’s time to kick ass. Kross and Johnny start things off with Kross bullying him around. Eddie lands a super rana on Moose for 2. Moose and Eddie exchange big kicks before Aries threatens a belt shot and Johnny grabs it and bonks him. Eddie kendo stick shots Eddie, but Moose’s spear ends it.