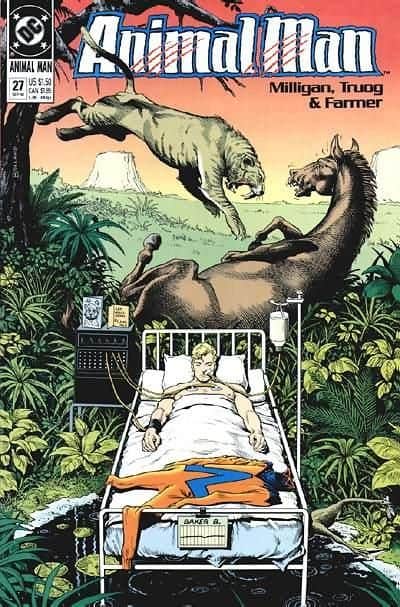 After Grant Morrison left Animal Man, I dropped the book.  I saw that Peter Milligan was coming onboard as the new writer, and I just wasn’t interested.  I’m not sure why – at the time I was becoming aware of just how good his Shade the Changing Man was, and hadn’t yet been burned by some of his more mainstream work.  I think I just didn’t have the cash at the time, and then had never heard enough good stuff about the book to make me change my mind.

Recently, I picked up this whole run for a very low price, and figured it was worth getting for the Brian Bolland covers alone.  So, after a strange and boundary-pushing run like Grant Morrison’s, what should the follow-up writer do? Take the book in a new direction?  Double down on the stuff the previous writer was doing, and make things even weirder? Acknowledge the fact that an up-and-coming comics writer appeared in his own series, or just ignore it?  I don’t know what Milligan did, and now we can find out together… 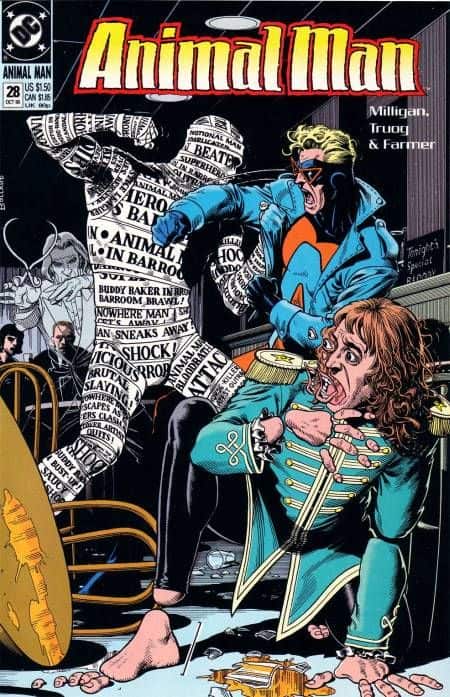 I think my initial instincts, which told me not to get this run when it came out, were right.  By the end, this wasn’t a terrible set of comics, but it was pretty weird, annoying, and unnecessary.  Just after Grant Morrison took Buddy’s family away from him, it’s weird that the next writer would essentially do the same thing, but with a twist on it.

These comics did not come with a “suggested for mature readers” tag, yet they were so very different from anything else on the stands.  I think that the freedom Milligan was given in writing this run went to his head, as he decided to pepper Nowhere Man’s speech with innuendo, and generally write a mature comic that centred on confusing physics.  The thing is, as he was trying to find ways to weird it all up, he wasn’t taking the time to make sure that the storytelling was compelling. More than once it felt like he was trying to duplicate the cool stuff that Grant Morrison was doing in Doom Patrol, only without the guiding principles and character work that made that book so much more effective. 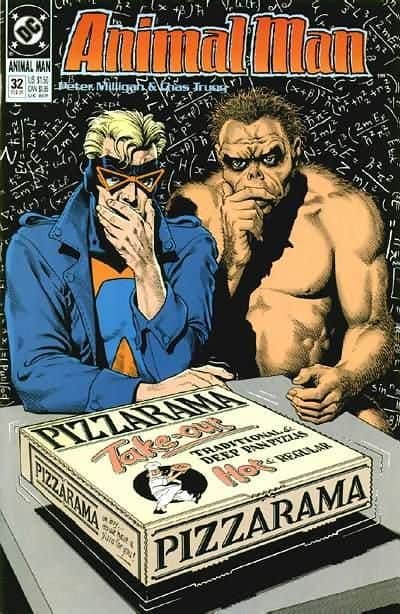 Milligan is the first writer to suggest that there’s more to Maxine than meets the eye, as she’s the one who first recognizes that Buddy has changed, and she is the only other person who can see the jungle in the bathroom.  Later writers built on that.

Truog’s art looks really dated in this run.  Buddy appears to be wearing Zubaz for a few issues, and his mullet looks even more mullet-ty after he emerges from the jungle.  When Truog inked himself on his last issue, his work got a lot more wild. I think it’s also worth acknowledging (which I didn’t do in my last column) that Tatjana Wood coloured every issue of this series to that point, which feels a little remarkable.  Also remarkable is the continued run of Brian Bolland’s thoughtful and bizarre covers.

When Milligan left after just six issues, I jumped back onto the book, excited by Steve Dillon’s clean artwork and the new direction that Tom Veitch took the series.  We’ll talk about that next time.