Bela Lugosi rose to attention with Dracula in 1931, but he held back from putting on the cape and fangs for a while as he tried to scare audiences in other roles. But in 1943, he returns from the grave with The Return of the Vampire for Columbia. How does he come back? Blame it on the Nazis. The film was a hit even though Bela wasn’t really playing Dracula. He’d return to that role a few years later in Abbott and Costello Meet Frankenstein. Now The Return of the Vampire is coming to Blu-ray so you can see his fangs in a high resolution. They even include the silent 8mm version that was sold to folks who wanted to watch it at home. Here’s the press release from Scream Factory that includes all the bonus features: 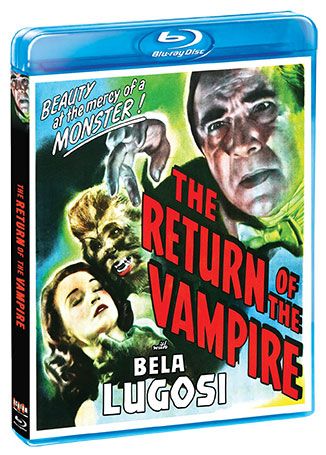 In 1918, Armand Tesla (Bela Lugosi), a 200-year-old Hungarian Vampire, prowls the English countryside, feeding from the jugulars of the villagers. But Tesla’s reign of terror is interrupted when a pair of scientists, Lady Jane and Sir John Ainsley, drive a railroad spike through his heart. The “un-dead” Tesla remains safely entombed for two decades until the impact from a stray Nazi bomb accidentally releases him. Along with his werewolf servant Andreas Obry, the resurrected vampire now plots vengeance on the family that put a halt to his nocturnal feasting. On February 19, 2019, SCREAM FACTORY™ is proud to present Bela Lugosi’s cult classic THE RETURN OF THE VAMPIRE on Blu-ray. Directed by Lew Landers (The Raven), this blood-curdling horror classic stars Bela Lugosi (Dracula), Frieda Inescort (A Place in the Sun), Nina Foch (Spartacus), and Miles Manders (The Man in the Iron Mask). A must-have for movie collectors and loyal fans of Bela Lugosi, this definitive Blu-ray release contains new audio commentaries by film historians, special features and more! Pre-order is available now at ShoutFactory.com.

Tags: Bela Lugosi, Scream Factory, The Return of the Vampire