There was a time in the ’90s when Ian Hart was John Lennon. First he gave an amazing performance as Lennon in The Hours and The Times about the Beatle going on a vacation with manager Brian Epstein to Barcelona. It was a non-musical performance indie film. Then he came back color with a guitar for Backbeat. This is the story of the Beatles in Hamburg during the time when Pete Best was the drummer and Stu Sutcliffe was the first “fifth Beatle” that actually played with them. Backbeat focuses on a joyful time for Stu that ended sadly. This is an excellent rock biopic since it defies the usual secret of my musical success formula. The movie is getting released as part of the Shout Select line that brings attention to films that don’t get as much play on cable as they should. Here’s the press release from Shout! Factory that includes the bonus features: 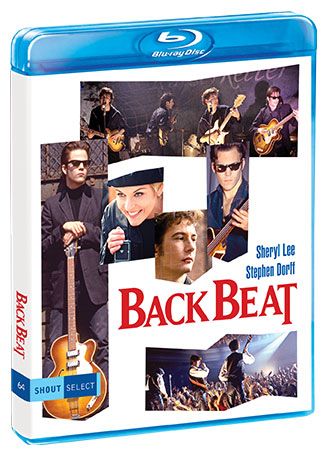 Before anyone had ever heard of The Beatles, there was a group of five playing clubs in Hamburg, Germany. They were raw and irreverent. Now, the story of Stuart Sutcliffe, the “fifth Beatle,” can be told – better than ever! On February 19, 2019, Shout! Select will release BACKBEAT, directed by Iain Softley, on Blu-ray. This enthralling story about the pre-fame Beatles contains special features. Pre-order is available now at ShoutFactory.com

From the director of K-PAX, Hackers, and Skeleton Key, and starring Sheryl Lee (Twin Peaks), Stephen Dorff (Blade, Cold Creek Manor), and Ian Hart (Harry Potter and the Sorcerer’s Stone) BACKBEAT is an energetic musical drama chronicling the pre-fame Beatles as they head to Hamburg in search of success. As they gain popularity, the “fifth Beatle,” bass guitarist Stuart Sutcliffe (Stephen Dorff), falls in love and ultimately must choose between his best friend John Lennon (Ian Hart), his new love Astrid Kirchherr (Sheryl Lee) – and the greatest rock-and-roll band in the world.
﻿
Winner of the London Film Critics Circle’s British Newcomer of the Year Award and a British Academy of Film and Television Arts (BAFTA) Award for Best Film Music, the 1993 film features a soundtrack that includes music from Dave Grohl (Foo Fighters), David Pirner (Soul Asylum) and Mike Mills (R.E.M.)