Back in the 1970s, there was a TV show called Project U.F.O. that was supposed to be based on the Air Force’s Project Blue Book. That was a team of officers who roamed around the country investigating what they believed were alien sightings by others. The show (produced by Dragnet‘s Jack Webb) was must see for the two half seasons it lasted. Except revisiting it decades later was a painful experience. The show was so laggy without much tension. It was pretty much an episode of Dragnet with aliens instead of angry people in Los Angeles. When History Channel announced they were coming out with Project Blue Book, I was hesitant until I saw Aidan Gillen was part of the cast. Ever since I saw him on the original Queer As Folk, I’ve trusted that he’s going to keep things entertaining. He’s done it on The Wire and Game of Thrones. Now he’s the scientist teamed up with an Air Force officer figuring out if people are really experiencing close encounters or huffing swamp gas. There’s quite a bit of action, alien encounters and paranoia. This is what I wanted to see in the previous ’70s series. Now the first season is slated to come out in April. Here’s the press release from Lionsgate: 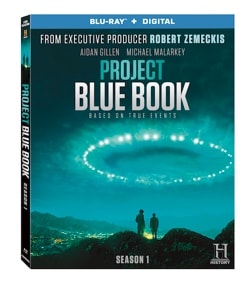 HISTORY®’s highly anticipated top-secret drama series from Academy Award®-winning executive producer Robert Zemeckis (1994, Best Director, Forrest Gump; also known for the Back to the Future franchise and Contact) comes home when Project Blue Book: Season 1 arrives on Blu-ray™ (plus Digital) and DVD April 9 from Lionsgate. This new series is based on true top-secret investigations into unidentified flying objects (UFOs) and stars Aidan Gillen and Michael Malarkey, along with Neal McDonough, Michael Harney, Laura Mennell, and Ksenia Solo. Hailed as one of “the 10 most anticipated new shows of 2019” (Dana Feldman, Forbes), the Project Blue Book: Season 1 Blu-ray and DVD will be available for the suggested retail price of $29.99 and $24.98, respectively.

From Academy Award® winner Robert Zemeckis, Project Blue Book is inspired by the real-life experiences of Dr. J. Allen Hynek (Aidan Gillen). A brilliant college professor, Hynek is recruited by the U.S. Air Force to spearhead a clandestine operation, code-named Project Blue Book, which investigates UFO sightings and alleged extraterrestrial encounters. Each episode draws from those actual case files, blending UFO theories with authentic historical events from one of the most mysterious eras in United States history. Throughout the season, documented occurrences will be explored, including the Gorman Dogfight of Fargo, North Dakota; the Flatwoods Monster incident of Flatwoods, West Virginia; and the Lubbock Lights of Lubbock, Texas, as well as many others. Project Blue Book ultimately investigated more than 12,000 UFO cases, over 700 of which remain unsolved to this day. By delving into the origins of fake news, espionage, and government cover-ups, Project Blue Book: Season 1 straddles the world of science and the exploration of the unknown, exposing an incredible mystery that continues to persist.

Michael Malarkey TV’s “The Vampire Diaries” and “The Oath”

Laura Mennell TV’s “The Man in the High Castle,” Watchmen