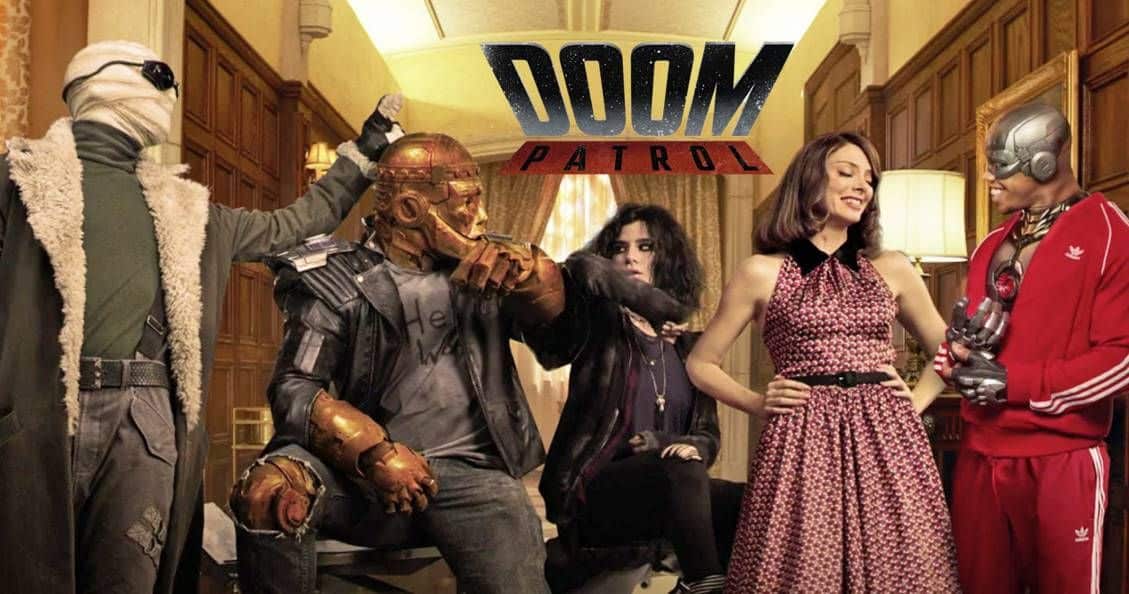 Welcome to the Column where I talk about the new Dc Universe show Doom patrol.

Doom Patrol is a very obscure DC Comics team which is getting their own DC TV show for the first time.

Viewers may recognize most of them from the Titans Season 1 episode that showed some major members of the group.

Doom Patrol is mostly connected to DC hero Beast Boy and that is their biggest connection to a wide range of the DC Universe.

The synopsis reads as follows.

A re-imagining of one of DC’s most beloved group of outcast Super Heroes: Robot man, Negative Man, Elasti-Woman and Crazy Jane, led by modern-day mad scientist Dr. Niles Caulder (The Chief). The Doom Patrol’s members each suffered horrible accidents that gave them superhuman abilities – but also left them scarred and disfigured. Traumatized and downtrodden, the team found purpose through The Chief, who brought them together to investigate the weirdest phenomena in existence – and to protect Earth from what they find. Part support group, part Super Hero team, the Doom Patrol is a band of super-powered freaks who fight for a world that wants nothing to do with them. Picking up after the events of Titans, Doom Patrol will find these reluctant heroes in a place they never expected to be, called to action by none other than Cyborg, who comes to them with a mission hard to refuse, but with a warning that is hard to ignore: their lives will never, ever be the same.

Rita Farr is a shapeshifter, rendered fragile by years in a mental health institution. She spends most of her time in her room as a glowing, fleshy lump, as it takes extraordinary effort to maintain her human form. She isn’t averse to outsiders and likes to maintain an air of grace and old-school femininity.

Then we have Negative Man, Crazy Jane and Robot Man rounding up the rest of the team

The Chief seems to be the man who is going to solve as many problems as he creates the Doom Patrol for reasons of his own.

Male, 40s-50s, open ethnicity. Eccentric, brilliant, paternal, and mysterious. The Chief is a noted scientist, wealthy investor and, of course, leader of The Doom Patrol. The Chief rescued each member of his team from horrific accidents, nurtured them to health, resuscitated their self-esteem and sent them into the world to defend a populace that sees them as little more than freaks. His disarming manner does little to conceal a steely determination and unwavering devotion to defending Earth from Evil’s oddest entities.

In a curious decision, this time Beast Boy isn’t the only titan who has a connection with the team. It is fellow hero, Cyborg who is joining the doom patrol for the first time.

Cyborg is someone that DC has tried to push with the Justice League despite all his best moments with the Titans. With him joining the Doom Patrol, I can only hope that it is just an inevitability before he joins titans.

Male, mid-20s, African-American. Charming, sarcastic, a bit brash, Cyborg is half-human, half-machine — the ultimate Super Hero for the digital age. At least, that’s how it appears. Vic Stone lost his mother at a young age, lost his promising future to a horrific accident and was put back together as a man-machine hybrid by a brilliant and aloof father who sees him as little more than a lab rat. While Vic may be connected to every computer on Earth, he struggles to maintain the connections that make us human. Desperate to gain acceptance from the outside world and his father, Vic uses his powers to try and harness the curse of his cybernetic body for good.

ASP SERIES REGULAR. May segue into series regular on TITANS in subsequent seasons.

I look forward to watching this show. It seems to be something different. The cast seems to be perfectly cast and from what we have seen of them, they all seem quite interesting and full of so much personality.

If they could establish that within an episode of another show, imagine how much they could do with a full season. The dark tone would suit them much more than it ever will for titans.

The Doom Patrol is a bunch of freaks who try to pretend they are a family. They try to be heroes but often, they have always been overshadowed.

I am quite excited for this new offering from the dc universe and hope it has a successful run.