Spider-Man: Into The Spider-Verse Blu-ray Announcement

In a year that gave us Black Panther, the end of the Avengers(?), Jason Mamoa as a “fishman,” the best superhero movie of 2018 turned out to be animated. Spider-Man: Into the Spider-Verse arrived last December and combined the origin story of Miles Morales becoming the famed web-slinger with eye-popping visuals. From the minds that gave us Cloudy with a Chance of Meatballs and The Lego Movie, this latest rendition of the Spider-Man character was a much-need diversion than the traditional Marvel Studios titles and whatever Warner Bros. and DC Comics has given us the last few years – with the exception of Wonder Woman.

Now Sony Pictures Home Entertainment is readying Spider-Man: Into the Spider-Verse for home release, announcing that it will be available for digital purchase beginning February 26 with home video releases in 4K UHD, Blu-ray and DVD to follow on March 19. According to the press release, Into the Spider-Verse will have over 90 minutes of special features including an animated “Spider-Ham” short, which can be previewed below.

The Academy Award-nominated Spider-Man: Into the Spider-Verse introduces Brooklyn teen Miles Morales, and the limitless possibilities of the Spider-Verse, where more than one can wear the iconic mask. “One of the most rewarding experiences in recent months has been to hear that children are telling their parents that they see themselves in Miles, or that they want to grow up to be like Spider-Gwen, anyone can be a hero. Thats why we made this film, and we hope that feeling of empowerment is something that both audiences young and old can take away,” say Directors Bob Persichetti, Peter Ramsey, and Rodney Rothman.

Packed with special features, besides the “Spider-Ham” short is the Alternate Universe Mode where fans can view the film in an entirely new way to discover alternate scenes, plotlines, characters, and more with the filmmakers as their guide. There’s also The Spider-Verse Super-Fan Easter Egg Challenge, where fans are challenged to find every single Easter Egg hidden within the Spider-Verse (and there are a lot of them!). 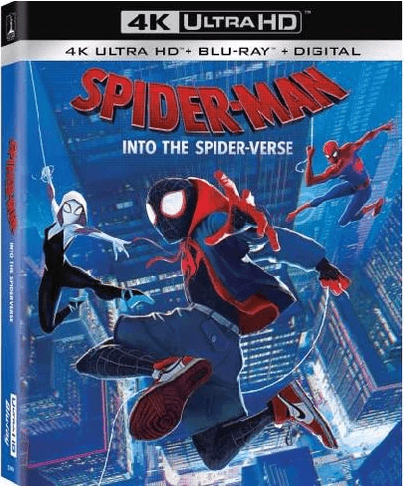 We Are Spider-Man: Exploring and celebrating one of the key themes of the film, We Are Spider-Man takes a deep dive into the diversity of the characters and aspirational core that any person from any gender or cultural background can wear the mask.

Spider-Verse: A New Dimension: With a stunning visual style and state of the art animation designed to take the viewer into the pages of a comic, Spider-Man: Into The Spider-Verse is not only a love letter to comic books but a groundbreaking take on the super hero genre. Hear from the artists and filmmakers who pushed the boundaries of the artform as they discuss their journey.

The Ultimate Comics Cast: Enjoy this showcase of all of the fan favorite characters featured in the Spider-Verse and the spectacular cast who were chosen to bring them to life.

A Tribute to Stan Lee & Steve Ditko: Celebrate the amazing legacy and powerful spirit of the creators of Spider-Man.

Designing Cinematic Comics Characters: A breakdown of all aspects of the character design including costume, movement in animation, and distinct powers for each character.

Heroes & Hams: Meet the amazing Spider-people of the Spider-Verse.

Scorpions and Scoundrels: Explore the classic villains who wreak havoc on the Spider-Verse.

Alternate Universe Mode: In this all-new viewing experience, discover alternate scenes, plotlines, characters, and more with the filmmakers as your guide.

All-New Original Short “Spider-Ham: Caught In a Ham” It’s another normal day for Peter Porker, a.k.a. the Spectacular Spider-Ham, fighting bad guys and loving hot dogs, until a mysterious portal starts messing with the very fabric of his cartoon reality.