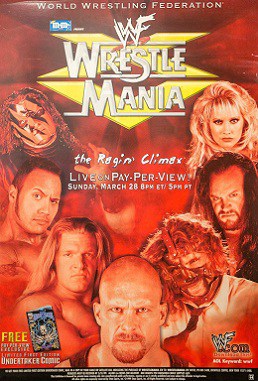 ~MATCH #1~
Hardcore Holly defeats Al Snow and Hardcore Champion Billy Gunn at 7:06 in a Triple Threat match to win the title. Gunn has been the Champion since 3.15.99, and this is his third defense. Everyone brawls to start, as it’s every man for himself. It doesn’t take long for various weapons to get involved. Everybody gets a chance to inflict some pain on their opponents. Snow even uses Head to his advantage. Gunn fights back and hits Snow with the Fame-Ass-Er on a chair and he covers. Holly breaks that up with a chair shot of his own, and he steals the pin on Snow to regain the title. Typical hardcore nonsense here.
Rating: *½

~MATCH #2~
World Tag Team Champions Owen Hart & Jeff Jarrett (w/ Debra) defeat Test & D-Lo Brown (w/ Ivory) at 3:58 to retain the titles. Owen and Jarrett have been the Champs since 1.25.99, and this is their sixth defense. Test and D-Lo were the last two standing in a battle royal earlier tonight on Heat. That’s how hard up they were for credible tag teams despite their giant roster. Test is out here doing powerbombs 60 seconds into the match. The champs take over early on and isolate D-Lo in their half of the ring. Debra tries to interfere, but Ivory thwarts that. D-Lo sets up a powerbomb on Jarrett, but Owen comes off the top rope with a missile dropkick, and Jarrett jackknife cradles D-Lo to get the pin. Meanwhile, Terri Runnels and Jacqueline are arguing with Ivory, and Test tries to butt in, and thus isn’t there to save his partner. This was spirited, but pointless.
Rating: **

~MATCH #3~
Butterbean (w/ Art Gore, Donny Dold, and Manny Sutherland) defeats Bart Gunn (w/ John Lotharo & Ray Rinaldi) by KO at 0:35 in Round 1 of a Brawl 4 All Match. Vinny Pazienza is the Special Referee. Bart is immediately completely overmatched and get destroyed in short order. This was epic.
Rating: *****

~MATCH #4~
Mankind defeats Paul Wight by disqualification at 6:50 to earn the right to Special Referee tonight’s main event. This is a brawl from the get-go, and they fight both in and out of the ring. Show uses his immense size and power to throw Mankind around and generally dominate hm. Mankind fights back and puts on the Mandible Claw, climbing on Show’s back to get a better angle. Show powers up and falls backward, with his legs fully in the air, crushing Mankind underneath him. That was sick. They fight outside the ring some more, and Show uses a steel chair right in front of referee Earl Hebner, who is allowing a lot of leeway. Show brings two chairs in the ring and delivers a vicious Chokeslam, and Hebner calls for the disqualification. Lame match with a few memorable spots, and a crap finish.
Rating: *¼

Vince McMahon comes out to yell at Show for being so reckless. He asks Show what he was doing, and makes sure to add, “I don’t care about him, but what are you doing?” Little things like that are why Vince is the greatest heel of all-time. Vince gets too up in Show’s face, and he takes a knockout punch for his troubles. Backstage, Vince declares that he wants Show arrested.

~MATCH #5~
Intercontinental Champion Road Dogg defeats Goldust (w/ Ryan Shamrock & The Blue Meanie), Ken Shamrock, and Val Venis in a Four-Way Elimination Match to retain the title at 9:47. Road Dogg has been the Champion since 3.15.99, and this is his third defense. It’s a messy brawl to start, with everyone getting a chance to do some stuff. Venis and Shamrock end up fighting outside the ring and they get each other counted out brawling to the back. That’s stupid of them. Shamrock is pissed so he hits Goldust and Road Dogg with the Belly-To-Belly Suplex on his way out. Interference from Ryan backfires and Road Dogg counters a bodyslam with an inside cradle (sort of) to get the pin. This was just terrible, with no rhyme or reason to any of it and a sloppily executed finish.
Rating: ¾*

~MATCH #6~
Kane defeats Triple H by disqualification at 11:33. HHH attacks right away and they fight in and out of the ring. Not much of note happens here. They go back and forth, Kane working a slow pace and keeping HHH on the ground. HHH tries to speed things up. Late in the match, Chyna makes her way down and puts the steel stairs in the ring. That backfires when HHH hits a drop toe hold, sending Kane face-first into the stairs. Kane fights back and flattens HHH with a Chokeslam. Chyna gets in the ring and double-crosses Kane, hitting him with a steel chair for the disqualification. HHH then destroys Kane with the chair and hits a Pedigree on top of the chair. Chyna and HHH embrace to the delight of the crowd. The match was brutal, by the way. Thanks for asking. Also, the finish sucked.
Rating: ½*

~MATCH #7~
Women’s Champion Sable defeats Tori at 5:06 to retain the title. Sable has been the Champion since 11.15.98, and this is her second defense. This match has very few moves that don’t look awkward or botched in some way. Late in the match, the referee gets bumped. Nicole Bass makes her way in from the crowd and drops Tori with a press-slam. Sable hits the Sable Bomb to get the pin. This was embarrassingly bad.
Rating: ¼*

~MATCH #8~
European Champion Shane McMahon (w/ Test) defeats X-Pac at 8:41 to retain the title. Shane has been the Champion since 2.15.99, and this is his second defense. Pat Patterson and Gerald Brisco try to attack X-Pac during his entrance, but they get beat down. The Mean Street Posse crew is watching on from ringside. Shane cheats like crazy, and Test gets involved as quickly and as frequently as possible. The referee is very lenient with the rules in this one. Test gets right in the ring, so Triple H and Chyna make their way down to even the odds. It’s all a ruse though, as Chyna distracts the referee and HHH hits X-Pac with a Pedigree and puts Shane on top to get the pin. This was silly fun, the action rarely slowed down, and Shane McMahon matches should have some element of gaga to them because he’s not a real wrestler and never has been.
Rating: **½

HHH and Test continue to assault X-Pac, so Road Dogg and Billy Gunn come out 11to make the save. The lights go out and Kane’s music hits, and Kane runs the Corporation off as the Outlaws check on X-Pac.

~MATCH #9~
The Undertaker (w/ Paul Bearer) defeats Big Boss Man at 9:46 in a Hell in a Cell Match. Boss Man attacks right away in this odd, rare heel versus heel matchup. Undertaker strikes back with a series of right hands. Boss Man hits a swinging neckbreaker for two. Undertaker doesn’t think much of that and they go to the floor. He throws Boss Man into the cell wall. Boss Man then reverses a whip and sends Undertaker into the wall. He finds a pair of handcuffs and punches Undertaker in the face with them. Boss Man cuffs Undertaker to the cell and finds a nightstick to abuse him with. As Undertaker falls down the handcuffs snap. Oops. Undertaker fights back and is slightly bleeding from the forehead. He hits Boss Man with a chair. Back in the ring Undertaker hits the flying clothesline. Undertaker goes for Old School, but Boss Man kicks the top rope to knock him down, and then Boss Man shoves him into the cell wall. Back in the ring they trade punches and Undertaker lands one to the nuts. Undertaker goes for the Tombstone, but Boss Man slips out. Boss Man whips Undertaker into the corner and tries a clothesline but misses. Undertaker hits the Tombstone to get the pin. That was dull and not at all engaging. This was the opposite of Undertaker’s zenith as a worker, and by far the worst Hell in a Cell match of all-time.
Rating: *

~MATCH #10~
Steve Austin defeats WWF Champion The Rock in a No Disqualification Match at 16:52 to win the title. Rock has been the Champion since 2.15.99, and this is his third defense. Austin forgot his vest, or it got lost or something, so he’s just wearing a t-shirt to the ring. They start throwing punches and almost immediately go to the floor. They fight into the crowd and the Philadelphia fans are hot for it. They fight up by the entrance ramp and Rock backdrops Austin, who lands hard on his knee on part of the set. He recovers though and kicks Rock square in the dick. But since Mr. McMahon made this a no-holds-barred match, everything they’ve been doing to each other is legal. Austin goes for a suplex on the floor but Rock reverses it. Rock takes a water break and spits some of it in Austin’s face. Austin recovers and drops Rock across the guardrail, then hits an elbow on the Spanish Announce Table, which doesn’t break. Austin hits another elbow to this time break the table and then gives Rock a receipt for his water. Rock makes a brief comeback, but Austin is soon back on the attack. Back in the ring Rock hits a Rock Bottom and Austin kicks out. Rock brings a chair into the ring, but Austin takes it away and accidentally hits referee Mike Chioda. Rock then gains control of the chair and takes it to Austin’s injured knee. Rock then cracks Austin in the head with the chair, but Austin kicks out again. The Champ then brings out the chinlock. Austin fights out, but Rock cuts him off with a Samoan Drop for two. Rock is pissed this didn’t get the win, so he gives the referee the Rock Bottom. Austin then hits the Stunner on Rock, and Earl Hebner runs out to count but Rock kicks out at two. Mr. McMahon makes his way out to distract the challenger. Austin brings a chair into the ring but Rock hits a low blow before he can use it. Now McMahon is in the ring and he knocks Hebner out. He and Rock double team Austin. Mankind, who should have been the referee for this one, makes his way out and knocks McMahon down and Austin gets a schoolboy rollup for two. Austin hits the Thesz Press. Rock comes back with a Rock Bottom and goes for the Corporate Elbow. Austin moves and a series of reversals leads to Austin hitting the Stunner and winning the WWE Title for the third time at 16:52. That was a pretty good match and the WrestleMania crowd goes home happy, but it never felt particularly epic, like their match from two years later at this event would feel.
Rating: ***¼

JZ Says
The main event is pretty good, but not even close to save this absurdly bad dumpster fire of a show good. Up and down this card, everyone was having terrible matches and the finishes were shockingly bad. You know, some of you newer wrestling fans didn’t have to endure the Vince Russo era, and it shows.