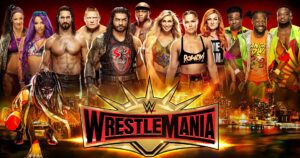 Wow… wasn’t last weekend a wrestling-filled one? First, we had over 3 hours of NXT TakeOver New York, and then we had seven and a half hours (or thereabouts) of Wrestlemania 35, including the kick-off show.

Now, first things first – Wrestlemania was insanely long. As well as the matches we had entrances, music, backstage stuff, people talking, Hall of Fame stuff… Sorry, but I think 7 ½ hours is just ridiculous. And, really, a few of the matches on the main show and most of the talking on the kick-off felt like they didn’t belong there.

Second, the NXT show was the better show all up. Not just because it was shorter, but because more of the matches were great. Not good – great.

Third, if I consider the wrestling, Wrestlemania 35 was actually one of the better Wrestlemanias. No, it was. Online I’ve seen reviews that have placed it as either really good or as mediocre. No-one seems to have declared it crap, so that’s something. Of course, I haven’t read everything online, but from what I have seen, that’s the two trains of thought. But I liked more than half the matches, and liked the way storylines were used, and so I was happy. Also, on that, the main event was one of the better ones. Not the best one, but definitely one of the better. Top 5, easy. It was aping the WM-XXX Daniel Bryan storyline (down to the injury angle), but the WM-35 match was better because the storyline didn’t overwhelm the match and my personal opinion of the wrestling ability of the people in the WM-XXX match not named Daniel Bryan is (a) pretty low in one case and (b) meh in the other.

Now, I am not going to write about every single freakin’ match. For a start, that would involve me watching 10-plus hours again and I actually do have a life. Of sorts. Second, there are some matches I do NOT want to see again. No way. Uh-uh. Fugeddaboutit. Okay, only a few, but one is insanely long and boring.

So, what I am going to do is write about my five favourite matches from the weekend. If you don’t have the time to sit down and waste an entire day, these five will give you a really good show on their own. The order is the order they appeared on the weekend, and that is all. Therefore, without further ado:

NXT Tag Team Championship: War Raiders (Hanson and Rowe) defeated Aleister Black and Ricochet (champions retain)
What a way to start the weekend! This was one of the best tag matches I have seen in years. The moves these guys pulled out were insane, and seeing the big man Hanson hit some of the stuff he did… colour me impressed. I am a complete sucker for the 630-splash, and the fact it was missed was just an amazing bump to take. The match stayed predominantly in the ring (yes, it did go outside a few times) and it was played as face v face, which made it a wrestling match, no shenanigans, just two teams trying to kill one another. The flying space tiger drop was insane. The double team clothesline into high German suplex looked deadly. Hanson’s corner to corner run was simple but so effective. And that finishing move off the top rope was simply stunning. And, I have to say, the show of respect at the end, and the crowd’s response were amazing. This was 25 minutes or so (including entrances) and it felt like half that time. It was brilliant.

NXT Championship, 2 out of 3 falls match: Johnny Gargano defeated Adam Cole 2–1 (new champion, vacant title)
Watching the show, I didn’t think anything could top the opener. Well, the main event almost did. Almost. It is a tight call between the two, but the opener gets it from me. Having said that, this match was a brilliant match where the two wrestlers were evenly matched in skill, size and determination. Not being some-one who watches a lot of NXT (read: virtually none), I really wasn’t aware of the storyline going into this, but the opening package helped a lot. It was really well done. And they continually showed how well they knew one another, so they had to pull out something incredible to win. Cole won the first fall, Gargano got the second with a nice submission move, and then it upped in intensity. That reverse rana was a thing of beauty and a springboard Canadian destroyer! Wow! Then we hit the only annoying point of the match. It was going so well, and then we have one of those ref bumps that kills the poor guy and the outside interference happens (was that a Total Elimination variation?). Played to death, and the match really did not need it. However, Gargano overcomes those odds, takes out 4 men, and locks in that submission hold and wins. Wow. What a match. This was incredible. 50 minutes from go to whoa, and I did not care.

And that’s how you cinch in a submission move! (Gargano on Cole)

WWE Cruiserweight Championship: Tony Nese defeated Buddy Murphy (new champion)
In the Roundtable , I made a disparaging remark about the potential of this match. I’d seen not many of the 205 Live shows, and they seemed a little WCW-lite. Well, I take it back. This was great. Admission: I like Buddy Murphy, and have liked him since I first saw him (as Matt Silva – thanks, Steve!), but he feels so different in WWE to the guy I used to watch. A decent little match (about 12 minutes all up including replays etc.) in front of a crowd still filing into the arena, with a few of the WCW cruiser mannerisms, but not the (ridiculous) complete lack of selling WCW cruisers used to go in for. Yep. I liked it. That inverted rana was another good one, and the reverse cradle piledriver (thing) was sweet. It was a more than decent way to start to kick-off show and 7 ½ hours of wrestling sports entertainment.

That is how to take a reverse rana!

WWE Championship: Kofi Kingston defeated Daniel Bryan (new champion)
Again, in the Roundtable I just asked they be given the instruction to tear the house down. Spoiler: They did. It started of slow and gradually built up more and more. And this time the outside stuff worked because, I think, both guys had it, and the story-line had been building up with the outside guys involved. Daniel Bryan had one of his better matches as a heel and Kofi kept up with him and matched him. This match had a ‘big-time’ feel despite its position on the card. I honestly felt that because it was so far down the card that they were not going to pull the trigger on the title change; I am glad they did. You could feel the joy coming through the screen. Was the crowd hot or what? There was so much to like about this match. Bryan playing the wily one, Kofi the over-excited one, and they played their roles perfectly. And, in the end, you felt that it could have gone either way. That is good sports entertainment. So very cool. And I did like the post-match celebration stuff. 30 minutes all up and it could have gone longer.

Again, locking in a submission hold like a boss.

I reckon this image will last a long time.

WWE Raw Women’s Championship & WWE SmackDown Women’s Championship, Winner Takes All Triple Threat: Becky Lynch defeated Ronda Rousey and Charlotte Flair (new champion, both titles)
The too many negative comments online were wrong: I feel these three deserved to be the main event. This was not an awesome women’s match; this was an awesome match, full stop. The entrances were standard WWE OTT main event fare, and that was good. The women were treated like any other Wrestlemania main event. And I loved Joan Jett playing Rousey in! The match was on from the get-go. No let up. The match itself lasted 20 minutes or so (the whole thing was about 40 minutes), and it felt too short. The start outside was hard-hitting. It did fall into standard 3-way match protocols – a series of 1-on-1 matches with a few 3-way dances to punctuate them. But Rousey took a sick bump to the outside via the apron. Ouch! Look, I’m not going to keep on going on about this, because the match did not stop, and it was clean and, shit, I was invested. I honestly did not know who would win. The selling was good. I love Rousey yelling, “Bitch!” when she gets frustrated; it feels ‘real’. The ending with the table that looked like it would not break and Rousey’s shoulders lifting were the only down points in what was a fine main event and a great way to finish the weekend. The biggest issue is that it came after 7 ½ hours, and so the crowd were mentally and physically too exhausted to get into it and give it the feel it probably needed and definitely deserved. That’s not the performers’ fault. The athletes did everything they had to and then some.

Rousey taking the bump of the night… OW!

Into that table we go…

Another image that I feel we will be seeing for a long time.

Those 5 matches plus all the stuff that went along with them comes to about 160 minutes, almost three hours. That’s enough. And it’s freakin’ awesome.

Now, a few other comments before I finish. I’ve seen the IIconics wrestle in Australia, and while they are good sports entertainers, I feel like they are muted in the ring in WWE. Still, let’s see if being champions can bring out some of the stuff I’ve seen in the indies. Having said that, the match itself was a pleasant surprise for me; not brilliant, but watchable (and Phoenix & Natalya performed a nice Hart Attack). AJ Styles managed to pull a watchable if slightly plodding match out of Randy Orton, who should ask his old man how to sell because that lets him down big time, even after, what, 20 years in the WWE. Shane McMahon and the Miz had a match that was better than it had any rights to be, the sort of garbage match McMahon does so well (see his matches against Blackman and Angle for further proof), and it was a fun little thing with a ridonculous ending. The Smackdown Tag Titles match was also not too shabby; the Raw Tag Titles in the kick-off was also okay, with a feel-good ending. I like Samoa Joe squashing people like bugs, didn’t think it was horrible. Rollins beating Lesnar was a pleasant surprise (does anyone throw a release German as well as Lesnar?); Reigns and McIntyre was also not that bad.

So, the weekend. Only one match in NXT TakeOver didn’t resonate with me. To be honest, only 2 matches on the Kick-Off show did anything for me (but some of the eliminations in the André the Giant Battle Royal were inventive). On the other hand, out of 12 matches on the main show, only 3 didn’t do anything for me (and one really threatened to kill the entire thing). That’s certainly better than many shows, especially from the past decade or so. But I certainly hope a show this insanely long does not become the norm.

I saw some good wrestling, had some great feel-good moments, and it was worth ignoring my university work to watch it all. Not a bad weekend, all in all.