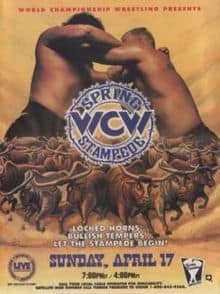 Very recently a friend’s daughter turned 25. (Yes, I am old – deal with it.) I write for a pop culture site as well as this one, and her birthday inspired me to write about the songs of that year (scheduled to be online next month). In addition, for her birthday I did a card up with the things that happened the week she was born. And one of the things that happened during that week was a WCW wrestling PPV.

In fact, it was one of the better WCW PPVs they did: Spring Stampede ’94. And so I pulled it out to watch it and… well, here we all are.

However, this was the year of Wrestlemania X (and the Michaels-Ramon ladder match), the double winners at Royal Rumble ’94, Summerslam 1994 (ignoring the Taker v Fake Taker abomination), and Shane Douglas dumping the NWA title, so it does tend to get overlooked. And that’s unfortunate.

This show was broadcast on April 17 and I got my VHS copy (‘Turner Home Video’) for Christmas that year. It is that VHS tape – 2 ½ hours long and dodgy as – that I am watching as I write this. If any matches are clipped, I didn’t notice.

So let’s set the wayback machine to go to a time 25 years hence and look at a show that is fun and well worth tracking down.

Now, I’ve read a bit about the backstage stuff, how Ric Flair was given the book and decided to, you know, have a wrestling show with some good wrestling on it. What a concept! Who’da thunked it woulda worked?

To begin, Aaron Neville sings one of those versions of ‘The Star-Spangled Banner’ that polarises people. Nowadays there would’ve been a thousand keyboard warriors online complaining how he ruined it by letting his voice go all wibbly-wobbly. But, really, who cares.

Tony Schiavone and Bobby Heenan talk for maybe 3 minutes and then we’re straight into the action. Wow! That’s something that should happen more often – get into the wrestling.

Johnny B. Badd v Diamond Dallas Page.
What an… interesting choice of opener. Page was not a good wrestler at this point, but he is the epitome of some-one who wanted something and worked his arse off to get it. Watching him as a manager, and seeing him grow to be a multiple-time world champion… that’s some career trajectory. Anyway, the match. Johnny carries him through a fairly basic and rather dull match. To tell you how dull it was Schiavone and Heenan had trouble focusing on the in-ring stuff and this was only the opener. Ending comes with a nice top rope sunset flip for the Badd pin. Winner: Johnny B. Badd

Badd goes over for the sunset flip

Television Championship: Flyin’ Brian (Pillman) v Lord Steven Regal (c)
Regal has a bandaged leg, which Pillman goes after (as you would), but despite some brief flurries (including right at the start), this was Regal dominating the match. Considering what we know Pillman could do, and the fact Regal was always up for a fight, this match felt really subdued. Was Regal having one of those uncooperative days he occasionally had or was there something in the booking we weren’t seeing? Doesn’t matter – what they presented was not great. It was just there. And then the finish was a time limit draw after 15 long minutes. Winner: No-one (draw)

Regal locks in some sort of submission move.

Chicago Street Fight, World Tag Team Titles: The Nasty Boys (c) v Cactus Jack & Maxx Payne
This predates ECW’s glory days; this sets the template for every wild, weapon-filled brawl in wrestling afterwards. Words cannot adequately explain how revolutionary this was for the televised wrestling product in the USA (and the wrestling product full stop here in Australia). Stiff, unprotected shots with weapons, going into the crowd, ignoring the ring – it started here for the world of higher profile wrestling. It’s a short match – barely ten minutes – but it is brutal. Even by today’s standards, some of the shots are still uncomfortable to watch. This was so different when we saw it back in 1994, and it actually still holds up. No gimmicked weapons, shots that looked like they hurt a lot. WWF might have let loose a game-changer with the ladder match in 1994; WCW affected the course of wrestling as a whole with this match. Poor Tony and Bobby have no idea how to call it. Watching Sags just hit Cactus over the head with a table three times (it didn’t break) looks, well, nasty. And then Cactus suplexes it onto Sags! And it still didn’t break! The ending comes when Sags hits Cactus on the head with a snow shovel (an unprotected head shot…) and gets the pin. Oh. My. God. Awesome match! Winner: The Nasty Boys

Well, that was a stupid place to put a concession stand

Greco-Roman shovel shot to the head.

International World Heavyweight Championship: Sting v Rick Rude (c)
Yes, long before WWE had two world titles thanks to the brand extension, WCW had two world titles thanks to… stupidity, I guess. Harley Race comes out before it starts to issue an open challenge to the winner on behalf of Vader, then attacks Sting, who dodges with ease; Rude jumps Sting and Sting kills him. Actually, Rude was in a bad way physically here, in a huge amount of pain, and the rematch he would have with Sting, where he hurt his back quite badly, would be his last proper match (apart from a 6-man tag match in ECW). I would like to point out here that on April 20, 1999, almost exactly 5 years later, and 20 years ago, Rude passed away due to heart failure. He was a fine wrestler, and his “Ravishing” gimmick was perfect for the man. Hard to believe it’s been 20 years… Sorry. The match. Look, considering Rude’s limitations, this is not a bad match. A few restholds, sure, but they don’t just stay there; there is always fighting against them. They certainly played it well and it is very watchable. Sting was often under-rated in the ring. Ending… Did anyone sell an atomic drop as well as Rude? Rude does a really nasty bump that looked like it could have blown out both knees. The ref is killed (apparently). Race comes back out, followed by Vader. Stings takes the interlopers out. Then Race stuffs up the ending. Rude is forced to fight for the rude awakening, let Sting out, then fight again because Race missed his cue to hit Rude with the wimpiest chair shot ever, then Race just wanders off like your grandpa who left suddenly remembers he left the kettle on in 1954. The ref wakes up, Sting gets the pin. Race was useless here. Winner: Sting

Bunkhouse match: Bunkhouse Buck v Dustin Rhodes
This is a decent brawling match, but after the street fight earlier, it does pale in comparison. It feels maybe too long, but it is not a bad match. Lots of brawling, lots of action in and out of the ring, belt-whipping – fun match. Dustin bleeds like a stuck pig, which always makes for a nice visual. Ending comes after Dustin is distracted by Col. Parker, Buck rolls him up, the hit each other, Parker gives Buck some brass knuckles or something, and Buck uses them to knock Rhodes out for the pin. Winner: Bunkhouse Buck

Am I the only one who misses a bit of “colour”?

Jesse is backstage with Rude, who is furious, and he and Vader have a pull-apart confrontation. Interesting. And not long. Short, sharp and shiny, not belabouring a point. Well done.

Grudge Match: The Boss (Ray Traylor, The Boss Man, The Guardian Angel… you know the one) v Vader
Boss jump-starts the match and manages to get Vader to wipe out Race. These two big guys can move! They are jumping and spinning and pulling out moves guys half their weight aren’t doing. I like this match (so sue me). It really does not stop. They are always doing something, and it looks great. But… how did the ref not see Boss get thrown over the top rope? Anyway, Vader hist a Vader-bomb, then the top rope moonsault for the pin. I enjoyed this one. Winner: Vader

Okay, that’s some impressive strength from the Boss.

Post-match, Race tries to handcuff Boss, but Vader gets free, grabs his night-stick and brutalises Race. Backstage, with Jesse watching, commissioner Nick Bockwinkle strips Boss of his gimmick… is that even a thing? Apparently… it is. And they managed to get it done in 2 minutes. I like that minimalistic approach.

WCW World Heavyweight Title: Ricky Steamboat v Ric Flair (c)
5 years after their last awesome match why not do it again? Now, I do not do play-by-play, but for 30 minutes I was thoroughly entertained. There was not down-time. They just went at it. Ground mat wrestling, switches, flying moves, chops and punches… it was all there. The only issue I had at the time was the shadow looming over it all – Hulk Hogan had already challenged the winner. I hated the idea of Hogan going to WCW and running over the company and making it bow to his will… which is exactly what happened. But now, because I know what happened afterwards, I can turn that off and enjoy the match a bit more for the match itself. It is great. If you take the 1989 matches as an awesome trilogy, this is like that really well written movie that comes years later to end it all nicely. Think Mad Max, then Mad Max II, and finally Mad Max: Beyond Thunderdome, and then years later the frankly excellent Mad Max: Fury Road comes along. This is like that. (Certainly better than the Indiana Jones 4th instalment.) Steamboat’s perfect application of the figure four and moving back to the centre of the ring is a thing of beauty. Then we have the protracted finishing sequence. Reversal, pin attempt, pin attempt, reversal, just back and forth until Steamboat locks in the double chicken-wing that helped him retain the title 5 years earlier at Clash of the Champions VI – Ragin’ Cajun. Like then, Ric Flair falls back, but this time both guys had their shoulders down. It’s a tie! Champ retains! Winner: Tie

You knew there had to be a Flair Flip in the corner, right?

While slightly disappointing way to finish, it means they are as good as one another. And that I can live with.

Look, if you can catch this show, do so. It is worth your time (but maybe skip the first two matches…)

By the way, feel free to leave messages. I can’t get a Disqus account, but I’d like to see some sort of conversation going here.