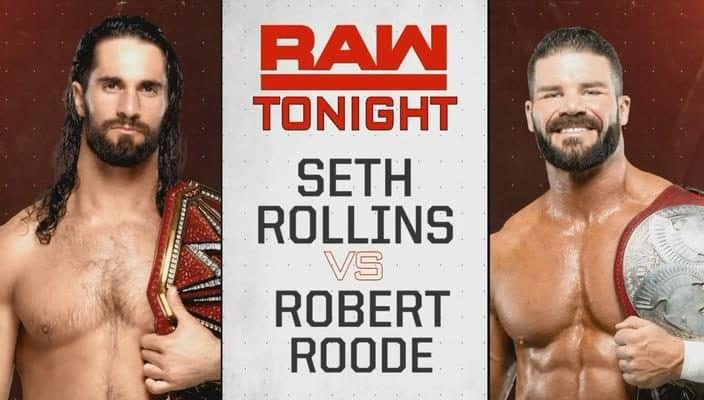 Seth comes out looking just fine after working two matches and getting his ass kicked by The Fiend. He talks about losing the tag titles, but beating Braun thanks to the Pedigree and the stomp. Bray is in the Funhouse and says that Seth’s his future best friend. The rabbit interrupts Seth and tells him to run. Bray says that he forgives, but he never forgets – and that’s why The Fiend said hello and he might even say hi tonight. The Fiend/Funhouse split is the best usage of Bray yet – it’s incredible. Upside-down graphics air as Funhouse music plays – so at least they can just blame it in-canon on The Fiend. Roode and Dolph, with a perm come out for a summit with The Revival before Braun comes down and kills everyone but Roode, who runs. This did a great job of getting everyone who wasn’t Braun or Roode under and burying all the tag titles.

Nikki and Alexa talk about Sasha burying the belts and Bayley forgiving Sasha. The OC comes out to face Cedric and the Viking Raiders. Hanson hits the corner squat drop and a crazy flip dive on the floor off the top and splats.  Cedric goes to superplex AJ, but eats a Phenomenal Forearm before eating super Styles Clash. Boy did the last 48 hours get Cedric over huge! Truth and Carmella get a tour of Tennessee by Mayor Glenn Jacobs and Truth says he knows him – he’s Larry Bird! He has a limo to give them a full-fledged tour of the city.

Corbin vs. Gable in the KOTR finals features Gable looking like a total nothing wearing a Connor’s Cure shirt – so he’s just another guy. They have a great big man vs. little man match, with Corbin getting a couple of Corbin locks and tossing him into a ringside chair and then landing a powerbomb off a Backlund lift by Gable. Gable gets an ankle lock, but Corbin escapes and gets a world’s strongest slam for 2. They do a heel miscue spot on the floor that looks ridiculous as Gable was halfway in the ring with Corbin not even starting the shoulder charge into the steps. Gable gets an ankle lock with a legscissor, which plays more into Corbin’s final match being with Kurt, and Corbin gets the rope. Like their old NXT match, Gable goes for a la mistica and Corbin turns it into an End of Days to win. So after all that, Corbin doesn’t even get a coronation.

Mike gets buried further as Maria says Ricochet is the father. Ricochet says that isn’t the case and Titus and the Profits celebrate with the official fan-made UT shirts. Ricochet squashes Mike in a quick match to further pour dirt on Mike’s grave. Bray has another video showing the Wall of Friendship for guys he’s taken out with the mandible claw. Maria says the real father of the baby is Rusev! Rusev’s back with a majestic stache and he’s ripped! Rusev crushes Kanellis with the Accolade.

Mayor Glenn tricks Truth and he runs into the goal post at the stadium and gets knocked out – so Kane is now the 24/7 Champion. Kane does his own “I’ve still got it!” chant and Cole proclaims that he’s the first mayor to be 24/7 Champion. Rey’s out for a match and Cesaro… I guess is, but he’s in slacks, sneakers, and a Chono-esque jacket. Rey eats a big uppercut to start, but wins with a Code Red. At the Funhouse, we see Bray’s neck tattoo and he adds Seth to the wall of friendship.

AOP cuts a promo with subtitles looking like mafiosos in suits. They say that WWE is soft and they’re here to fight. This was fantastic and the minimalistic presentation was right out of the original ECW – this did make use of some cool depth of field shots, but otherwise, would’ve been right at home in peak-era ECW. Bayley and Sasha face Bliss and Cross, with Bliss landing hard knee-first in the steps. Nikki comes in after Lexi goes to the back and it’s a handicap match – but at least the heels have the numbers edge. Sasha gets the Bank Statement and a submission win. Becky comes down for a goofy chair fight with Bayley and Sasha. Charlotte comes out with a chair and in heels, which seems like disaster. Backstage, Sasha calls Becky a bitch – ooh, edgy. So Becky has gotten the better of Sasha twice in two shows – what’s the appeal of a rematch?

Mayor Glenn arrives at the building, but Truth is on top of the limo and he schoolboys him. Kane goes to chokeslam him before Truth says that his job is 24/7 – just like Kane’s. Becky calls Sasha a trapped rat and she’ll use the cell to break Sasha down. Dana Brooke faces Lacey in a match that has to be a rib. They have a really awkward match and Lacey wins with a sharpshooter that honestly was good. Cheer Money comes out with Roode being accompanied by Dolph to face Seth. Roode gets little chance to shine here and eats a buckle bomb and stomp – but Dolph breaks the pin up before The OC jumps in too. Kane returns to have everyone bounce around for him here in nearly 2020.

The Fiend comes up from behind Kane after a blackout and takes him out with the mandible claw. The show ends with creepy upside-down and VCR-style graphics for the Funhouse, so this was probably a rare example of the company being subtle and the ending was unique. They’re going all-in with The Fiend and so far, it’s working far beyond any expectation could have been. They might as well give him the title with the Cell match and capitalize on it – especially with The Fiend DLC being a big part of the 2K game also hitting in October.