Spoilers from thirty-four to thirty-five years ago.

Was there a single more influential or important Marvel series for a young reader in the 80s than Secret Wars?  This title, which was developed around a toy line, gathered heroes and villains that had never met or worked together, and threw them onto an alien world.  It was bright, fast moving, and led to some massive changes, chief among them being the introduction of Spider-Man’s black costume.

I started reading this series somewhere around issue five or six, and was immediately drawn into the scope of it.  There were so many characters I didn’t really know, and I thought that it was one of the most exciting things I’d ever read.  Mike Zeck’s art blew me away, and it was because of this series (and its horrible sequel, which we should never discuss) that I started to explore corners of the Marvel Universe I hadn’t read before.

I think the coolest thing I remember from this book is seeing the X-Men interact with characters that were pretty foreign to them.  I immediately took their side in the conflict, and thought it was so cool to see that heroes didn’t automatically trust one another.  I also came out of this series with a life-long love of Doctor Doom, who Shooter made me care about for the first time.

I fear that returning to this series some thirty years after I last read it isn’t going to go over so well.  I’m pretty sure that Shooter’s writing is going to end up feeling clunky, and the plot creaky. At the same time, I’m hoping I can recapture that same feeling I had way back when.  Let’s see what happens. 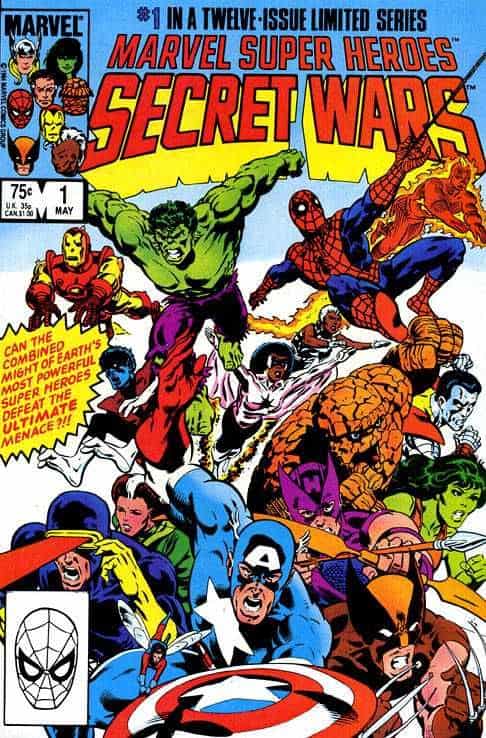 Before I started reading this trade, I commented that I didn’t expect it to live up to the nostalgia I feel for it.  That’s exactly what happened. This series has not held up very well at all. A cosmic being kidnaps a bunch of people from Earth, and tells them to fight each other, so that’s basically just what they do?  There’s not a lot of trying to reach across the aisle, and to find a solution to the very strange predicament they find themselves in.

Most of the characters are given very thin rationalizations for how they act.  You would think characters like Reed Richards and Captain America would do more to try to find reasonable solutions for the situation they found themselves in.  Instead, everyone behaved predictably and violently.

Shooter’s writing is awkward in places, as he introduces new characters without explaining how they got there.  Titania and Volcana are just in Doom’s lab? How did they get there from the suburb of Boulder where they lived?  Likewise, how did Spider-Woman make her way to the heroes? And did Spider-Woman already have her powers and costume when she arrived on Battleworld?  Why did we never even learn her true identity? It’s strange the the heroes just accepted her so easily, and that she kind of never went anywhere for a while after that. 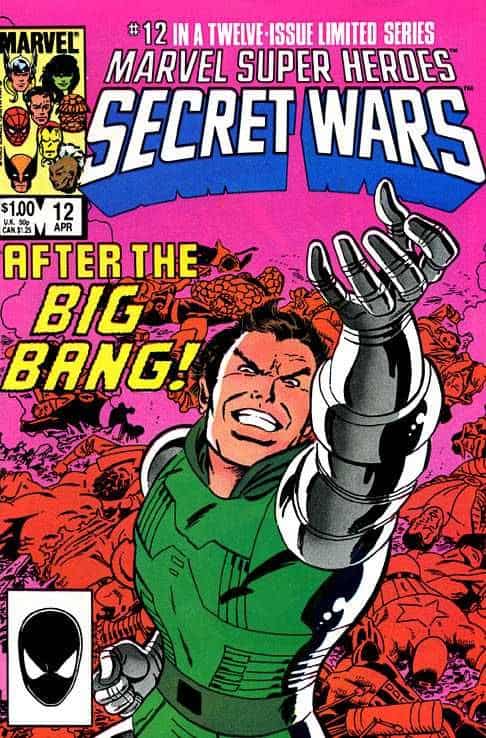 Character work wasn’t, for the most part, a focus of Shooter’s.  Sure, we got some interesting things done with Colossus, Molecule Man, and of course Doom, who we will circle back to, but the other characters were either largely silent (Captain Marvel never once felt like the Monica Rambeau I enjoyed so much back then), or just reverted to the most basic of character sketches (Wasp is basically returned from the dead, and is mostly just concerned with her hair and makeup?).  You’d think, even with a cast of this size, everyone would find time to shine in twelve issues.

One of the things I remembered was the distrust between the X-Men and the other heroes, and I did find that interesting at first, but it actually felt pretty forced, and then just fell away.  I do think that it was interesting that Shooter kept Magneto with the heroes throughout, given that it was still about a year before his trial and the gradual (and temporary) thawing of his relationship with Xavier and the team.

Shooter has some annoying ticks in this series, most obvious in the irritating way in which he wrote Klaw’s dialogue.  The crazy being of sound, rescued from Galactus’s vessel, is supposed to have gone insane, but instead, he mostly just repeats the final sound of the last word of his dialogue (ogue ogue ogue), and it’s really annoying.  Also, we had Ben Grimm defeat the Lizard by playing patty-cake with him. That is something that actually happened in this comic.

I’d forgotten how much of this series revolved around Galactus, but only until it didn’t.  After Doom stole his energy, Galactus becomes nothing more than a footnote in this comic. His herald Nova ends up finding him off-panel, since he wasn’t needed for the story anymore.

I get that this series was designed to market a toy line, and to accomplish a few set things, like give Spider-Man his new costume, but I still think that the writing could have been better.  When I first read this series, it was exciting to see so many characters together, as that was something that almost never happened (I still have never read Contest of the Champions, the only precursor event that comes to mind).  As a young person, the coolness factor of that, and the sense that the stakes were really high, overpowered any critical thinking about plot and characterization, but now that big crossovers take place a couple of times a year, that aspect of the series has lost all appeal, leaving me with an overly-complicated plot built on, effectively, nothing.

Except for Doom.  Doom became a much more interesting character over the course of this series, as the only person who was able to look at the Battleworld situation as an opportunity to advance his own personal power and ends.  When everyone else is working to win the “war” or protect their friends, Doom is scheming and looking for opportunities, but also looking at the bigger picture. After he gains the Beyonder’s powers, he is torn between the ascension that brings and finally being able to achieve his worldly aims (including fixing his face and rescuing his mother).  Shooter leans into this dichotomy heavily in the final two issues, and it’s interesting that it’s Captain America he has debating him rather than Richards, who knows him well. After this series, Doctor Doom became a favourite character of mine, and I’ve often enjoyed seeing new writers build off the humanizing that Shooter (and, around the same time, John Byrne) did with him.

The other character that I started to like after this series is Molecule Man, but when Shooter wrote Secret Wars II, he made me hate Owen.  I didn’t like him again until Jonathan Hickman’s Secret Wars remake series, but that’s a whole other column for about ten years from now.

Mike Zeck is one of those artists I will always associate with my own golden age of the 1980s, but I’m afraid to say that his art in this series is not as strong as his runs on Captain America and The Punisher.  His Wolverine looks cool, and I like the way he drew black-suited Spider-Man, but there are just too many characters in this book for him to have done a bang-up job on all of them. There are plenty of action sequences that just look a little too rushed.  The covers, on the other hands, are fantastic, especially in the early issues.

In all, I did enjoy revisiting this title, which did have a huge influence on me as a kid.  It might have been better to leave this to my memory, but reading it again was fun, and took me back to the excitement of getting some of these issues at the comics store, and being excited to wait for the next one.