Sometimes dead is better, but that belief holds no water in Hollywood. Studio executives will revive anything in hopes of a hit. While Stephen King’s Pet Sematary seemed to wrap things up at the end, the movie had a good enough following that it had to climb from the grave. Thus Pet Sematary Two in 1992, three years after we were all singing the Ramones theme song from the first. Director Mary Lambert was back in the cemetery reminding us all that there’s no good reason to bring back a squished pet. The movie is coming out on a special edition Blu-ray from Scream Factory in February. There will be plenty of bonus features including Clancy Brown (Highlander) remembering his time in “Maine.” Here’s the press release from Scream Factory: 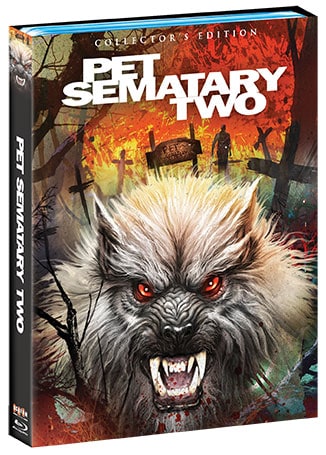 Movie Synopsis:
Sometimes dead is better. But the shocking terror that plagued Ludlow, Maine, in Pet Sematary is still very much alive in this sequel to the 1989 hit film.

After the death of his wife, veterinarian Chase Matthews and his 13-year-old son, Jeff, move to Ludlow to rebuild their lives. Antagonized by the neighborhood kids, Jeff befriends another outsider, Drew Gilbert, who lives in fear of his cruel stepfather, Gus. After Gus cold-bloodedly shoots Drew’s beloved dog, the boys bury the body in the local Indian burial grounds – a place rumored to have the powers of resurrection. But when evil is awakened, the boys realize that sometimes you should just let dead dogs lie.