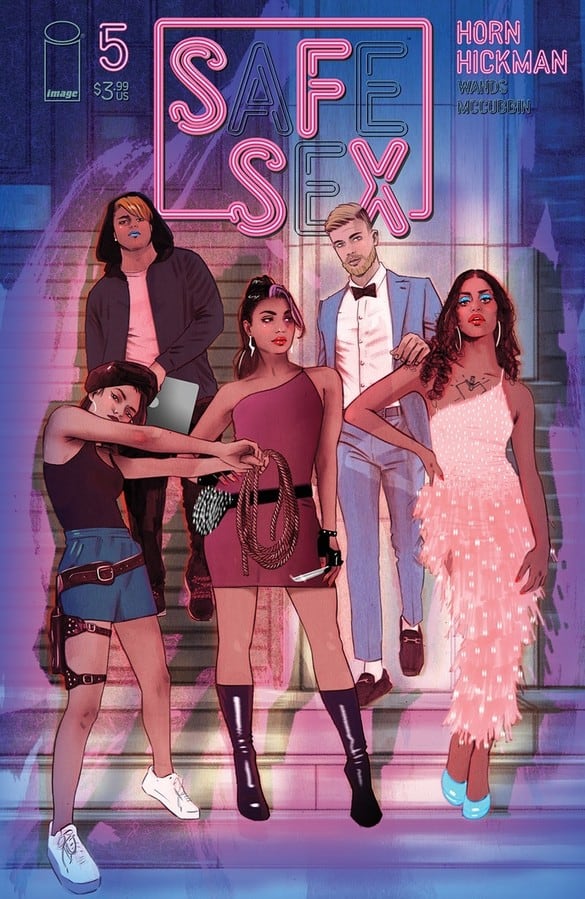 SFSX #5 – New series artist Jen Hickman takes over as our various heroes put their plan into effect, sneaking into the Pleasure Center to rescue two of their own.  Things don’t go to plan (if they did, comics and movies would be boring), as we learn just how deep the reconditioning Jones was subjected to goes. Tina Horn is writing one of the most interesting new comics on the stands, exploring a near future where sexual pleasure has been outlawed, as have sex workers and, basically, interesting people.  I like how this book applies some standard dystopian and thriller tropes to a queer, intersectional population, and thereby makes something I’ve never quite seen before. It’s not showy in the way of an early Vertigo comic, but instead makes it clear that its main characters are the most normal people in the comic. It’s pretty cool.

Legion of Super-Heroes #3 – Some of the things I was most afraid would happen when it was announced that Brian Michael Bendis was going to be writing the LSH are starting to happen.  This issue is a bit of a mess, as Superboy goes back to the past, without permission, to get his buddy Robin, to bring him to the future. It doesn’t make sense for him to do this in this way, as Jon has always been portrayed as respectful and mostly logical.  Also, for someone who doesn’t really understand how the future works, he seems to have learned how to operate a time bubble pretty easily. Then, Bendis has the Legion react poorly to Damian being there, all of which hints at the real reason they wanted to get Jon in the first place.  The other part of the story, about Ultra Boy’s father being upset with the Legion feels disjointed, and I’m not sure how Saturn Girl’s squad can be on Planet Gotham on one page, and then be in Metropolis on the next, with no time appearing to have transpired in between. We still know next to nothing about the Legionnaires, although I was happy to see Dawnstar get a bit of screen time this issue.  Ultra Boy appears to be the only character getting any actual development, and it was deeply odd to see that Cosmic Boy and Shadow Lass are together, although no one seems to know that. Denis Calero’s art is lovely, but the thing that I knew would happen when I saw that Calero is the artist happens in this issue – he doesn’t draw the whole thing! Next issue is supposed to show us this long-awaited orientation presentation, which might provide us with some back story and at least a guide to who all the characters I don’t recognize are.  This could be a lot worse, but it’s not all that I’d hoped it would be.

Rai #3 – Rai has been pretty decent so far, but that’s because Juan José Ryp has been doing the best artwork of his career on this book.  This issue has Rai shutting down mysteriously, leaving Raijin in danger and on his own. The reason why Rai is non-responsive is interesting, as it shows that Rai’s desire to be more human further isolates him from people.  This is now the only Valiant book that I’m getting, which makes me sad. I used to get almost their entire line.

Skulldigger + Skeleton Boy #2 – I’m very much enjoying this Black Hammer-verse series, that questions what it would have been like had the Punisher gotten himself his own Robin-type character.  Skulldigger trains and indoctrinates the boy he rescued last issue, and the boy becomes more bloodthirsty than Skulldigger expected. At the same time, a villain, Grimjim makes a move on an older hero running for mayor, who appears to be connected to Skulldigger, while a police detective investigates the anti-hero, despite being warned away by her superior.  Jeff Lemire has us in very familiar territory, but he and Tonci Zonjic are making it all feel fresh and interesting. I like this book, and the expansion of the Black Hammer line into a story that has nothing to do with Abe Slam and his friends.

Undiscovered Country #3 – As we get deeper into this series, it becomes ever stranger.  A group of people (doctors, politicians, and military types) are the first to travel to the continental United States in the thirty years since the country sealed itself off from the world.  What they’ve found seems impossible and bizarre (picture a Mad Max film directed by Ralph Steadman). They’re on a bit of a quest for an Uncle Sam figure, but as the story goes along, we start to learn about everything the various members of the group are hiding.  Ace, the historian, it turns out has some very strange theories about what’s been going on in the US, and is determined to prove them, even if that might put the mission in jeopardy. The comic book science gets wild in this issue, but my interest level remains high.  This series is co-written by Charles Soule (whom I have a ton of respect for), and Scott Snyder (whose writing has progressively turned me off since the beginning of the New 52 era). I’m not sure exactly how their collaborative process works, but I feel like I can detect some elements of what I don’t like about Snyder’s writing peeking through from time to time.  Still, I want to give this book a chance, as it’s definitely original and creative.

Valkyrie: Jane Foster #7 – I didn’t realize that co-writer Al Ewing was leaving this book.  That’s a shame, as he is maybe the best writer doing regular work at Marvel these days (check out his Immortal Hulk), and it was his name that got me to add this title to my pull-file.  I’ll give Jason Aaron’s new co-writer a few issues, as I like Jane’s character, but this might be on the chopping block. This is a good issue, as Jane and a gathering of doctors with connections to the superhero world attempt to stop an aspect of the universe from killing Death itself.  Ewing does big cosmic things like this well.

Over My Dead Body TP 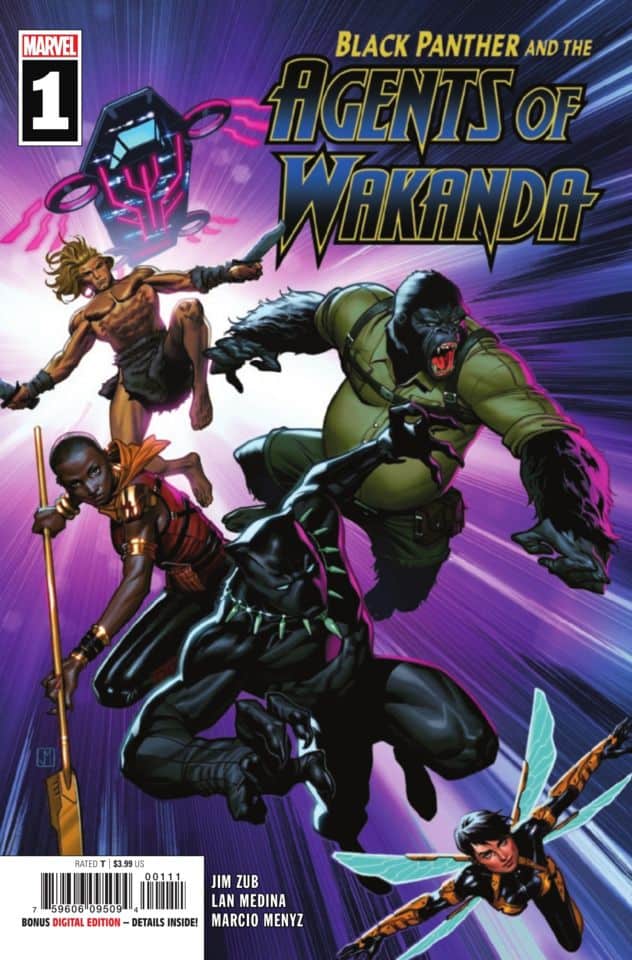 Black Panther and the Agents of Wakanda #1-3 – I’m always going to be curious to check out a book built around a bunch of C-list characters.  T’Challa has recruited, alongside Okoye, such characters as Gorilla Man, Ka-Zar, Fat Cobra, Werewolf By Night, Mockingbird, and The Wasp. That definitely catches my eye, even if writer Jim Zub has maybe a few too many things going on to give some of them any space at all to shine.  I like this idea of a book centred on the Avengers’ support team, but three issues in, it seems very fluid and plot driven. There’s a lot of potential here though, so I’ll check out more issues.

Star Wars: Age of Rebellion – Darth Vader #1 – At this point, stories of the Emperor testing or teaching Vader through humiliation are becoming common, but this one was still decent.  More should be done to situate these one-shots in continuity.

Star Wars: Age of Rebellion – Jabba the Hut #1 – We really don’t know a whole lot about Jabba, and the way the various cultures of Tatooine (Jawa, Tusken, scum) interact with one another.  Greg Pak has some fun with this story, showcasing how Jabba solves problems. There are a mess of artists on this book, and some pages (I suspect by Marco Turini) are gorgeous.

Star Wars: Age of Rebellion – Lando Calrissian #1 – It’s probably next to impossible to write a Lando story that isn’t fun; his character just lends itself to stories that border on the ridiculous.  In this issue, Lando works to make some money to stave off bankruptcy in Cloud City, but things go awry. It’s decent.

Star Wars: Age or Rebellion – Luke Skywalker #1 – This is the first that we see Luke as a more confident Jedi in a Marvel comic, and it’s a bit jarring at first, as I was never quite sure where this issue takes place (I’m guessing it’s just before Return of the Jedi).  Luke is on a mission with some Rebels who don’t seem to know him well, and has to resist the temptations the Emperor sends his way. It’s a decent issue, but has too many artists with varying styles.

Star Wars: Age of Republic – Count Dooku #1 – Besides having a dumb name, there’s not that stands out about Dooku.  He was made more interesting in the Clone Wars cartoon than he ever was in the prequel movies, but that doesn’t say all that much.  Here, he’s off on a remote world to connect with some bad guys for Palpatine, when he runs into a Jedi Knight that recognizes him, putting his mission in jeopardy.  There’s not a whole lot to this issue, really.

Star Wars: Age of Republic – General Grievous #1 – I hated General Grievous in the prequel films (I thought his name was funny though), but grew to tolerate him in the Clone Wars cartoons.  This one-shot doesn’t change my opinion any which way, except I’d forgotten he wasn’t a robot. Luke Ross is a great artist – I feel like he’s a little wasted on stuff like this.

Star Wars: Age of Republic – Padmé Amidala #1 – In contrast to one-offs like the Lando one, books like this, portray Padmé as the swashbuckling diplomat, kind of fall flat.  I think that there was an interesting character somewhere in here, but she was always defined by either her duty or her relationship with Anakin, and never got to be much of her own character.  Part of the problem is that so many Clone Wars era stories involve negotiations, which aren’t often all that exciting.

Star Wars: Age of Republic – Qui-Gon Jin #1 – Liam Neesom’s character never got a lot of space for development, so when given the chance to do something with him here, Jody Houser relies on the usual Star Wars Jedi tropes.  He questions things, goes to a planet he’s never been to, fights a battle with the Dark Side in his mind, and returns with more questions. We’ve been here before.

X-23 #12 – Finally getting to the end of this most recent X-23 run has me wondering, where is Honey Badger these days?  She was put to such good use in All-New Wolverine, and in X-Men Red, but I haven’t seen her wandering around on Krakoa yet.  I like that character. I also look forward to the day when we get a whole run of X-23 that is not about cloning. Just once, it would be nice. 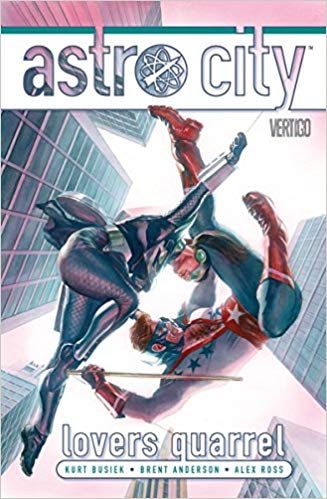 Astro City Vol. 12 – Lovers Quarrel – I always enjoy a good Astro City trade.  This one contains two stories. In the first, focusing on Quarrel, she and her partner Crackerjack can no longer avoid the truth that they are getting older, and react to that fact very differently.  Along the way, we get a good look at Quarrel’s past and upbringing, and come to understand what motivates her. I like that Kurt Busiek portrays her relationship with Crackerjack as being pretty difficult at times; it’s one of the more realistic relationships I’ve seen in superhero comics.  The second story focuses on Sticks, a talking gorilla who’s come to Astro City to make it as a musician, but the superhero life just can’t leave him alone. These comics are always masterfully done, and appear timeless thanks to the art of Brent Anderson. I should make more of an effort to catch up with the rest of the Vertigo trades.

Think Tank Vol. 3 – I like Matt Hawkins’s adventures of a very smart, but easily fooled, scientist who is forced to create weapons for the American government.  This volume shows him getting involved in a near-war with China. Hawkins puts together a neat little puzzlebox of a story here, and it’s pretty cool.