William Castle was getting a bit of a revival at the turn of the century when producers Robert Zemeckis and Joel Silver remade his classic House On Haunted Hill. The movie was a bit of a hit so the filmmaker decided to remake 13 Ghosts as Thirteen Ghosts. The original was noted for having Illusion-O as the big effect that Castle sold the kiddies in 1960. For the 2001 remake, the filmmakers had a budget. The film is the classic tale of a man inheriting a wonderful house only to discover it’s full of ghosts. Is he going to be able to share the space with the undead? Now the movie is coming to Blu-ray as Thirteen Ghosts: Collector’s Edition with almost as many bonus features as ghosts. Here’s the press release from Scream Factory: 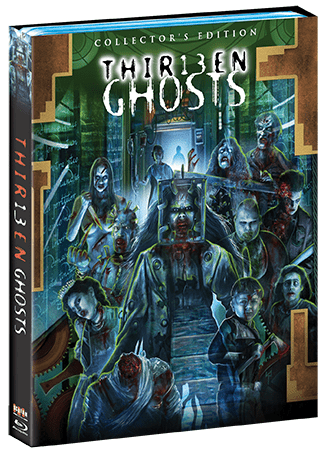 A family inherits an elegant steel-and-glass mansion from a deceased relative. The catch is that along with the house comes a slew of ghosts that can be seen only through special goggles.