For over a year Scream Factory has been digging into the vaults of Universal for their classic horror to appeal to fans of Svengoolie and the Creature Double Feature. As summer winds down, the scares will build up with Universal Horror Collection: Vol. 6 hitting shelves on August 25. The four films will keep you give you chills. The Black Castle has Boris Karloff (Frankenstein) and Lon Chaney Jr (The Wolfman) involved in a vanishing people mystery. Cult of the Cobra has life change for six soldiers witness a woman turn into a giant snake. They weren’t supposed to see it. The Thing That Couldn’t Die has people on a Western ranch discover a box with a head inside. It’s not quite dead. The film double billed with Hammer’s Horror of Dracula on original release. The Shadow of the Cat is a Hammer film that Universal distributed. A cat witnesses the murder of its owners and is bent on revenge against the killers. This is the perfect film to watch your household felines. There’s no word of bonus features yet. Here’s the press release from Scream Factory: 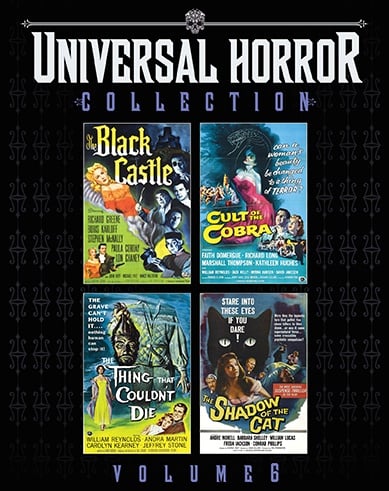