What Is A Smashtronaut?! Plus Celestialbuster Iron Man Armor Debut!

With the above variant cover and those below this debut issue, including the textless or virgin variant versions of most of these below has probably over 40 variant covers; a selection of them follows.

There’s also two blank variant covers with one in white and one in purple.

We open with a creators credits page and…

…then into the action with Hulk seemingly trapped…

…as the narrator flips the Hulk mythos on its head that…

…the Hulk exists to protect the world from his alter ego Dr. Bruce Banner?!

Banner and Betty Ross are discussing what ails him and the revelation comes that the Hulk is immortal not Bruce Banner.

And, in another twist, Banner ask Betty to get out his head?! 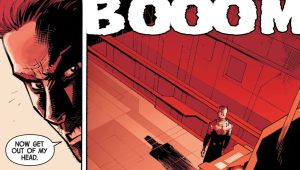 Well, it looks Banner’s head is a spaceship!

That he uses to pilot the Hulk who is battling Tony Stark in Hulkbuster armor; the new Hulk Smashtronaut helmet and more debuted over 9 pages in a Marvel FCBD 2021 offering (full spoilers here)

Doctor Strange, as the revealed narrator, explains to the Avengers that Banner has split, by design it seems, into three psyches and…

…he may be even more dangerous now.

…harness the Hulk’s power and rage!

As a result, Hulk breaks through Iron man’s weaponized Adamantium and… 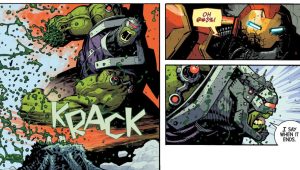 …gets to his goal some kind of Celestialbuster type armor which doubles as spaceship or something. 😉

…the Hulk is Bruce Banner’s captive!

While the Immortal Hulk incarnation of this series and character generated much buzz, it was not my cup of tea as I do not gravitate to horror. That said, I thought it was an innovative approach particularly the “immortal” part and exploring it further.

This adjectiveless takes on Hulk infuses it a different genre, this time sci-fi. It doesn’t channel horror, but it does feel to include elements of suspense naturally coupled with super-heroics.

Intriguing opening issue with solid art that crackles with energy and harnesses the rage on the page as the titular character does. A great start, but way too many variant covers.