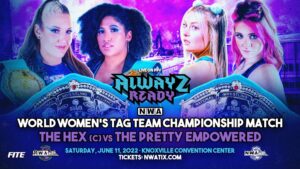 Kay takes Kenzie down with a side headlock, then she works back to the corner and tags Marti in. A few more quick tags, then Kay gets a near fall before Kenzie breaks a wristlock and runs to her corner for the tag. Kay trips Ella up and applies a headlock, then Marti gets the tag and they hit some tandem moves before Marti hits a Penalty Kick for two. Pretty Empowered tries to regroup on the floor, but Marti takes them down with a dive. Kay goes up top but Kenzie hits her from behind and follows with a powerbomb off the turnbuckles for two. Pretty Empowered finally gets the upperhand after some shenanigans on the floor, then Ella gets the belt and brings it into the ring. The referee stops her, but Ella kicks Marti below the belt and slams her down for the win. 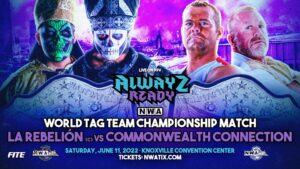 Wolf shoulder tackles Williams and follows with a ropkick. Williams fires back with some European uppercuts and both make the fresh tag. Smith hits a butterfly suplex and follows with a headlock, then Williams tags back in and suplexes Wolf before Smith gets back in and sets Bestia on the turnbuckles. Bestia connects with some headbutts and a tornado DDT, then Wolf tags in and Bestia assists with some tandem moves. La Rebelion hits Mark Of The Beast but Smith stops the pin attempt, then La Rebelion hits Total Rebelion on Williams after throwing Smith outside. Williams gets busted open, then Williams assists with double team moves before diving off the top to hit a fallaway slam, followed by a diving headbutt from Smith for the win. 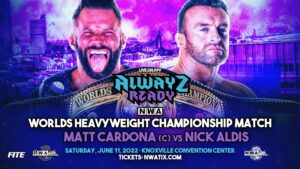 Matt Cardona comes to the ring with Chelsea, VSK and Mike Knox. Cardona says this is his pay-per-view and he earned it, but he can’t compete. He says he’s proud of everyone in the ring and they should be proud too, and everyone knows he’s the NWA World Heavyweight Champion. Cardona says the title was beautiful when he won it, but now it’s got some scratches and blood on it, and it’s missing some jewels because he takes it all over the world defending it.

Cardona says it’s no secret that Nick Aldis doesn’t like him, but they’re more alike than Aldis knows. Cardona says he needs the title and he woke up from surgery and it’s the first thing he thought of. He says he needs the title and doesn’t want to give it up, but he’s the champion and calls the shots. Billy Corgan slowly walks to the ring and speaks with Cardona out of range from the mics, but he motions for Cardona to hand him the title. Cardona fights the decision, but Corgan tells him that he must give the title up.

Nick Aldis comes to the ring with a mic and says he’s not the only one that’s hurt because his back is injured from carrying the company for five years. Aldis rips on Cardona and calls him an ex-WWE guy that conned Billy Corgan into giving him a top spot. Aldis says this isn’t Cardona’s belt or Billy’s, it belongs to Dusty Rhodes, Ric Flair and the fans. Aldis says Cardona will never be a world champion, and there’s a reason why Ric Flair wants him at the Jim Crockett Promotions show at Starrcast, and there’s a reason why he gave Harley Race’s final interview. Aldis tells Cardona to go heal up and stop jerking off over his own Tweets, because he’s going to close the show for the fans and wrestle a match.

Matt Cardona has relinquished the NWA Title.😭
It's gonna be Aldis vs Murdoch vs Sam Shaw vs Latimer for the NWA Championship RIGHT NOW! #AlwayzReady pic.twitter.com/W02MRG4Qtg

Trevor Murdoch comes to the ring, followed by Thom Latimer and Kamille, who says Latimer is a world championship-caliber athlete. Latimer argues with Corgan about being in the main event, then Sam Shaw makes his way to the ring. Latimer asks if he’s got anything to say, Shaw says ‘I want in’ and gets ready to fight. 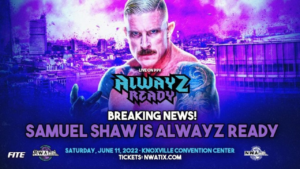 Everyone goes out into the crowd and fights, with Murdoch and Latimer going one way while Shaw and Aldis go in the other direction. They meet back up near the barricade before fighting around the ring, with Shaw whipping Aldis into the ringpost. Everyone works their way back into the ring, but Latimer offers Shaw a handshake. They whip each other towards Aldis and hit clotheslines, then Murdoch says he wants in too and both Latimer and Shaw whip him into the corner where he hits a big splash on Aldis. Things quickly break down as they fight over the pin attempt, and it allows Aldis to get back on the offensive. Aldis gets a near fall and flapjacks Shaw onto Latimer, then Aldis and Latimer have a faceoff before they slug it out.

Shaw and Murdoch trade punches in the corner, then Aldis takes Latimer down and they fight on the floor. Murdoch dives on everyone from the top turnbuckle, which gets a “holy shit” chant from the fans. Murdoch is grabbing his knee as he gets up, while Latimer spears Aldis in the ring. Shaw pulls the referee out of the ring to break up the pin, then he goes under the ring while the other three competitors do a Tower Of Doom spot in the ring. Murdoch is slow to make the cover and only gets two, then Shaw comes back and whips Murdoch into the guardrail. Latimer gets a near fall after a moonsault, then Aldis puts Murdoch in the Figure Four. Latimer drops Aldis with an Implant DDT, Shaw superkicks him and tries to kick Aldis, who counters with a Stunner. Murdoch breaks up the pinfall and lands a clothesline, then he heads up top but he knee buckles and he gets caught on the top rope.

Murdoch falls down and Latimer hits a pop-up powerbomb for two, then Aldis takes him out and goes for a Clover Leaf. Latimer kicks Aldis and gets backdropped to the floor, then Shaw superkicks Aldis and charges the ropes. Aldis pulls them down and sends Shaw to the floor, but Aldis stands up and gets caught with a top rope bulldog by Murdoch, who makes the cover. 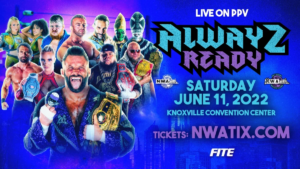